First-class men and women dressed up nightly for formal dinners on the Titanic. Gentlemen attending an Edwardian era (1900-1910s) or Titanic themed evening event will want to don their best for the night out. Here is a guide on how to dress men for an Edwardian evening affair. Cutaway Coat as part of the morning suit

Cutaway coats were a semi-formal coat option. Cutaway coats, also called morning coats in their less formal fashion, feature long rounded jacket fronts that button with one button for closure.  They could be worn for formal day wear such as a business meeting, morning wedding or sporting event like horseraces.   The shoulders were padded and arms full for a masculine Edwardian shape.

Morning suits were worn with wool or cassimere striped grey and black trousers. This style was very common in Europe although it didn’t catch on in America. Any other solid-colored pant could be worn as well although it looked too similar to men’s informal sack suits. A wingtip collar white shirt with a necktie and a vest of black, grey or buff was also worn. Shoes were lace-up boots in black or two-tone spat top white over black boots. Grey shoe spats could also be worn over boots or oxford shoes.

Add a cane, gloves, pocket square, and top hat and you’ll look handsome strolling Titanic’s Deck. For online options look here or at the end of this page. 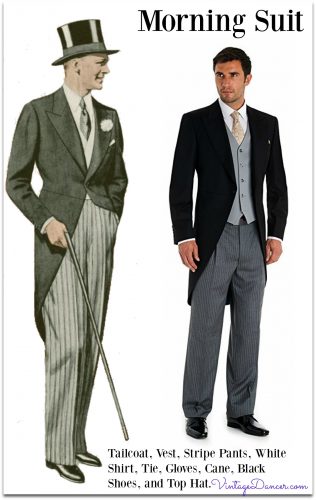 Gentlemen’s ‘White Tie’ formal wear consisted of a black tailcoat jacket and pants, white waistcoat, black silk top hat, black patent shoes, and white bow tie. Unlike modern suits, the wool fabric was very thick and heavy. This kept the shape very stiff and fitted meeting social requirements for pomp sophistication. The fit, however, was roomier in the arms and shoulders compared to the Victorian era.

The cut of the tailcoat was fitted to the body, emphasizing a waistline at jacket edge. Special undergarments helped shape a man’s belly much like corsets did for women. Shoulder pads were added to enhance the masculine shape.

The tailcoat jacket came in both peak and shawl lapels. The edge of the jacket bottom pointed downward a bit rather than straight across. Although the jacket never buttoned close there were three buttons placed on each side of the jacket opening for decoration. Matching wool weight trousers sat high on the waist (above belly button level) and tapered down to the top of the ankle. Pockets were not necessary for formal wear and usually left out. There was a sharp pressed crease down both the front and back of the pant legs. Sometimes a single or double stripe of silk fabric ran along the outer side legs. This stripe is what has remained on modern tuxedo pants today.

Formal shirts were starched white bib front button down dress shirts with a wingtip or high stand collar. Softer, pleated front shirts, were a less common option and usually consider too informal and “sloppy.” Mother of pearl shirt links and cuff links were the only jewelry found in formalwear.

The formal white shawl collar vest in the U shape was now considered too old fashioned. Instead,  the wide V neck vest became the new item to wear. Made of white pique it also lost the rounded bottom edge in favor of two points. Unless you get a custom made tailcoat in the Edwardian style then you probably will have to settle for wearing modern versions of the suit. Thankfully modern tailcoats are made of much lighter fabrics and fit a little looser for your comfort. Usually, a suit rental store for weddings will either carry a modern tailcoat suit or be able to order one for you. For online options look here or at the end of this page. The third coat option for formal/semi-formal occasions is the Dinner Jacket or its’ similar modern cousin the Tuxedo jacket (American name.)  They were worn for most dressy occasions: the theater, dinner parties, dining out, etc. They were less welcome at the ballroom or ceremonial events although after World War 1 these rules had to be relaxed. The 1900-1910s tuxedo coat is a formal black sack coat with either a wide rounded shawl collar or pointed peaked lapel with a straight edge or slightly rounded edge. Usually, the collar was faced in silk with various textures such as basketweave, stripes or diagonal ribbing. Pockets were flap covered or corded besoms. The skirt of the tuxedo jacket hung down to mid-thigh.

Unlike tailcoats, the tuxedo jacket could be worn with white, black or slate grey single or double-breasted vests and bow ties.

Edwardian Dandy’s wore double-breasted medium grey or dark blue coats and pants instead of traditional black. In Summer they might wear an all-white tuxedo suit. The standard cufflink for Edwardian formal occasion was an inlaid pearl. Mother of pearl and pearl link gems called Moonstone were also common. Gold or gold plated brass were more common for day wear. Both round and square shape cufflinks existed. You will need a french cuff or double cuff shirt to wear cufflinks. Shop men’s accessories.

Gentlemen always wore gloves. Colored gloves of black or grey were acceptable for daywear while white, or off-white cream-colored gloves were a must for formal wear. They were usually made of kid leather and had a mid-arm length. Today it is hard to find kid gloves so standard white wrist length or longer fabric gloves with a button cuff would be acceptable.

Tip: Wear gloves at all times. The only time gloves would not be worn is while food is going into the body or coming out of the body : )

They are not just for magicians with white rabbits! The mandatory hat for formal events was the silk top hat. You might be surprised that these hats were collapsible- meaning they could be pressed down into an almost flat shape for transportation. They were made of silk. Today you mostly see them made of satin. On a budget, wool felt top hat will work. The hats were rather tall but not quite as tall as Abe Lincoln’s stovepipe hat. Shop men’s hats.

For tailcoats and dinner jackets a slip-on patent leather pump with a flat bow was the ideal evening shoe. For dancing the new lace-up oxford in a patent leather was preferred.  For morning suits, the two-tone spat top button or lace-up boot was dressy enough for streetwear. You can find all of these styles today. Shop Edwardian shoes and boots and men’s formalwear. The final touch on your formal suit is the white pocket square. This is not to be used as your handkerchief. Pocket squares were for decoration only. They were folded into a triangle and placed inside the front heart pocket with the pointy end facing up. Usually, they were made of silk.

Here are some options for new  formal clothes that can work for the Edwardian era:

We are Debbie and Oscar, your guides to dressing up like decades past. We are here to help you find clothing online and learn about vintage fashions as worn by everyday people, just like you. Need help with your outfit? Ask us anytime.
« Art Deco Shoes Styles of the 1920s and 1930s
1930s Men’s Shoe Styles, Art Deco Era Footwear »