Women’s 1920 nurse uniforms, maid dresses, and waitress or servant uniforms reflected some of the fashionable trends of the day. The post-WWI years led to a rise in the hemline, first to the ankle, then calf, and up to the knee by the end of the decade. Dresses buttoned all the way down the front to make putting them on and taking them off easier for the working woman. Pockets were always included, first at the breast and later by the hips. Sleeves were long and cuffed at the wrist.

The general shape of the 1920s nurse uniform was long and slender. Collars started out as wide and fold out over the shoulders but moved to wide and long to aid the lean ’20s silhouette. 1920s Nurse Uniforms were usually white and made of cotton chambray or linen. Ladies wore white stockings with their uniforms and black heels such as a basic single strap Mary Jane.

Of course, each hospital and each country had its own take on a nurse’s uniform. The following are generic nurses uniforms sold via catalogs such as Montgomery Ward and Sears. Patterns were also available for the home sewer. 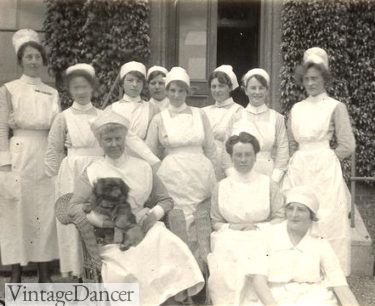 1920 Nurses uniforms in Morocco: Love in Times of War – Note the blue pinstripe blouses and skirts. Receiving her Diploma in Nursing degree 1920

Housemaids and waitresses well as other working women in the service industry (cooks, nannies, laundress, shop keepers) were required to wear a certain uniform provided by the employer, or purchase a general uniform sold in department stores and mail-order catalogs. Uniforms were either white or black with white collar, cuffs, and aprons — however, striped blue or pink cotton was still being used in the early 1920s. By the mid to late ’20s, uniforms were often in more colors such as rose pink, light or medium blue, lavender, and violet.

Some hotels, cruise ships, and larger households (think Downton Abbey) distinguished staff by the color of their uniform.  Fancy restaurants kept waitresses in black and white uniforms to match that of the tuxedo-clad waiters.  Bars and nightclubs also patronized the black uniform, although any dress in black was acceptable. Casual daytime establishments were less restrictive about color. 1928 maid or housewife wearing a white half apron 1928 black dress, white cuffs and collar and a white half apron with shoulder straps A house maid helping a bride get dresses. 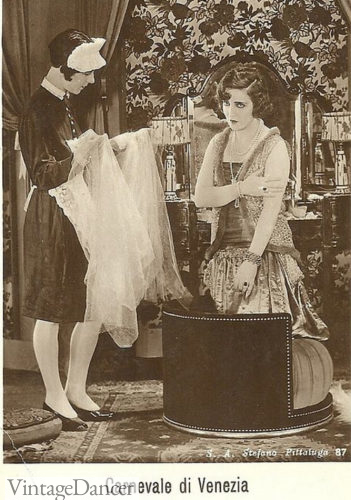 1928 waitress with pinned on apron over a black dress 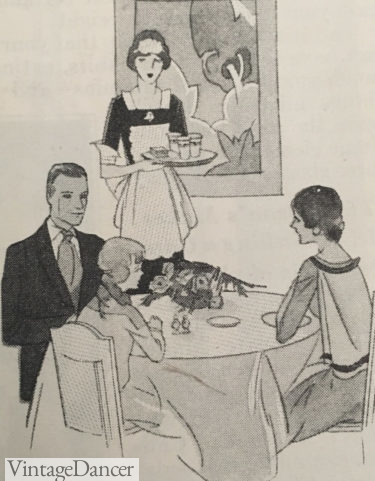 Waitresses at the Carlton Hotel, 1925, still wearing traditional aprons and caps from the 1910s

We are Debbie and Oscar, your guides to dressing up like decades past. We are here to help you find clothing online and learn about vintage fashions as worn by everyday people, just like you. Need help with your outfit? Ask us anytime.
« 1950s Womens Suits History and Pictures
1920 Fashion Year Clothing for Women and Men »