The stock market crashed, and with it prices of clothing and accessories dropped dramatically. A dress that cost $24 in 1928 cost only $4 in 1931. Budgets were being stretched very thin, and clothing designers had to make cutbacks in design and material quality. For 1930s jewelry, the same economical reductions were being made, yet because of the glamorous Hollywood effect, more women were wearing more jewelry. Jewelry trends shifted from simple to extravagant. Sparkling 1930s jewelry styles in the form of necklaces, pins, earrings, dress clips, buttons, buckles, and bracelets were made cheaply with faux materials such as painted glass instead of real pearls or bakelite, a form of plastic, instead of gemstones. Rich looking 1930s women’s jewelry was necessary to making a poor dress look like a million dollars. This illustration from 1937 shows geometric lines, with simple clips or brooches adorning the necklines.

The genuine gems that costume jewels were imitating would be incredibly expensive to purchase. However, with imitations using clever new technologies and processes, suddenly everyone could adorn themselves in glittering gems and strands of beads and wear them all day long. Dress makers often sold coordinated jewelry with each dress. Many dress makers were also jewelry designers (like Coco Chanel).

Jewelry designers, who sold to Hollywood where they were mimicked and mass produced, looked to the latest modernistic (now called Art Deco) movement for design inspiration. Unlike the 1920s, when jewelrywas long, thin, light and delicate, 1930s styles returned to heavier origins in the Victorian style. Shapes were angular — squares, rectangles, or ovals set in black and silver settings. The main difference between Victorian and 1930s jewelry was in the variety of colored gemstones offered: ruby red, amethyst purple, topaz orange, emerald green, aquamarine blue, as well as black onyx. Throughout the decade, designs shifted from dark and heavy to silver, white, ivory, and clear diamond sets. Even gold set gemstones came back in fashion by the end of the 1930s, something that hadn’t been seen since before 1900.

Here is a visual exploration of the most popular styles that ‘everyday’ people favored.

One of the most prevalent styles of costume jewelry during the 1930s was sparkle – the more sparkle, the better! This trend was interpreted and utilized in a few different ways – the ‘white on white’ style and ‘paste’ being two of the most popular. One of the reasons that sparkle became so popular during the 1930s was the rise of the silver screen. Increasingly, more people were going to the movie theaters to see the latest releases – which would be in black and white.

This meant that clear gems and jewels stood out on the movie screen more prolifically than colored stones and gems. Costume and set designers realized this, and so began bejewelling their stars in densely concentrated sparkling stones. This trend filtered through to the movie-going audiences. Clear gems were set into pale silver, white gold, and platinum fittings in order to mimic the trend.

Rhinestones, the affordable diamond alternative, could be worn anytime of day.  In 1936, Sears catalog advertised: “Nothing adds to the costume more than a rhinestone ornament. Adding a brilliant buckle or clip to a dress gives it an entirely new appearance. Sears offers the newest styles, most modern designs, copied from expensive Paris creations. Only the finest rhinestones are used. They are set in highly polished metal mountings, closely resembling platinum. ” Recreate the 1930s sparkle trend with these vintage-inspired pieces.

To achieve maximum sparkle, stones were set closely together or were produced using ‘paste’. In the 17th and 18th centuries, paste was used in a similar way to the early 20th century costume jewelry – to imitate real gems. Back then, even if genuine gems could be afforded, replicas were often made to safeguard against theft. Lots of sparkle and shine in this movie costume from The Gay Divorcee, 1934.

Paste was made from ground glass heated with other elements and mixed to form a paste – hence the name. It became an incredibly popular method of producing imitation gems and would remain so for the next few centuries.

As women began waving and curling their hair into the new styles of the decade, there was a growing desire for decorative hair clips and combs. Finish your 1930s waves with one of these beautiful vintage inspired clips or combs.

Many of these were in the popular sparkle style, featuring paste set into geometric Art Deco shapes and styles. Women wanted to add sparkle and shine wherever they could, and of course, the hair became the perfect place to do so. Similarly to hair clips, another type of clip flourished in this decade – the dress clip. The double clip began to be worn in the 1920s and continued to be worn for the next 20 years or so. Clips were available separately or as a pair, or came interlocked as a duo mounted on a brooch-backed frame. An example of how dress clips were worn, decorating the neckline.

If the clips came on a frame, this allowed them to either be worn separately – perhaps either side of a neckline, or together as a statement piece in their frame. The versatility of the dress clip proved almost endless. Clips adorned necklines, hats, handbags, scarfs, and were sometimes clipped onto the backs of low cut dresses.

Today, reproduction dress clips are difficult to obtain, although vintage clips can still be found. To imitate the look of dress clips, perhaps purchase two identical brooches, which can then be pinned onto necklines to recreate the Deco style. See vintage 1930s dress clips on Etsy.

During the Art Deco period, stars and moons were frequently seen in jewelry and accessory designs. Chanel was so inspired by star motifs, that she designed jewelry in the early years of the decade with beautiful clusters of shooting stars. Stars and moon shapes became popular in the 1920s but continued in popularity through to the early 1940s – as the 1941 film Ziegfeld Girl demonstrates.

This picture of Hedy Lamarr shows her in costume for the 1941 film Ziegfeld Girl, a movie which was set in the 1920s. Hollywood’s fascination with star and moon shapes continued for the next few decades, but remains a style typical of the Art Deco era. Pearls have been popular for centuries, and even today are still a favored choice of jewelry. Given a new lease of life by Chanel in the 1920s, long strands of pearls suddenly became popular once again. Pearls were not only present in necklaces, but also in brooches – sometimes incorporated with the ‘white on white’ paste style, earrings and bracelets. Pearls really are a timeless jewelry item and can be worn in so many different ways – perhaps proving why they are still so popular. Pearls were versatile and popular in the 1930s, and have remained so to this day.

The bracelets of this decade were varied, sometimes sparkling with paste set as imitation diamonds, or sometimes as a simple bangle style. The actual fit of bracelets tightened during this era, mostly due to Hollywood. 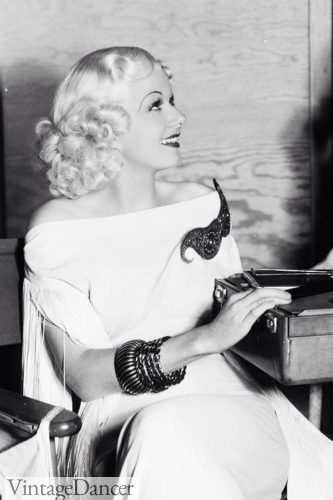 Movie studios did not want their actresses creating the unwanted sounds of bangles and bracelets clanking together. Therefore, bracelets were worn tighter on the wrist to minimize movement. 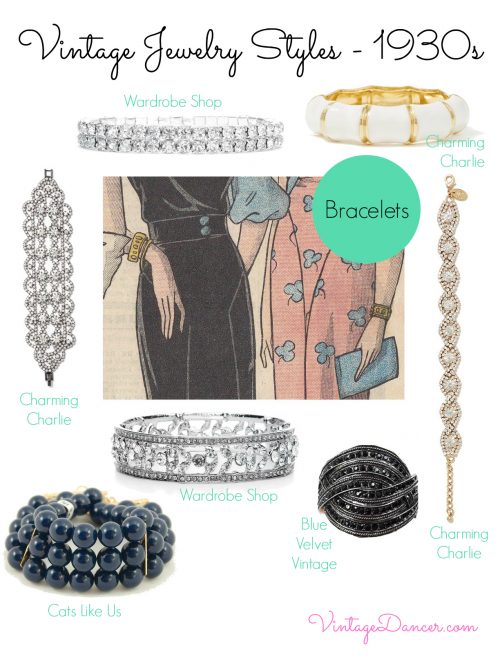 Bracelets were tight fitting during the 1930s, some were worn as a cuff style, whilst others were delicately linked paste styles.

In contrast to the ‘white on white’ trend, towards the end of the decade, we start to see new styles and trends emerging. Colors began to become popular again, women wore long strands of colored glass beads around their necks, coordinating with their gowns. Beads were worn long, continuing the sleek deco lines of the period.

The lengthy beads dangling from the neck were a typical feature of the 1920s and 1930s. The long lines of the beads mimicking the straight geometric lines of the period. Towards the end of the 1930s, bright colors and hues started to be worn.

Earrings of the decade were clip-on or screw-on, an important feature to note if shopping for true vintage. The practice of piercing ears dropped dramatically out of favor in first few decades of the 20th century. It was not until the 1950s and 1960s that pierced ears gradually became socially acceptable again. Birds, feathers, flowers, and leaf designs all became popular in the mid to late 1930s. Perhaps the most popular of this style is the ruby and diamond feather brooch by Van Cleef & Arpels, given to Wallis Simpson in 1936. Towards the end of the decade, styles became more naturalistic, moving away from the earlier geometric shapes and sparkle. These delicate glass earrings by Sofia’s Garden are perfect for a late 1930s style.

The end of the 1930s also started to see the trend for ‘novelty’ costume jewelry, a style explored in the next article.

Lastly, although perhaps not strictly jewelry, make-up compacts deserve mention. By the 1930s, make-up had became socially acceptable, and even fashionable. This led to beautiful designs of powder and mirror compacts being produced. Women wanted to ensure that their make-up was still in place when they were out and about, and they wished to do it in style. This compact from Besame is a beautiful work of art, definitely worthy of being seen in public at any opportunity! The makeup is fabulous as well.

Today, the make-up market is flooded with styles of powders and compacts, although few are vintage in style. Look out for a sturdy case, and check that the compact can be refilled.

More women wore jewelry in the 1930s than they did in the 1920s, especially in the daytime.  Consider these pairings: How I pair 1930s accessories

We are Debbie and Oscar, your guides to dressing up like decades past. We are here to help you find clothing online and learn about vintage fashions as worn by everyday people, just like you. Need help with your outfit? Ask us anytime.
« 1950s Men’s Fashion History for Business Attire
Men’s 1950s Casual Clothing History »