The late 1930s house dress styles continued into the 1940s with cute puff sleeves, ruffle trim and heart shaped pockets. Cute, is the best word to describe the war time house dress.  Prints were cute, colors were cute, trim was cute. The child-like designs were inspired by the traditional Austrian pinafore fashions. Innocent and charming, the house dress distracted women from the looming hardships, loss and and burden war brought to them.

Because of war time restrictions and limited fabrics as well as clothing budgets, 1940s house dresses could be worn at any time of day and even out in public. Women usually avoided wearing an old or dirty house dresses outside of the home. A new house dress may have been worn to the store or other informal outing. Children and teen girls wore them all day too.

The lines were blurring between all styles of 40s dress but it was the house dress that inspired early 40s fashion the most. 1946 “gay in the kitchen, smart enough for visitors” house dresses

The 30s house frock with wrap back and tie belt was almost out of fashion in the 1940s. Instead there was the apron style house dress. It slipped on overhead and a had a tie back sash that tightened in a bow at the back. The sash could be worn looser for maximum mobility or tight for a hour-glass waistline. Short puff sleeves, an a-line skirt, and uniquely shaped pockets add to the apron-like appearance. Most dresses had large rounded collars or pointed collars trimmed in ruffles, rick-rack or piping. 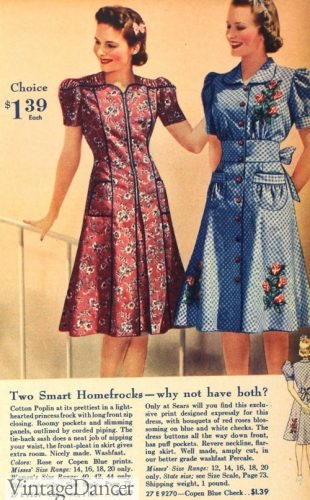 The slide fastener or zipper front house dress was another carry over from the 1930s that remained through 1942 but because metal was needed for the warfront they became unaffordable.  After the war they returned again appearing on plain house dresses and work uniforms. Similar to the apron style was the pinafore house dress. It looked like an apron with two patch pockets on the hip, a wide waistband and wide top straps. In summer is could be worn sleeveless while in spring or fall it was worn over a cotton blouses. Some models came with an attached blouse.

Vertical stripes or plain colors with ruffle straps were the most common patterns. In other colors and novelty patterns it was equally charming as a daytime summer dress. Teen girls loved them the most.

If there was one house dress style that defined the 1940s it was the shirtwaist dress. Worn as a houses dress, a uniform, a daytime dress and even some party dresses. The house dress buttoned up the full length of the front while daytime styles may have only buttoned the bodice.

Skirts were wide A-lines and collars were masculine inspired notch lapels or shirt dress style collars and the girly- round peter pan collar.  Non-collared dresses used the very high sweetheart neckline or round neckline trimmed in piping or rick-rack.

House dress patterns were plentiful. The traditional candy stripe, polka dot and gingham prints remained classics. Small florals were as lovely as plain colors trimmed in white or contrasting piping, buttons and collars.  Whatever color or print made a woman smile was her chosen house dress material. 1941 a shirtwaist bodice dress could move from housewear to daywear The hype over the Kitty Foyle dress ended after the war but for women in service (maids, nurses, waitresses, nannies, factory workers) the style continued. 1943 house dress or uniforms? Both

The concept of the wrap dress as a house dress wasn’t a new one but in the 1940s it had a revival and became the second most popular style. A large shawl wrap over collar crossed the bodice and buttoned at the waist. A tie front belt bowed in front or back. Dresses had one pocket on the front right side.

They were touted as “easy on” and “easy to iron” since they folded out flat.  They took on a new name, brunch coat.  Like the floor length housecoat it could be wrapped over sleepwear like a robe and worn around the house to make breakfast. As a house dress it was pretty enough to serve “brunch” in when guests were over.  And it was stylish enough to cross over into summer daywear.

The demand for brunch coats increased as he decade moved into the 1950s. Hemlines lengthen, prints because more “modern,” lapels touched the end of the shoulders. The full-length housecoat could be worn around the house but was not a work dress nor day dress. It fit into the sleepwear/robe classification. 1946 floral housecoats- a cross between a dress and robe

Since most 40s reproduction brands focus on dressier dress styles finding a housedress can take some effort. Shirtwaist dresses are plentiful and make excellent house dresses if you find one in a cute print and cotton fabric. Look here for daywear and house dress options.

Sewing a 1940s house dress is usually the best option for accuracy and more fabric selection. You can choose a quilters cotton but I prefer to look for a softer cotton with a nice drape.  Old bed sheets work very well too.

Some 40s daytime/house dresses for sale: 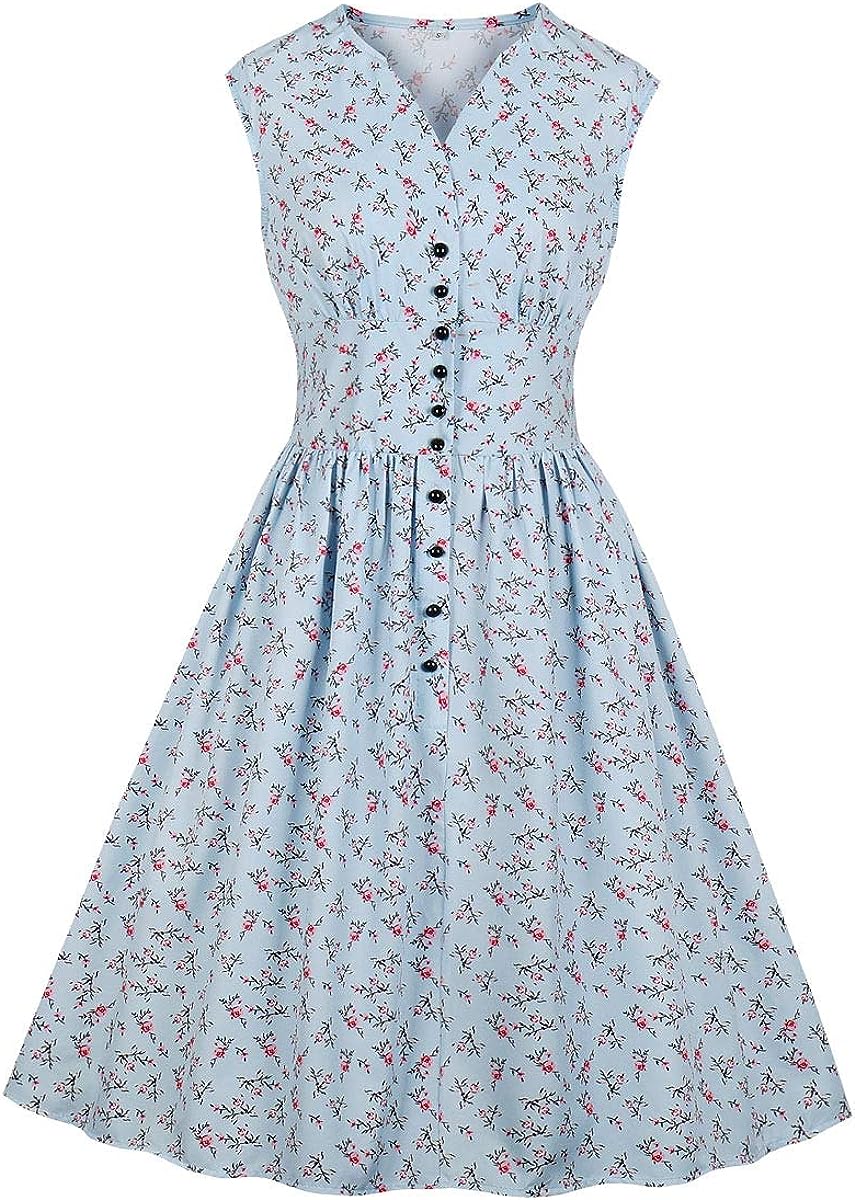 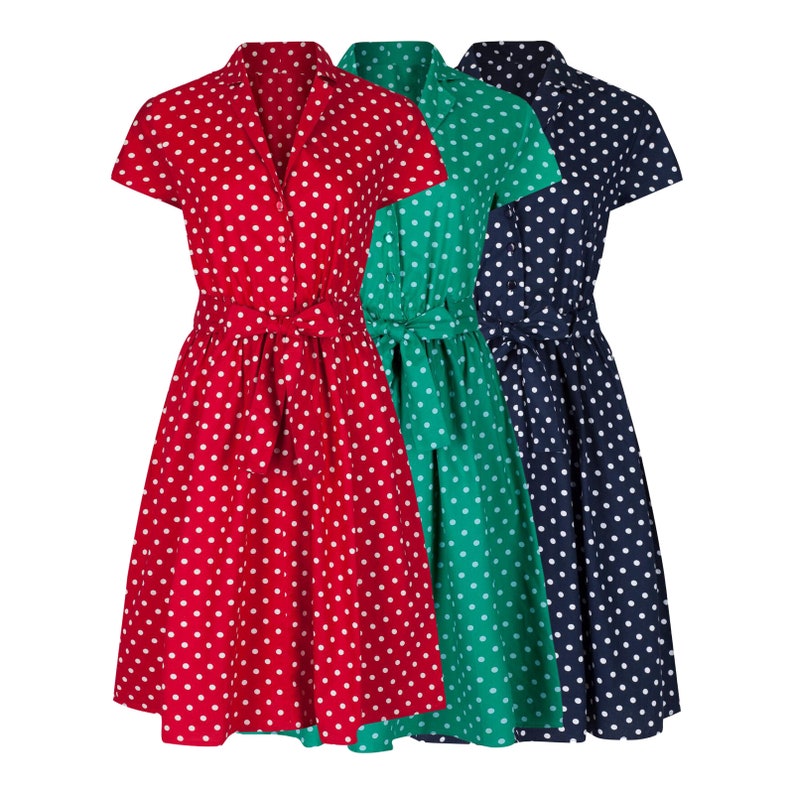 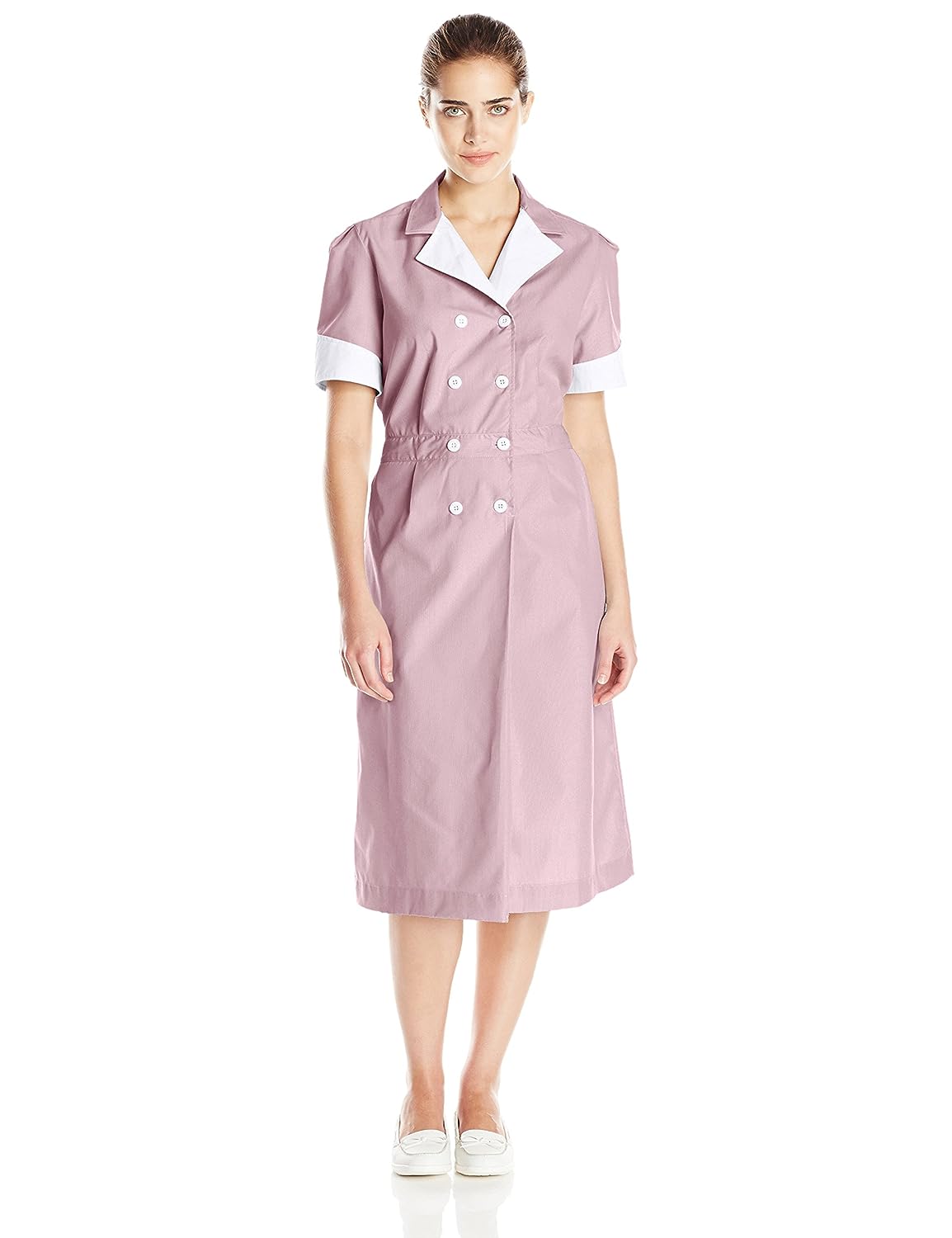 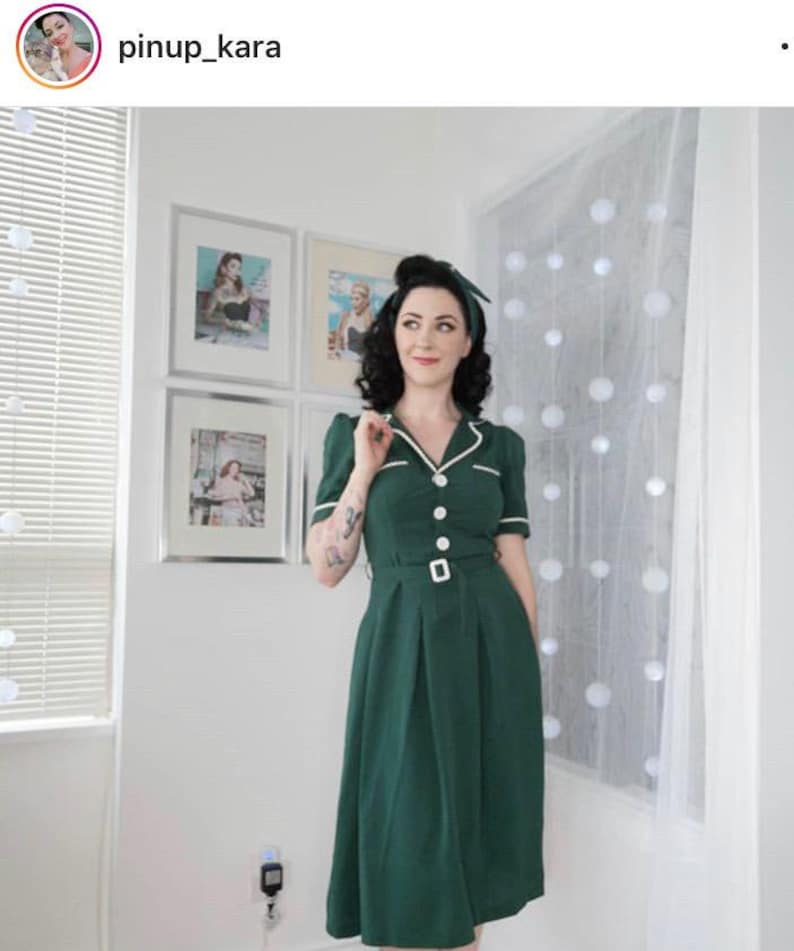 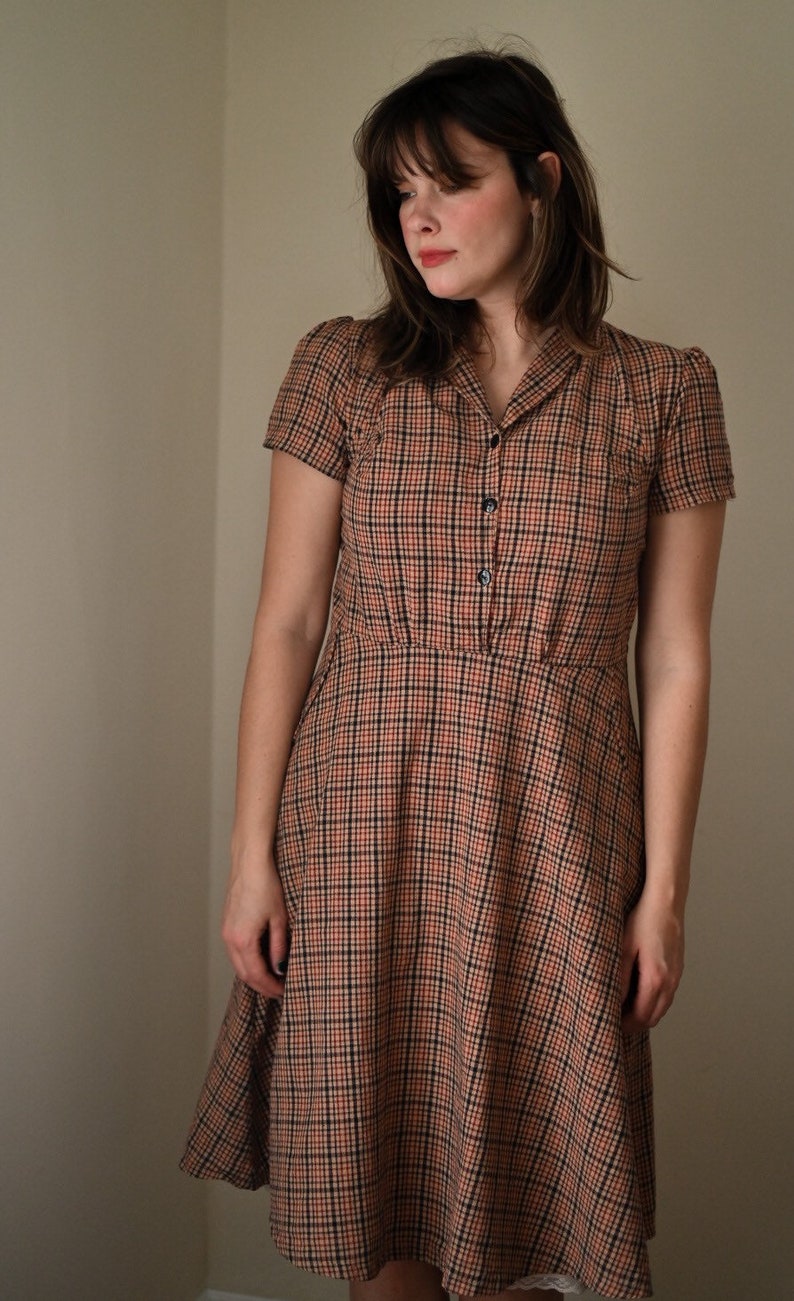 We are Debbie and Oscar, your guides to dressing up like decades past. We are here to help you find clothing online and learn about vintage fashions as worn by everyday people, just like you. Need help with your outfit? Ask us anytime.
« 1950s Men’s Summer Outfit Ideas
1950s Apron History: Tea Apron, Half Apron, Cobbler Apron »