The most iconic look of war-time was the 1940s women’s two-piece suit. In the United States, it was patriotically called the victory suit. In Britain, it was the utility suit. The suit was practical and versatile, worn as often as dresses. The jacket and skirt could be mixed with other pieces, and a different blouse underneath could change up the look. The overall style did not change throughout the war so that women wouldn’t have to keep up the expense of wearing the latest fashions.

The 1940s suit was popular for daywear and office workwear, and could even be dressed up with hats and jewelry for dinner or the theater. The suit was often a woman’s nicest clothing item. Many women wore a suit as their wedding attire instead of an expensive dress. The look itself was carried over from women’s suits that popped up in the ’30s, but with some major differences to accommodate clothing restrictions.

The most commonly used fabrics for women’s 1940s suits were wool-weight rayon, wool blends, and lightweight wool. Limitation order L-85 said that the fabric for skirts must be non-wool or wool of 9-ounce weight or less. After the war, factories were full of wool used to make men’s uniforms, and the cost of wool suits decreased dramatically. There wasn’t a wide color range to choose from because of dye restrictions during the war years, and most suits were in practical colors like black, grey, navy blue, green, brown, and red. Plaids and checks were also very popular, as were pinstripes on black, navy, or grey. Most suits came in a matching set although mixing solid and print jackets and skirts was common practice. For jackets, the sleeve length was restricted to 30 inches, only single collars were allowed, and they had to be single-breasted. Jackets were generally short, falling between just below the waist and just above the hip up until 1942.  Longer jackets, extending down to the upper thigh set the style for the rest of the decade. 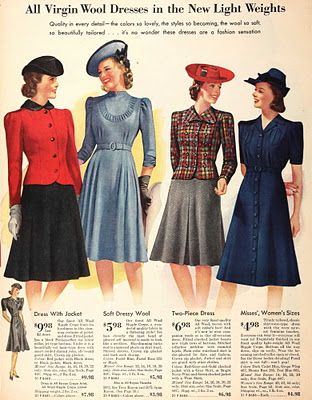 Suit jackets could have anywhere from one to seven buttons, with the numbers in between being most popular. The sleeves could be full-length or short-sleeved, but a ¾ length was used often in spring and summer styles. Collars were pointed, usually small with thin lapels. Many jackets had no pockets, while others had two, one on both sides. Fabric for patch-style pockets was restricted, so they were small or were inside slit pockets. The jacket was fitted, somewhat narrower at the waist, and smooth over the hips. It was often unlined, although it wasn’t a requirement in the States. No jacket would be complete in the ’40s without shoulder pads. They stuck out sharply, with square ends, giving a military feel to the look.

1948 Suit with bolero jacket worn to her wedding

Another popular option for the suit jacket was the bolero. It would be made from the same material as the skirt, just like the other jacket. However, the shape was somewhat different. The bolero jacket was waist-length or even a little bit shorter with long straight sleeves. The front opening had rounded edges. Many times there would be no collar on this jacket, but it could have a rounded one that extended into thin, rounded lapels. There were often no fastenings on the bolero, and it would be worn open. It could also have one or two buttons to close it and would be worn closed. A blouse would always be worn under this type of jacket. A third jacket alternative was the peplum jacket, which usually matched the skirt. It was fitted in the bodice and flared out from the waist and was wider at the bottom of the jacket. The peplum could be anywhere from a few inches long to finishing at the hip. It usually had long sleeves and buttoned down the front. A blouse was worn underneath this jacket as well.

Some lighter weight jackets came with a matching self fabric belt in the mid to late ’40s. The belt cinched in the waist slightly, giving the look a softer drape. At this point, the suit was merging back into the two piece tunic dress style of the 1930s. Skirts were more restricted by L-85 than jackets. They could have no more than a 78 inch sweep (although for suit skirts it was generally much less than that), could not be lined, could not have belts or  belt loops, and could not have pleats, tucks, shirring, or gathers at the waist. This made for a straight, fitted skirt (but not tight by today’s standards – it would be more of an A-line shape, not a pencil skirt).

In the United States, the skirt often had one or two pleats in the front and a kick-pleat in the back to allow for easier movement. For the first time, short was in! Skirts sat at the waistline, fell to just below the knee and had no pockets. They would fasten on the side with a metal zipper and button at the top. As metal grew scarce during the war, buttons were reverted back to as fasteners, also on the side. The skirt almost always matched the color of the jacket and could be worn separately with blouses or sweaters. If the skirt didn’t match the jacket, a combination of a plaid jacket with a plain skirt could also be worn.

Late ’40s skirts utilized a fuller fit at the hem. Box pleats and accordion pleats added some fullness even though the overall A-line shape remained.  The opposite of the full skirt was also emerging around 1947. The straight skirt took the flare of the hem. Kick pleats were a must for walking in straight skirts. These were by no means body hugging pencil skirts.

A woman’s suits were her uniform during the 1940s. Even after the war ended, the suit remained the most practical and durable piece of clothing a woman owned. Its versatility to mix and match with blouses and skirts rendered it a necessity for all women. It was both her everyday look and her ‘nice’ clothing when mixed with a fancy hat, gloves and heels.  The suit was to continue into the 1950s and beyond, as the preferred work or business look.  We have the dutiful women of the 1940s to thank for its beginnings.

Vintage reproduction designs don’t make many suits nor do modern suit makers design with the 40s styles in mind. That makes finding a new vintage inspired suit difficult to find. I usually keep an eye out for 80s does 40s suits that look close enough or use a separate skirt, blouse and jacket (not matching) to create a 40s look that is acceptable to wear to the office. The following are some of the best choices currently available: 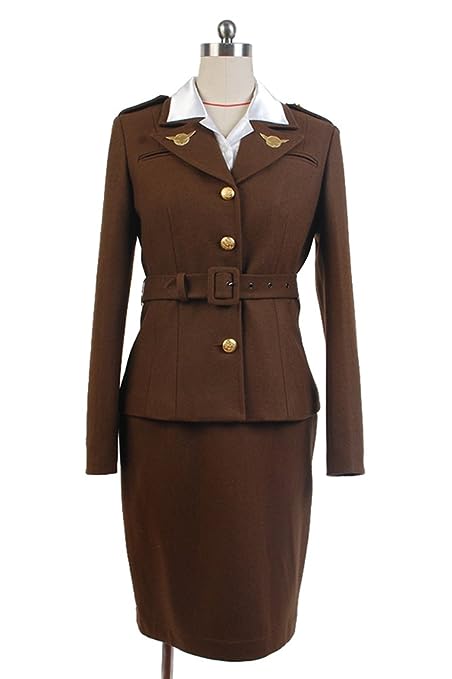 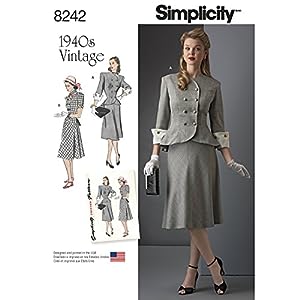 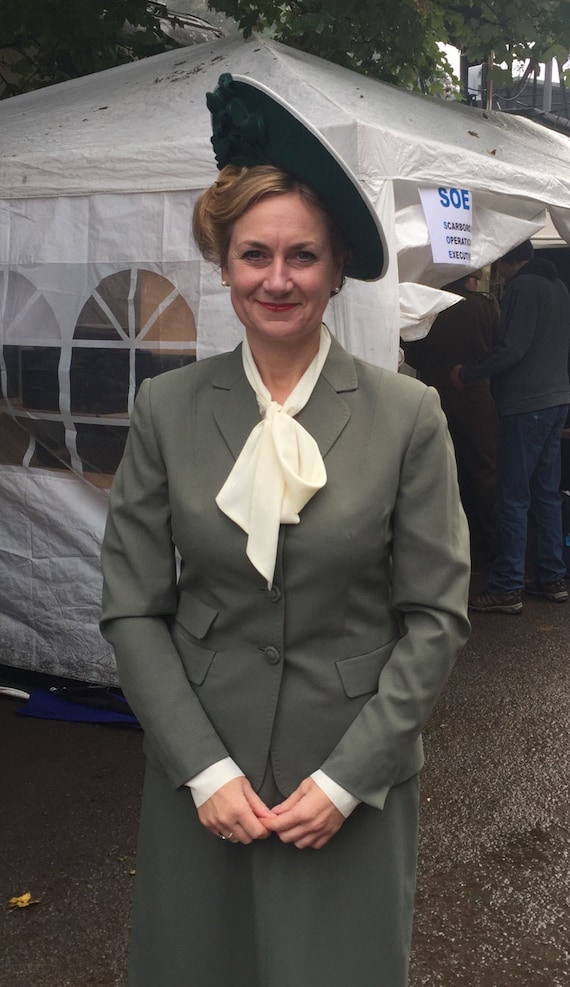 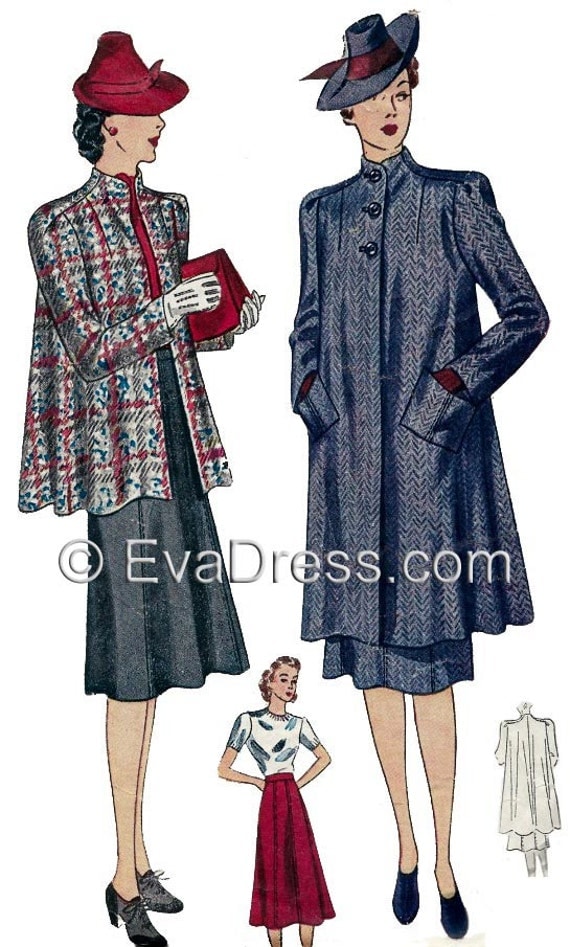 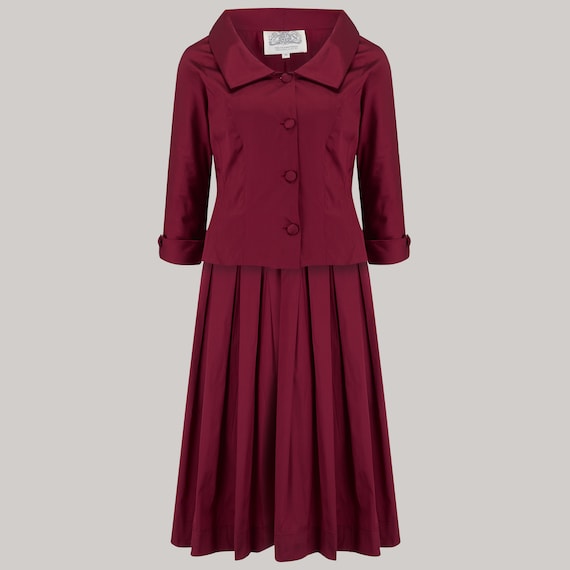 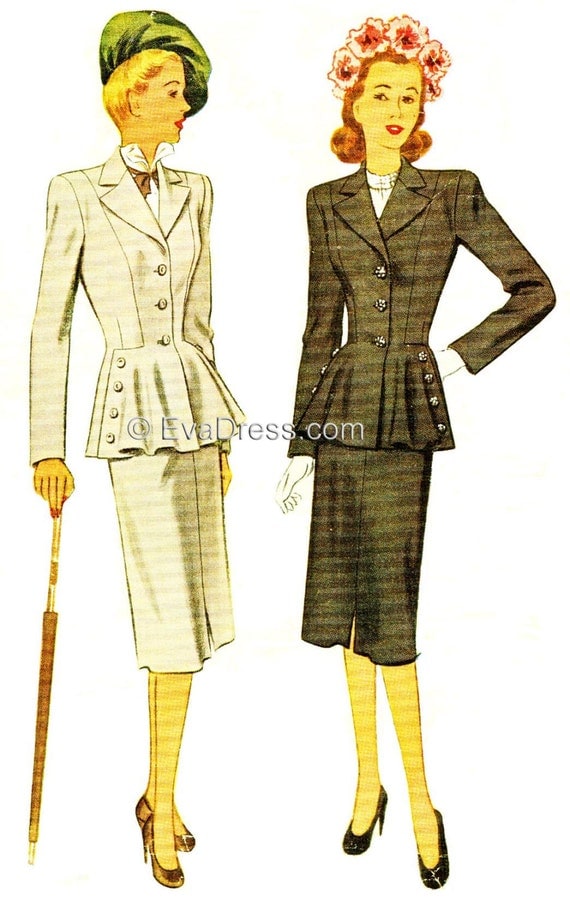 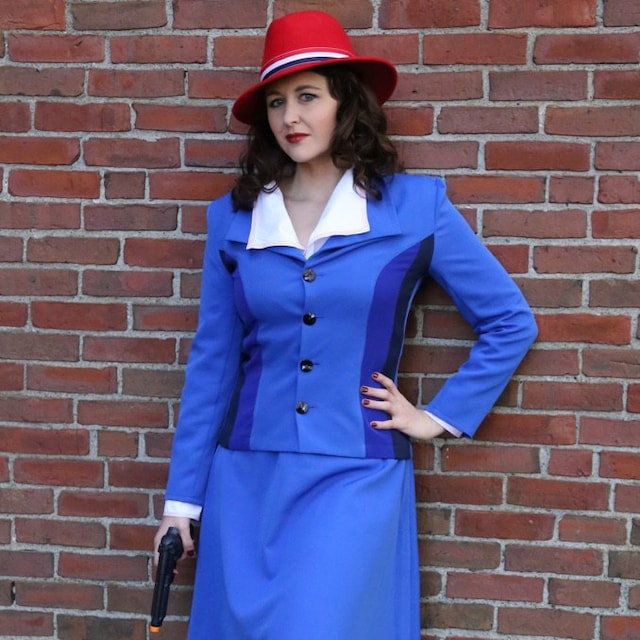 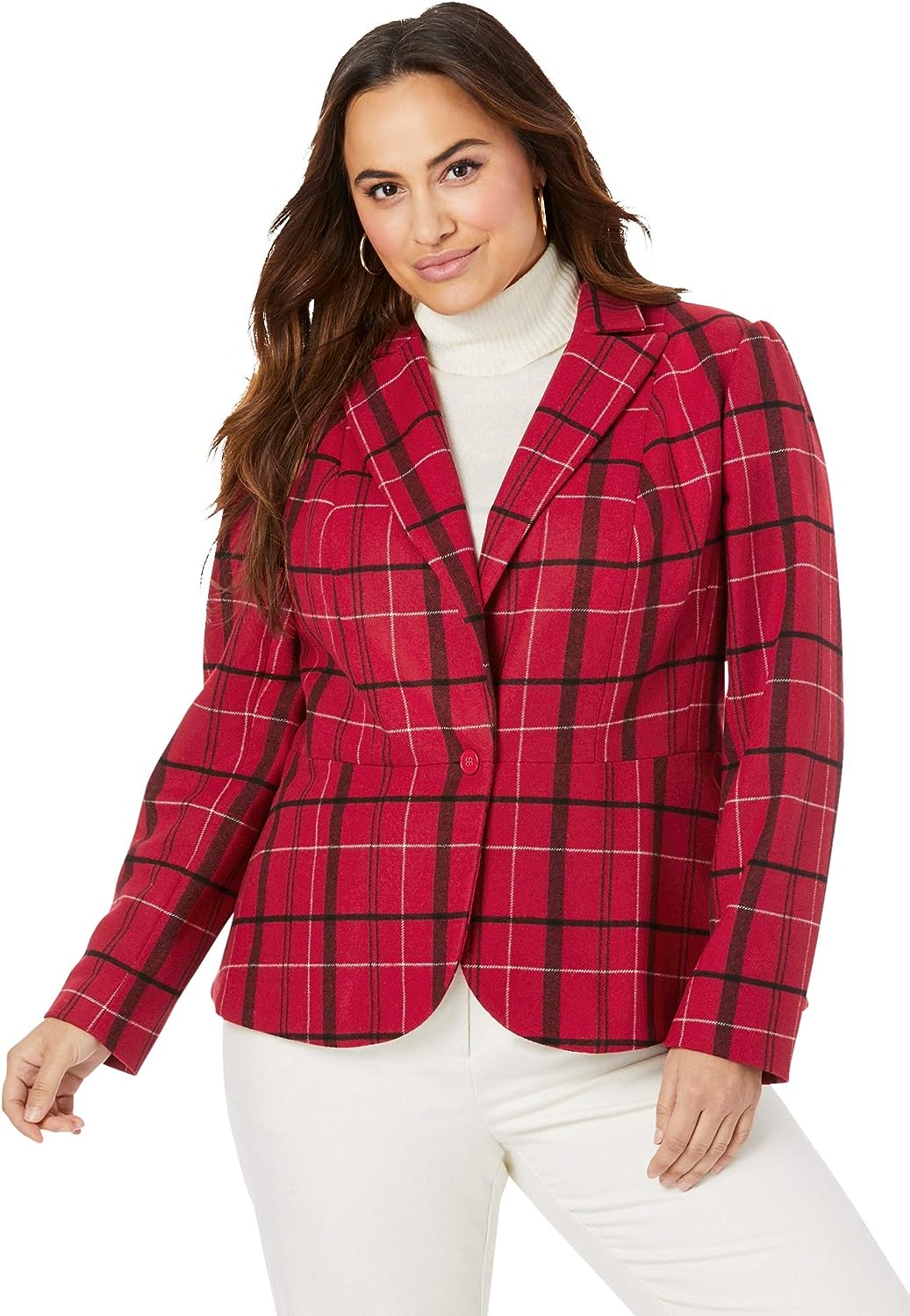 We are Debbie and Oscar, your guides to dressing up like decades past. We are here to help you find clothing online and learn about vintage fashions as worn by everyday people, just like you. Need help with your outfit? Ask us anytime.
« Vintage Children’s Clothing Pictures & Shopping Guide
1940s Zoot Suit Girls, La Pachucha History »