Although the world was in turmoil during the ‘40s, people did still get married! In fact, so many people did that there was an explosive Baby Boom after the war. However, 1940s weddings were not as formal as they were before or after the decade. Most weddings were during a 10-1pm brunch time, with a light meal and cake served after the church ceremony. 1940s wedding dresses and groom attire varied from business dress to very formal attire.

Jump to the groom’s section. A wedding dress made from silk parachute

Quite often the bride, groom, and wedding party would all simply wear their best suits and dresses. Some brides choose to make a new dress for the occasion with a color and design that would make it wearable again after the wedding. Rose pink was a popular choice for both brides and bridesmaids. While silk and satin were unavailable during the war, lace and tulle were not rationed, although still very expensive.

In the USA, rayon, satin, crepe, and taffeta were made available for sale as a way to boost morale during the tough times. After the war, white silk parachutes were released for sale back to the public and quickly became choice materials for 1940s wedding dresses and bridal lingerie. Wearing their mothers wedding dress or other close friend or family member was another popular option. Many used the old wedding dress to create a new design or if they liked it wore it as is. In some larger cities renting a wedding dress was an option too.  The shortage of wedding dresses was especially felt in the UK, where it wasn’t uncommon for dresses to be brought over from the USA and then worn at least by a dozen bride friends during the year. If the bride was a uniformed servicewoman, she would probably wear her best uniform, since they were not given civilian rationing stamps to purchase wedding clothes. For those who could afford to make or buy a 1940s wedding dress, the styles were similar to day dresses. They always had long sleeves and full skirts, but the ‘princess’ look was not achievable with the fabric restrictions. 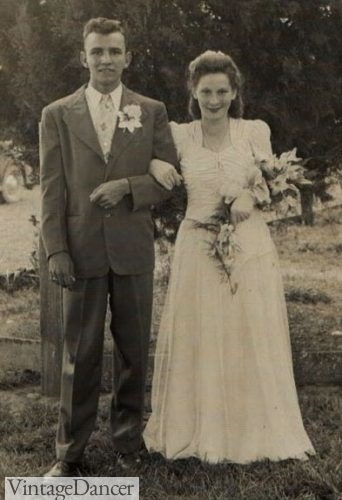 Another wedding couple. Was this ruched dress with tulle skirt is a late 1940s design.

Dresses usually had a sweetheart neckline and fitted bodice with fitted sleeves that were gathered or puffed at the shoulder. From the waist, a circle skirt fell to the floor. Long trains were a waste of fabric, but shorter trains were still allowed. Dresses were also pretty plain, missing any intricate embroidery or beading. The decoration went to the veil and headpiece. Brides always wore a long single layer net veil, often attached to a little pillbox hat pinned to the head.  A headband of seasonal flowers was another popular piece, with or without a veil. Headband flowers matched the bride and groom’s corsage and the bride’s very large bouquet. Common flowers were pink or white carnations, gladiolas, roses, and real or fake greenery such as silk leaves. Orchids were popular corsage flowers.

A white pearl necklace was the sole piece of jewelry worn by nearly every bride in the 1940s. Bridesmaids, if dressing up, would wear similar dresses to the bride. They often had short sleeves instead of long, and their dresses were of course not white. They would be a light shade of blue, green, pink, yellow or a pretty floral print. Bridesmaids often wore shorter veils, hats and flowers in their hair. They carried bouquets as grand as the bride’s. Shop 1940s style bridesmaid dresses. Flower girls were an optional wedding party member. They too wore dresses similar to brides and bridesmaids with floor length puffy skirts. They did not always match the bridesmaids. Page boys were dressed like groomsmen- usually in formal suits or velvet knickers. 1940s Wedding Clothes– For a 1940s inspired wedding, look here for dresses, veils, shoes and accessories.  For bridesmaid or mother of the bride dresses, look here. The 1940s groom and groomsmen’s attire varied greatly during the 1940s.  In the early year or when funds were short, men would wear their best suits — usually dark colors with double breasted jackets. A single breasted suit was fine if that was all he had. The suit was usually worn with a white button down dress shirt and colorful tie.

Black Oxfords were the preferred shoe with most suits. Two tone shoes were not worn — they were much to casual for a formal affair. If a groom wore a suit, so did the groomsmen and fathers. There was little difference between the men.

All male members wore a corsage pinned to the lapel. They were often white or yellow carnations or flowers matching the bride’s bouquet.

Servicemen wore uniforms during and after the war. They were usually the nicest clothing he owned.

Morning suits were traditional men’s business and special event attire. In the 1940s, they were hardly worn, except at formal weddings. What about male wedding guests? Read this article for ideas on what to wear.

We are Debbie and Oscar, your guides to dressing up like decades past. We are here to help you find clothing online and learn about vintage fashions as worn by everyday people, just like you. Need help with your outfit? Ask us anytime.
« 1940s Men’s Formalwear, Tuxedos, Evening Attire
Bulova Accutron – Men’s American Watch History »