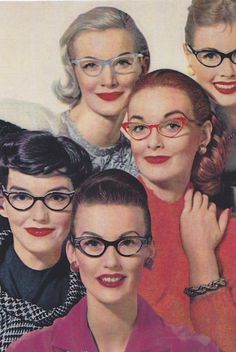 The 1950s were a decade where everyone was wearing sunglasses and eyeglasses — even if they didn’t need them. The most popular style were the 50s cat eye sunglasses with colorful plastic rims and a dab of sparkle in the upper corners. Other shapes like triangles, squares, hearts, and classic retro round sunglasses were trendy as well. For men (and some ladies), the horn rim nerd glasses were the way to go. The most popular vintage 50s sunglasses and 50s glasses are back on trend now making them easier to find. Pin up and rockabilly girls must have a pair for every outfit!

Scroll down or click here to jump to the history of 1950s glasses and sunglasses.

In 1953, journalist Lenore Hailparn wrote, “There was once a time, and it was not so very long ago at that, when a member of the female sex considered it a minor tragedy if a visit to the oculist led to the recommendation of glasses.”

Eyewear in the 1950s became equated with fashion over function. Choosing frames that fit the wearer’s face was important but now the style, color, and personality of the frames were talked about as if it was a new dress or another piece of fine fashion. 1950s glasses for those with a vision impairment were unchanged from the earlier years. Women’s glasses were round with a slightly more oval shape than men’s 50s glasses. They were either thin metal frames or brown/black plastic frames.  There was some stylistic difference between countries:

“Once an American takes to glasses, he makes them part of his dress and character, and he picks them as carefully as his suits. The Frenchman prefers dignified frames. The Briton? He does not care, when he wears glasses he’s thoroughly untidy. The latest styles in frames are the same in all three countries- so the Briton has only himself to blame!” – Woman’s Own 1953 The fashions that Americans favored were the new cat eye glasses, also called winged top or devils eye glasses. Initially, the cat eye shape was subtle but gradually became more and more narrow and pointed. Some went on to add sparkle to the upper frame and sides. A few brands carried interchangeable tops to color coordinate with several outfits or to go from day to night.  More elaborate frames continued into the mid 1950s. There were frames in a wide variety of color and finishes such as engraved flowers, mother-of-pearl inlays, contrasting colored plastics, or plastic flowers and animal placed in the outer corners. There were even plaid frames! Eventually, the choice between plastic or metal was decided. Both! Plastic and metal combined with heavy plastic on top and thin metal bottoms. It was the best of both materials. Lenses came in both glass and plastic, the latter being more expensive but better for outside and sports uses. 1950s sunglasses embodied the same shapes as glasses, but had darker tints and heavier frames. Plastic sunglasses were preferred over most metal frames. White plastic in particular dominated the market while other colors like red, pink, and green were also common.  At the end of the decade, some movie stars were seen wearing leopard print sunglasses. New plastic technologies made these and other patterns possible such as swirls, polka dots, plaid, and glitter. Sunglasses lenses also came in some new colors. Brown was standard and dark grey was an option favored by men, however the new exciting color was green. Green lenses in shades ranging from lime to olive dominated the mid-century market. Green with white frames was fresh and edgy. Green with brown or tortoiseshell frames were neutral and sporty. Green with black frames were very mod, although the lenses were usually lighter to keep them from looking too ominous. Very dark lenses were worn by and associated with Teddy Boys (and girls), rebels and troublemaking youth. Hollywood stars often wore dark lenses too, but that was to obscure them from the paparazzi. Sunglass frame shapes started off as a large rectangle with a slightly rounded bottom edge. The white frames were chunky around the eyes and sides. Some had very unusual “mod” shapes or extra wide sides.  By the middle of the decade, frames grew less dramatic and more “normal” shapes set in. Rounded squares, modest cat eye, modified aviators in white or natural hues were found in the market. The cat eye dominated the end of the decade with narrower shapes and bigger wings. Elongated frames, in general, were composed of ovals, triangles, and rhombus shapes set in colorful translucent frames. The thick frames and narrow shape gave them a futuristic look, perfect for transitioning into the space-age 60s. Ray-ban had a dedicated women’s eyewear range introduced in 1958, including frames in different colors with decorative flourishes that kept pace with contemporary fashion. The women’s line always had a flair for the dramatic while the men’s line preferred classic aviator styles.