Evening dresses for the upper classes were draped in beautiful fabrics. In 1912, most had upper arm sleeves and a wide scoop neck. Designs from 1909-1911 featured a V-neck or wrap top with a wide sash at the empire waist. Skirts hung down in columns, often with one or two sheer layers on top to create a soft tiered effect. Fabrics were chosen for their light and airy qualities (chiffon, silk, lace) and decorated with fine details (beading, embroidery, crochet, inset lace). Colors ranged from rich jewel tones (black, blue, red, gold) to soft pastels (baby pink, sky blue, lilac, yellow). 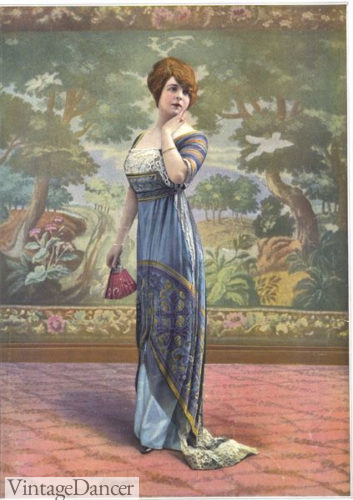 Besides being long, narrow, and expensively decorated, women’s clothing was heavily influenced by the Far East. Japan was a newly discovered world by Westerners. Men collected all things “Japanese” such as swords, while the ladies swooned over beautiful silk materials and clothing designs. The kimono influenced dress styles (most of Rose’s day dresses in the Titanic movie were kimono style). Even the hobble skirt was influenced by the Japanese Geisha, who walked in very small steps. The amount of ornamentation on gowns — like the extensive hand beading on dinner dresses — and the ornate jewelry that accompanied a first-class woman’s wardrobe was a sign of very wealthy times. The RMS Titanic herself was a showcase of extravagant spending, and with her sinking, such opulence ended. The coming War eventually sent the world into a much more conservative state, at least for a few years.

These extreme fashions were worn primarily by young women. The mature ladies didn’t fully embrace the new fashion. Instead, they wore fashions that resembled early Edwardian times: large puffed out blouses with puffy shoulders and narrow long sleeves, attached to a full-length A-line skirt with ruffles at the bottom. We are Debbie and Oscar, your guides to dressing up like decades past. We are here to help you find clothing online and learn about vintage fashions as worn by everyday people, just like you. Need help with your outfit? Ask us anytime.
« 1900s Men’s Hat Styles, Edwardian Era
Men’s Vintage Sweater Vest History 1910s, 1920s, 1930s, 1940s »