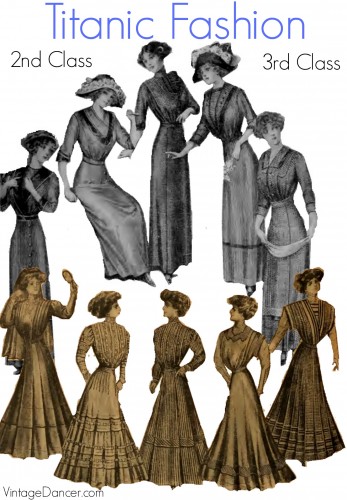 For all the attention first class Titanic fashion attracts, the reality is most passengers on board were not wealthy. The fashions for second and third class passengers were simple, modest, and affordable, yet not without influence from upper-class fashions of 1912. The Edwardian poor came in droves to sail across the ocean and start a new life in America. They carried only 1 or 2 outfits with them, all their possessions fitting in bags they could carry on board. Their clothing reflected their wealth or lack thereof, country of origin, age, and personal style. Summer clothing, middle class women. These styles are a few years old but still worn in 1912.

During the Edwardian period, changes in popular culture and the ways clothes were sold meant fashion was no longer reserved for the upper classes. Trends were beginning to be set by stage actresses, rather than just the wealthy, and media began taking an interest in fashion as well. Women’s magazines increased coverage on fashion in general, cheap postcards with images of popular actresses such as Camille Clifford and Maxine Elliot were easily accessible, and daily newspapers even began to invest in featuring articles on fashion. Department stores began to populate major cities, becoming an integral source of fashionable clothing, and retailers increasingly marketed themselves towards the middle class. Some went as far to have bargain basements for the lower classes to shop in.

These changes meant the lower classes could now emulate the upper class in dress — a trend that was met by some derision and criticism. Though second-class Titanic passengers were not necessarily at the forefront of fashion, they still remained fashionable. Even third-class passengers were relatively well-dressed, as a third-class Titanic ticket excluded the very poor. Only 285 people had middle class tickets.

710 people boarded the Titanic as third class passengers, the largest of the classes on the ship. Third class passengers were skilled tradesmen who had enough means to provide for a family and dress them appropriately. Most were immigrating to America to join other established family members. With them came many who wore traditional or ethnic clothing — usually brighter colors and bolder patterns.

Very little is known about third class passenger attire. Those whose bodies were recovered from the sea were documented with the clothing found on them. Remember though, the sinking was at 2 am, and most passengers of all classes were only in their night clothes and a warm coat. The only other records are of pictures taken before the sinking, often dressed in their Sunday best. We can only take an educated guess at what third class passengers really wore on that tragic crossing.

Where did they shop?

Main differences in clothing existed in the quality, quantity, and decoration of clothing. Many women still wore earlier styles that featured long, flaring A-line skirts and a tight bodice, as opposed to the new longer, straighter silhouette. Wider and shorter skirts were more practical for working classes anyways. Underclothes remained the same in all classes, however, with corsets always being worn (though sometimes shed by the young and daring) with chemises, drawers, and petticoats made in simple wool without decoration. The other difference between first and second or third class passengers was where they purchased clothing. The upper classes could afford to have custom made clothing from the top fashion houses in Paris. If shoppers were local or taking long vacations, women and men could be present for several fittings. The middle class could also have clothing made by a local seamstress or a talented neighbor who took on side work. Since all girls were taught how to sew in school, many could make their own clothing, taking inspiration from women’s magazines to create a pattern or buy a cheap paper pattern now being sold in most general stores, mail order catalogs, newspapers, and magazines. Increasingly, the newer market for ready to wear clothing targeting middle classes meant women did not need to spend time sewing one’s own clothing. It also meant, in big cities, they could shop like the upper classes at huge department stores and walk away with a new dress, coat, or shoes that very day! The quality of ready to wear garments sold in shops or through mail order catalogs was not custom. These garments were designed to fit loosely so as to accommodate a wide range of body shapes. The materials were cheaper blends of wool, cotton, and satin, with less fancy trim than the upper classes had. Women often had to alter clothing purchased ready made or add nicer trim onto plain clothing. These were reasonable concessions for a much cheaper garment than handmade items. The best sellers were separates, underwear, and outerwear since they required the least amount of tailoring to look good. The styles of clothing, too, were not in line with the high fashions from Paris. Typically, it took 6 months for the latest Paris designs to make their way into the hands of middle class seamstresses, fashion magazines, pattern makers, and ready to wear. Then it was another 6 months before the first copies of these designs appeared for sale in the appropriate season. Middle class fashions were always 1 to 3 years behind the latest styles.  They were also slower to die off. Many styles of clothing stayed in fashion for 10 years among the lower classes especially those that proved to be comfortable, easy to move in, warm, and cheap to make. High fashion was rarely practical enough for the Edwardian working class. For the 3rd class passenger, they could choose to chase high fashion and dress past their class level. One notorious 3rd class passenger wore a fine silk dress and fur coat and was assumed to be part of the first class once on board the rescue ship Carpethia! Most 3rd classes did not buy new clothing. Instead, there was a large market for used clothing (the first thrift stores?) as various classes tossed out their old clothes and they became stock for second hand shops, flea market vendors, charity bins, and traveling salesmen. This is how the majority of women purchased new-to-them clothing. Needless to say, these styles were 3 to 10 years behind the current fashion trends. Three middle class dress suits showing high, medium and low styles of trim. The lowest cost is $22.50 or about $500 today. A lower class wool knit sweater in grey and red

Trends in outerwear among the wealthy made their way down the social ladder, which made tailor-made suits a popular choice among the second and third class passengers. An entire suit, comprised of a wool skirt and jacket worn in combination with a blouse, was not affordable to some members of the middle and lower-class. This meant that some wore a wool skirt in combination with a cotton or wool flannel shirt and a knit jacket to complete the outfit. The mix and match styles offered greater outfit pairings from 2 or 3 basic sets.

For cost purposes, the tailor-made suits of the lower classes would be made of cheaper materials as well, popular fabrics being tweed, wool serge, or shoddy – a recycled fabric made of rags. Common colors were black, brown, and navy. The upper middle class may have had an all-white suit. By 1912, new colors emerged for all classes. Burgundy, deep purple, medium blue, and olive green brought an optimistic spirit to a generation of people who were tiring of the old ways built on a strict class system. Patterns were popular, too, for day looks. Narrow stripes, plaid, small, and large prints were seen on house dresses and some suits. The tight fitting hobble skirt was impractical for second and third class, but that did not mean they only wore older style A-line skirts. Suits had skirts with high waists with a slim fit, long suit jackets tailored over the slender skirt, and plenty of pleats and tucks to make walking easier. Women in the middle and lower-classes also wore simple, minimally decorated full-length wool or cotton dresses. These came in darker colors during the winter, keeping in fashion, and lighter colors for warmer days. Women of the second-class were obviously more able to keep up with the latest trends, and often wore garments that featured some fashionable elements, including high waists, asymmetrical detailing, slender skirts, and long, narrow jackets in the latest colors and trim. Shop Edwardian era day dresses.

Children after age 12 dressed like their mothers. Before that, they wore knee to mid-shin length dresses and long coats. Navy dresses with white trim were very popular girls’ play clothes, while white tea dresses were for dressy events if they could afford it. 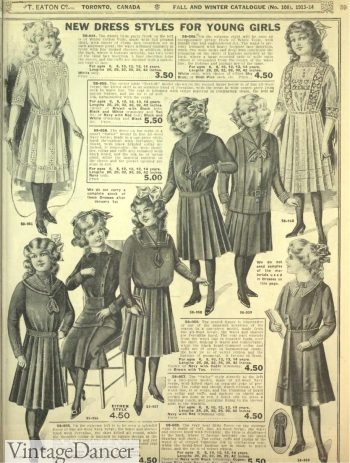 Coats were an important article of clothing to have for such a cold journey, and most women wore full-length, loose-fitting wool overcoats. These coats were in darker colors like their more expensive counterparts, though they didn’t have the fur. Third class women who were unable to afford a coat would wear large shawls instead, made of wool and brightly colored. These were no longer considered fashionable, but they were widely available and affordable. Hats were a way to make a woman’s outfit more up-to-date, and large, wide-brimmed styles made their way to the top of most women’s heads, regardless of the woman’s social standing. Those who were wealthier could afford more flamboyant hats, but a plain straw or felt hat could be later accessorized with ribbons, artificial flowers, veiling, feathers, or other trimmings. 1911 Hats styles for Mature Women. Still very large but not as wide. 1912 Ladies hats- smaller than 1910 styles but well decorated with flowers.

Smaller hats were more practical for the lower classes. Etiquette required women and men to wear hats while outdoors. Hats of 1912 had medium round crowns (they had to fit over BIG hairstyles), turned up brims, and as heavy decoration as your class could afford.

Trim was quite expensive, so as fashions changed trim was removed from one hat or garment and placed onto another. Even the upper classes removed trim from clothing before donating them to a servant or charity.

1912, Plain undercoated hats. Simple shapes with a little trim were all lower classes could afford. Leather boots were the most popularly worn shoe — narrow in the foot, ankle-length, high arches, and with laces up the front or buttons on the side, these were both stylish and practical. More fashionable shoes could be bought at department stores that were relatively affordable, but traditional cobblers offered a more practical shoe that women of the lower class opted for.

Mail order catalogs also offered a wide range of boots, walking Oxfords, and some heeled pumps targeting the middle and lower working classes. Yet again most shoes were purchased second hand by the lower classes.

Next up in this Titanic fashion series is a look at how to create Titanic era fashions for all classes.

We are Debbie and Oscar, your guides to dressing up like decades past. We are here to help you find clothing online and learn about vintage fashions as worn by everyday people, just like you. Need help with your outfit? Ask us anytime.
« Vintage Skirts & Retro Skirt Trends
Vintage Inspired Wedding Dresses: 1920s-1960s »