Edwardian era black fashion. See what African American (and some British) men and women from 1900s to 1910s, WWI and after. Featuring everyday clothing worn by middle and upper economic classes. 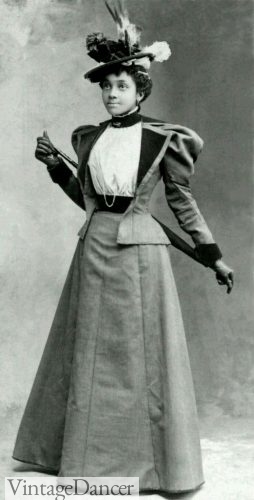 Photographer John Johnson, from Lincoln, Nebraska, took hundreds of photographs in the early 1900s of African Americans and immigrants in his community. 1919 Portrait of Mrs. Winfield and Friend 1919 Woman with Coat and Man in Suit and Hat

We are Debbie and Oscar, your guides to dressing up like decades past. We are here to help you find clothing online and learn about vintage fashions as worn by everyday people, just like you. Need help with your outfit? Ask us anytime.
« How to Date or Research Vintage Labels, Brands, and Designers
1920s Black Fashion, African American Clothing Photos »