Men’s hats during the 1920s ranged from season to season. Warm summers, such when The Great Gatsby took place, brought out straw Boaters, Panamas and Longhorns as well as linen flat caps. The cooler seasons kept men in conservative suits with Bowlers, Derbies and Fedoras being the best hat choices.

Unlike today, men and women always wore hats. Every day and every occasion called for a hat to match your outfit. Light were worn in the summer, and dark colors appeared for winter.

Let’s take a look at the different styles of 1920s summer hats first. The hat that the Great Gatsby wears most is the flat cap. More recently, the Peaky Blinders men wore tweed caps reflecting their urban status. Also known as Ivy caps, cab driver hats, newsboy caps, golf caps, driving caps, and Big Apple caps, this style is made of 8 triangle panels that meet at the top with a covered button made in the same material. It has a small brim that the top rests on. Overall, 1920s caps looked baggy, not like the tight narrow Ivy caps you see today. In the summer, these caps were made of a light colored linen or cotton poplin material and lined in silk for breath-ability. In cooler weather, the caps came in tweed, herringbone wool, and corduroy as well. Darker colors were worn in the winter– blues, greys and browns– in solid, plaid and check patterns.

All classes of men wore these hats, even boys selling newspapers on street corners, hence the newsboy hat name. It was mostly a working man’s hat from the same working class origins as the fisherman’s hat. It became a well-to-do men’s hat when worn with sporting clothes or upper class leisure clothing such as golf. For auto drivers it was ideal, since there was no stiff crown to bump into the car roof. It remained a sport hat for golf well beyond the 1920s. Straw hats were even more popular than flat caps for hot summer days. Outdoor sporting became the new hobby for men and women. From tennis to biking to riding in your new car– the people of the 1920s were outdoor enthusiasts.

Boating became popular, and with it the boater or skimmer straw hat was worn. Boaters were handwoven thick straw made into a heavy solid cylindrical hat with either a 2 inch or 3 inch brim. Skimmers had the smaller brims, while boaters had the larger ones. Other than that, their shape was the same. They each had a solid or striped Petersham ribbon around the base. College kids and alumni often wore their college’s colors on their hat bands. Many men’s “gentleman’s clubs” also produced bands with their club’s colors. Barbershop quartets are often associated with these hats. Popular in the 1910s and 1920s for summertime entertainment, they became the staple uniform hat for singing musicians. Another common straw hat for summer was the Panama, in particular, the Optimo Panama hat. It was hand-woven of very lightweight reed straw from South America, where it was woven and imported from Ecuador. It could be rolled up and tucked into a lapel pocket, which made it very easy to travel with. The rounded crown and rolled crease down the center of the hat defines the Optimo style.

Both men and women enjoyed this style of hat. The other Panama option was the South American Panama hat with a flat telescope crown that more closely resembled a lightweight boater or skimmer. Authentic Panama hats were quite expensive, so only the elite could afford one. 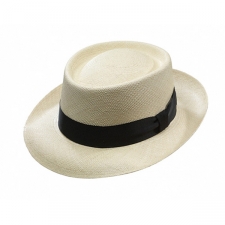 Other styles of straw hats existed in the 1920s. While the shape doesn’t have a name, they generally resembled their felt hat cousins, such as the fedora. From “Straw Hat Day” in May or June to “Felt Hat Day” on September 15th, only straw hats were to be worn, regardless of weather. It was a tradition that caused annual riots of hat smashing.

TIP: Don’t go over budget on a Panama hat. The non-packable varieties need careful consideration to make sure the straw does not get bent. Once damaged, it’s not reversible. Trust me, I’ve learned the hard way. A few decades before the 20th century, a man developed an oval shaped hat in a hard material for riding. The edges were curled all around and finished with matching petersham ribbon.  It was designed to protect a man’s head while riding through bushes and ducking under branches, and became a popular hat even among men without horses. Although materials softened a bit from the 1900s hard hats, the Bowler (also known as a Derby) was the most common men’s hat of the early 1920s. It was an appropriate alternative to the formal silk top hat. Black was the most popular choice, although stylish men also had brown, tan, or grey bowlers to match their suits. Towards the end of the 1920s, when men and women’s fashions became bolder with color, bowler hats appeared in blues, greens, and other more festive choices.

In the summer months, a bowler could be made of straw although these were less common. Usually, they were made of light weight, light colored felted wool. A cousin of the bowler is the Homburg. Worn in the decade preceding the ’20s, the Homburg looked like a bowler with a long crease down the middle. They were also considered somewhat of a formal gentleman’s hat. Black, brown and grey were again the primary colors.  Ribbon bands were quite wide, as they generally were on Fedoras and other soft felt hats, too. The crown was tall and straight on the sides.

The Homburg quickly went out of fashion in favor of the soft creased Fedora by the mid 1920s. 1924 – looking well in Homburg hats, these were the detectives who caught the Bobbed-Hair Bandit Previously, the fedora was a women’s hat style that began in the 1880s. In the 1920s, the fedora hat was only just entering the fashionable scene for men. 1920s men’s fedoras featured wide 3-inch brims that were shaped downward on both the front and back side, thus making the sides roll slightly upwards. This shape was popular with young men who called it the snap brim or swagger hat. Otherwise, brims were turned up on one side and down on the other, a style preferred by more traditional men.

Hats in the 1920s came uncreased when purchased, so that the owner could decide how to shape it. Fedoras, however, had a sharp crease down the middle that could be either a single crease or a triangle shape with the base of the triangle at the back of the hat. Hat colors often matched suits, but it wasn’t a universal rule. Popular colors were olive green, black, brown, and gray. A solid color band made of petersham or silk with a flat bow wrapped around the base of the hat. This band usually matched the color of the hat, but could be in a contrasting color, like white on black, for extra style. A feather on the side of the hat did appear on some hats, but wasn’t very popular till the 1940s. While the felt fedora started out as a middle class hat, wealthy men associated with prohibition and crime, like Al Capone and his gangsters, became icons for these hats in the 1920s. The Trilby is another name for what was essentially the same hat as a fedora. Trilbys featured tall crowns with a crease down the center, rolled up side brims, and a wide Petersham band with flat bow on one side. Common colors were black or brown with a matching band. In the 1920s, hats were almost always made of beaver fur felt.

Other fur felt hats came in a variety of tall crowns with and without creases, indents and wide brims. Some were crushable, and some were hard to protect heads for labor jobs. They lacked specific names. We can see some other types of men’s hats in the catalogs below. The Columbia hat was similar to a Homburg, sometimes without the center dent. The Congress style was an extra wide brim Homburg hat. The Carlsbad was a very tall and wide felt hat with one or two dents up the front. There were also workmen’s hats, caps, and sport caps made of fur or corduroy. The mid height beaver fur or silk top hat with a curled brim was still the best hat for formal wear in the 1920s. It had been popular for a century and remained the hat for formal wear for another 50 years or more. It was an everyday hat until the 1920s encouraged informality and soft hats in all matters of dress. While many traditional upper class gentlemen still wore them in business settings and especially democratic political gatherings, the younger generation saw them as a “vicious, vile, and ugly symbol of the ungodly Victorian” as written by Westminster Abbey’s Canon Donaldson in 1927.

For most men, donning a silk hat was something only done at weddings and grand opera performances, where men in cheaper seats found it more useful to have a collapsible silk top hat that they could tuck under their seats. If you are lucky enough to find a 1920s hat in good condition, then you are in for a real treat. Most felt and straw hats were well worn by the end of a season, if not completely destroyed by the elements and frequent handling. There are quite a few choices in new men’s hats that still embody the 1920s style.

We are Debbie and Oscar, your guides to dressing up like decades past. We are here to help you find clothing online and learn about vintage fashions as worn by everyday people, just like you. Need help with your outfit? Ask us anytime.
« 1930s Men’s Shoe Styles, Art Deco Era Footwear
Vintage Dance Shoes- Where to Buy Them »