“On the rim of a skyscraper’s forehead
I looked down and saw: hats: fifty thousands hats
Swarming with noise of bees and sheep, cattle and waterfalls,
Stopping with silence of sea grass, a silence of prairie corn
Hats, tell me your high hopes. “ 1920s men’s hats. For much of the twentieth century, a man’s hat was his identity. He bought it, shaped it, creased it, handled it, and placed it on his head just right. A hat had as much personality as its owner. His hat stayed with him at all times, or else was lost or stolen off a public hat rack. His hat caused him to pay out more tips to hat check girls then it was worth, and could cause bodily harm if the wrong hat was worn on the wrong day. To wear a hat was often more trouble then they were worth for the sake being in fashion. While the 1920s saw a decline in hat use, it was still considered a necessary part of a man’s wardrobe by the popular majority.

This article’s focus is not on the styles of men’s hats but on the fascinating cultural history of men who wear hats (and what to do with them when they are not). I have the book Hatless Jack by Neil Steinberg to thank for the in-depth look at the history of men in hats.

A man and his hat were inseparable. From the moment he put it on at home to the time he took it off for the night, his hat was always with him. If a gust of wind happened to remove his hat form his head, he could chase it down the street, but that would be even more embarrassing then going home empty headed. The thing about hats is that they were a construct of social etiquette more than necessity. How a man treated his hat had more impact on his character and public perception than which hat he wore. To doff a hat was a slight lifting of the hat off of the forehead out of respect to a lady, an important person, or as an American flag passed by. “How could you doff your hat to a lady if you didn’t wear one” was a common theme in hat advertisements. Emily Post guide to Etiquette in 1922 dedicated four pages to when to wear or remove your hat. It’s worth reading yourself but here is the summary.

Wear a Hat when…

Take off a Hat when…

Emily Post’s guide to hat etiquette is what many well mannered gentlemen tried to follow, but hardly what they actually did. A man stood out if he took his hat off in an elevator and  looked strange if he wore one inside his own house. Personal hat etiquette had more to do with upbringing than social law.

What to Do with Your Hat in Public

Where do men put their hat after they take it off? Since etiquette states that he must remove his hat inside, there must be protocol for where to put it. In a home or business office, a servant or host would take his hat and coat and place them on a designated hat rack or table. That was easy. Going out to a cafe or restaurant, a man could place his hat on his lap, his bent knee, dangling from a foot, on the back of the chair, or on a empty seat at his (or a nearby) table with other men’s hats and coats.

Public restaurants often had public hat stands and tables, but to leave your hat there made it all to easy for it to be stolen or crushed. Hats were usually expensive and looked alike, making them easy to steal and easy for a thief to claim “mistaken identity” with his own hat. The great hat mix up was common fodder for comedians. Whenever possible, it was best for a man to keep his hat on his person at all times. In 1904 a young man, A . J. Liebling,  noticed the reduced restaurant seating capacity when men’s hats and coat took up a seat of their own. He approached the restaurant owner with an idea of a “hat check” room. Paid by tips, the hat check roomed proved fruitful to hat checkers and restaurant owners who charged rent for the privilege of checking their patrons’ hats. Tips were at first optional, but then became socially required. A stiffed tip meant a man’s hat could could be returned dirty or lost. Americans after the war were uneasy about tipping another man for a task he could do himself. They were not, however, uneasy about tipping a young lady.

Hat check girls soon replaced hat check boys. These ladies, not always beauties, had the ability to charm regular clients, remembered names (or learned new ones from his name stitched into his coat). If you underpaid your tip, she would greet you with the saddest face you could never forget. Guilt worked every time. Unfortunately, most tips went to the hat check stand owner and not to the hat check girls.

“Take your hat sir” became a phrase gentlemen heard several times a day from the barbershop, lunch, business drinks, dinner, and the theater each costing a dime apiece. For the businessman who ate out frequently, tipping on a $3 hat could cost $10 every four to six months. This soured some men into not wearing hats, although they continued to check their coats. As costly as hat checking was, it became the ultimate shame for a man to lose his hat to the coat room. Every year, the changing of the seasons marked the changing of a man’s hat from felt to straw and back again.  September 15 marked the official change from straw to felt hats regardless of if it was still summer weather. In Spring, “Straw Hat Day” was chosen by the local city mayor occurring sometime in May or June. The hat industry pushed public campaigns to move the date earlier and earlier in hopes of flooding men into haberdasheries to buy their panama, boater and longhorn straw hats earlier. A longer summer hat season also meant a push for a second straw hat buying sale in mid summer. Straw hats did not last as long as felt and needed frequent replacement. Going into fall meant a time to toss your straw hat out the window (literally) and dawn a new felt hat by September 15th. It was National Felt Hat Day, but most reports just called it September 15th day. Unlike its spring counterpart, it was not a happy day. “The fifteenth falls on a Tuesday next and after that mystic notch in the calendar has been passed men may continue to wear straw hats at their peril,” New York Times, 1925.

Yes, it was quite dangerous to your hat and body to wear a straw hat after the 15th. A young boy, gang leader, or even your teenage son, would take it upon himself to grab your hat, punch the crown out, and hang it from a street pole for all to be warned. 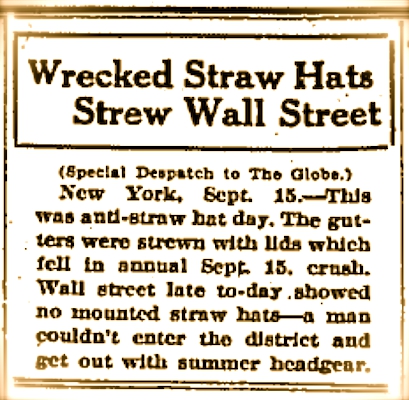 These boys cared less for social customs as they enjoyed the game of terrorizing and destruction. They often banded around haberdasheries, causing the New York Times to question who was really behind these gangs – kids or hat store owners? Hat stores certainly benefited from thousands of scared men who came to buy their new felt hats right away. The riots continued in New York and other cities around the country. The New York Stock Exchange had a tradition of smashing each other’s straw hats on September 15th, leaving thousands of crumbled hats on the stock exchange floor. Baseball, polo, and other spectator sports also used an opening or closing season game to trash their hats in celebration of a win or anger for a loss. Thin straw “throw-a-way” hats were perfect for these moments. This is probably why few cheap vintage hats survive to this day, but thick Boater straw hats are plentiful. Hatlessness became trendy, especially among young men in the mid-1920s. Hatlessness actually started around 1909, and by 1929 fur felt hat sales had dropped 42%. Men chose to wear hats less often, buy fewer, and when on trend go completely without.

After the war, hats seemed to symbolize conformity and old school values. Hats were unnecessary and only worn because social customs said so. The young college man tossed hats out in favor of a comfortable and manly appearance. He may also have been influenced by anti-hat campaigns that claimed wearing hats made a man bald. The hatless fad was also due in large part to the suntan — a warm youthful “just returned from vacation by the beach” glow that ironically used to identify the working class, and now identified the upper classes. A man was more of a man if he embraced nature and its elements. Going hatless in winter was even more of a sign of his rugged good looks.

Read more about the various styles of straw and felt hats in the 1920s here. 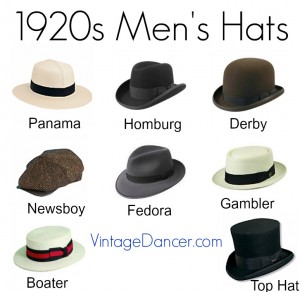 We are Debbie and Oscar, your guides to dressing up like decades past. We are here to help you find clothing online and learn about vintage fashions as worn by everyday people, just like you. Need help with your outfit? Ask us anytime.
« Fall 2013 Vintage Fashion Trends- Circle Skirts, Cardigans, Boots
History of Wonder Woman- A 1940s Rosie »