Not every occasion in the 1920s required women to wear dresses. Separates (a skirt and blouse) had been popular for a few decades before the ’20s. Blouses, then called “waists” or “over-blouses,” were a comfortable and fashionable option for casual daywear. They were also an economical one, as a blouse could be mixed and matched with different bottoms to create several outfits from only a few items. Like dresses, the popular low waistline appeared on blouses, too, which were often worn loose and untucked to straighten women’s natural curves. 1920s blouses were beautifully decorated in the first half of the decade, but turned to men’s shirt styles for sportier looks in the later years. 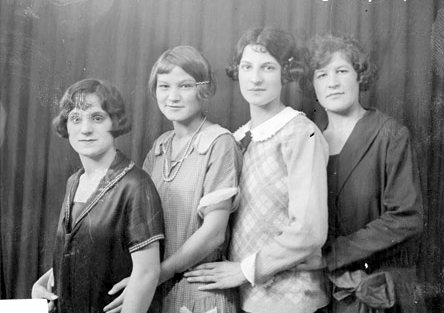 1924 Women’s Blouses- Middy Blouse on the Left, Peter Pan collars in the center, pointed collar on the right.

The most fashionable years for women’s blouses occurred in the first part of the decade. Prior to 1920, most blouses were white with insets of lace, panels of eyelet, embroidered shawl collars, long-ish sleeves, and an overall loose fit. They were very sheer and needed to be layered over white lingerie with a square neck chemise, corset cover, or combination suit.  After 1918, blouses explored new pastel and jewel-colored hues and became heavily decorated in the bodice, cuffs, and collars. Pretty sheer blouses with embroidery and button up front. A slip or step in was worn underneath. Round and V necklines without collars for the slip over style of blouse.

These lightweight, long-sleeved blouses of the early ’20s featured a wide variety of collars, sleeves, and waistbands. Until 1922, most blouses were worn tucked into the skirt but pulled out a few inches for the bloused effect. The untucked tunic model with a sash-tied waist or banded bottom hem became the thing to wear shortly thereafter. Some blouses were designed to be untucked, with small ties at the sides. Collar designs varied greatly around 1922 and onward. Most blouses either had a round Peter Pan collar, tuxedo collar, shawl collar, or a convertible collar. Collars were typically oversized and either heavily trimmed or very plain.

1922 Convertible collar worn open. These could also be buttoned up the neck. The crisp cotton broadcloth blouse was a staple of many wardrobes as a no-frills, serviceable house blouse. Other fabrics for dressier blouses included voile, silk, and linen for the summer and flannel, velveteen, and taffeta for winter.  Patterns were rare, though Chinese lettering, Persian paisley, and other Ethnic prints were popular in 1924. Dressy blouses were heavily decorated with embroidery, cording, lace, pintucks, fagoting, and light beading. Lace collars and trim added to both the femininity and the visual interest. Inspiration for the designs on blouses came from global sources: ethnic prints, Egyptian artifacts, Puerto Rican peasant dresses, and the Far East. There was more variety in fabrics too: silk, batiste, voile, linen, cotton, flannel, taffeta, georgette, brocade, velveteen and dimity all made an appearance. Most 1920s blouses were still very lightweight and sheer in summer, with slightly thicker fabrics appearing in winter. Blouses in the 1920s had long sleeves that went down to the wrist or 3/4 (elbow-length) sleeves. They were finished with cuffs or an open “bell” shape.  Short sleeve summer shirts, called pixie blouses, were made of cotton, broderie anglaise, or crochet, and they typically had a scooped neckline with an opening at the back. Short sleeves hovered from just above the elbow to mid-arm for sportier types. Around 1923-24, a new style of the blouse became briefly popular. We might describe it as a wrap blouse today, but in the 1920s it was called a Jacquette. Somewhere between a jacket and blouse, it was either worn on its own with a skirt or layered over a dress. It wrapped across the hip and attached to one side, sometimes with a bow sash. Blouses were worn with separate skirts. Mixing colorful blouses and skirts was more common in the early to mid-1920s. In the later years, dressy blouses lost their favor for a few years as most fashion turned to the one-piece dress, but they returned again in the late 1920s when a softer, feminine, look replaced the boyish figure of the 1920s.

With so many other rules being tossed aside, there was no time like the Roaring Twenties to dig into the man’s closet and see what could be adapted for women.  The mid-’20s saw the delicate details of the early years disappear in favor of the man-inspired button-up shirt blouse.  Ruffles, pintucks, long plaquettes, and buttons down the center created vertical lines.  Button up blouses usually had soft pointed collars and a modest V neck opening with 6 to 8 buttons down the front. Some hung straight down, while others had a wide waistband that circled around the hips. The band often fasted with buttons on one side. The men’s button-down shirt was tailored for a woman’s body with a narrower fit in the torso and arms. They had a men’s-style pointed collar and wide cuffs, but designers put in deeper V necks, round collars, bloused sleeves, and small pockets to make them more feminine. Typically, these shirts were even worn with a skinny necktie. Some young women chose to wear men’s or boys’ shirts instead of the more feminine blouses. 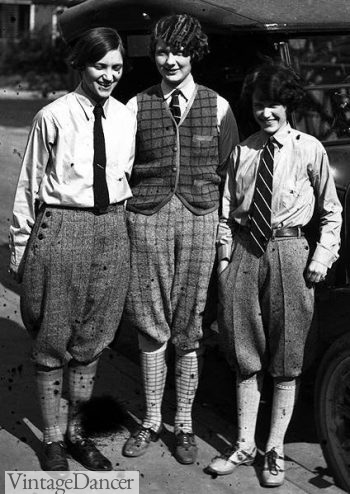 The addition of a tie around the collar was nothing new to the 1920s. You can see that many blouses (and dresses) featured thin, long bowties dangling from the neck. Some were small and dainty, while others were large and scarf-like. Some would call these “pussy-bow” blouses today.

1926 Neckties on blouses. These were common throughout the 1920s.

The shirt-blouse could be a pullover style as well, some with large round collars or scoop necks like the earlier years. Blouse colors favored white, neutral tans, peach, blue, and black in English broadcloth cotton. Silk or Rayon blouses with a moderate shine were favored over sheer fabrics for the dressier models. The vest-blouse combined the men’s style suit vest into a wearable women’s blouse. It had long sleeves, a single or double row of buttons, a notched collar, and pointed tips at the hem. They could be worn with skirts, but more often were paired with riding breeches and plus fours. This style would pave the way for the Blazer jacket to come into vogue by 1929. The midshipman’s white and navy top led to the creation of the “middy,” which was really just a sailor’s shirt with a feminine touch.  These sailor-inspired blouses were popular before the 1920s and lasted well into the decade. They were especially popular with summer sports such as tennis, golf, and badminton, as well as with team sports deemed appropriate for women, like bowling. Girl’s gym shirts and many women’s professional jobs (for example, gas station attendants) used the white middy top and tie because of its uniform look. Middy tops could be navy blue, red, grey, or white a contrasting collar and/or stripes. Cotton, silk, denim, and linen were used in summer while wool serge and flannel were used in winter. A sailor neck scarf or thin string tie tied at the base of the collar. Nautical emblems, service stripes, and braided trim added even more military style. Most middy shirts were worn with pleated skirts in a contrast color or pattern to the blouse. The all-white blouse and skirt set belonged to tennis players and also served as uniforms for some. The smock top was another sporty shirt offered as an alternative to the Middy in the very early years. It was like a long tunic, with a contrasting belt with optional large pockets convenient for holding golf balls, tees, birdies,  and a hanky. Oh, how I would love for ’20s style blouses to come back in fashion, but the amount of hand embroidery that went into each tunic shirt would make them extremely expensive if remade today. While it is unlikely we can find fully embroidered blouses, we do have some other options that will give us the right look. Shop here for new 1920s style blouses.

Peasant Blouses – These are in fashion again. The style tends to lean towards the peasant tops of the 1960s and 1970s with a drawstring tied neck and elastic waistband. If you find a good sheer peasant top with a slit and necktie, simply remove the tie and sew up the slit and – presto! back to the 1920s.

Collared blouses – Blouses with pin tucks or lace insets are very teens/1920s. I look for round collars and ties at the neck. The best blouses button at the back, but front buttoning are good too.

Sailor Tops – Sailor blouses remained popular until the late 1950s, so they’re still easily found among retro or vintage style clothing. Sailor neckties over white blouses are also in style in the mainstream fashion world. Pretty much any sleeved sailor inspired top will work for a ’20s middy look.

Evening Blouses – With heavy beading and sequins they’re not quite period correct, but lightly beaded tunic tops are ok.

We are Debbie and Oscar, your guides to dressing up like decades past. We are here to help you find clothing online and learn about vintage fashions as worn by everyday people, just like you. Need help with your outfit? Ask us anytime.
« Make a 1920s Dress Costume for $25 or Less
1920s Skirt History »