Just like 1920s blouses, skirts during the twenties went from the vogue thing to wear in the early years to out of fashion by mid-decade.  Women wore skirt and blouse separates around the house and while visiting friends, traveling, playing sports, and running into town in casual, comfortable attire. In most cases, they were not formal enough for afternoon and evening wear. Some early skirts made of silk taffeta were the exception when paired with an elegantly embellished blouse.

Most 1920s skirts were part of the “sporty” look aesthetic.  Skirts played a big role in many sports uniforms, from golf to tennis, field hockey, and bowling. For the everyday woman, the sporty skirt paired with a blouse and sweater was her way of dressing for leisure. Skirts of the late teens and early twenties were in the shape of the hobble skirt, although not quite so restrictive. In 1920, skirt lengths went to the ankle with a slight bow around the hips and slight tapering to the hemline. Wool in brown, navy blue or black solid colors as well as brown/tan, blue/brown, and black/white plaid skirts were in every woman’s wardrobe. 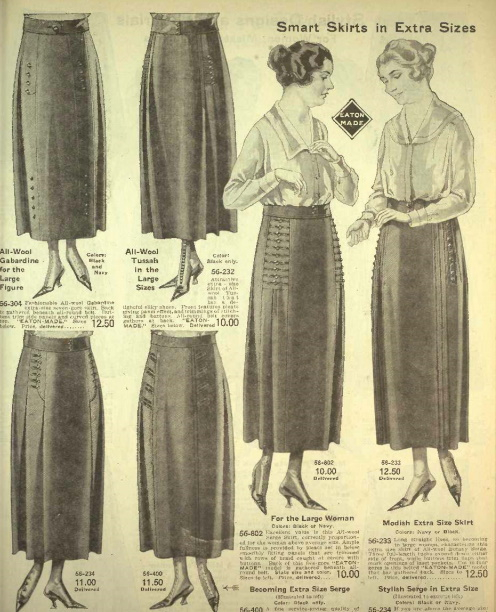 In 1922, skirts came off the ankle and up to mid-shin (the first midi skirt?) and flared out, creating a slightly A-line shape, or they tapered around the hip in a barrel-like shape. There was plenty of room for comfortable walking, climbing stairs, or traveling by bus. Waistbands were wide and patch pockets were large. Skirts fastened with hooks on the side. Buttons on the outside were often decorative and non-functioning. In summer, the white, cream, tan, or light grey skirt was the essential skirt made of light wool, gabardine or linen. They were paired with white blouses, middy blouses, long knit vests, and light jackets. Most blouses were worn tucked into the skirt’s waistband and pulled out a few inches. By 1924, skirts fell back to the ankle and lost any shaping they had. Rectangle wrap-over skirts or knife-pleated column skirts were in style. Many women continued to hem their skirts to a higher, more comfortable walking length. Colors remained dull with the occasional bright hue such as apple green, powder blue, or purple. To achieve the column shape without a bulky waistband, skirts were being attached to a sleeveless white camisole top.  This made skirts hang straight around the hips – no waistband or belt needed. Over the camisole would be the separate blouse, which now came with a built-in waistband that hung around the hip. Tucking in a blouse was impossible with the all-in-one camisole skirt.  Skirt separates continued to be offered with a button to the front or side with a narrow waistband. The jumper dress or suspender skirt was one of the hybrid designs that became trendy between 1922 and 1927, although it never truly went away. They were usually a little girl’s style of dress, but being all about youthful looks, the 1920s adapted them for young women too. While the width of the suspenders and depth of the neckline varied over the decade, it was a unique skirt style.

1922 house dress in the jumper style (looks like an apron)

Around 1926 and 1927, the two-piece dresses replaced mix and match skirt and blouse separates. The two-piece dress sold as a matching set of top and bottom (chemise and skirt).  The top and bottom were often in different colors but trimmed in the same fabric as the skirt such as on the collar or skirt band. The overblouse had a defined hip waistband that met the pleated skirt.

Pleats could be fine crinkle pleats, accordion pleats or wide box pleats. Pleated skirts dominated 1920s fashion for most of the decade. The swinging movement called attention to a woman’s visible legs. The pleats also allowed ample walking room without disrupting the column-like shape when standing. While many two-piece dresses were made of the same type of materials as one-piece dresses (crepe, silk, rayon) there was a new kid on the block making huge fashion waves — knits.

Knit two-piece dresses were designed for sportswear but were hardly ever played in. Instead, they became “sporty” daywear looks. Pairing a solid knit skirt with a cubist or geometric pullover sweater top, the two-piece knit dress was born. Jersey was an acceptable and more comfortable fabric for these looks year-round, while the knitted yarn was better for winter. Knit skirts were usually straight and knee-length. However, some featured gored pleats or box pleats on the lower half of the skirt. The tops were long sleeve sweaters or short cap sleeve tunics in summer. The mixing of patterns became trendy around 1928, such as the striped top and geo shell print skirt above.  Knit tops were mixed with fabric skirts as well. In 1928-9, the mixing of blouse separates was starting to return to fashion. The white button-down shirt blouse or colored pullover blouse was worn over a separate skirt with a thin belt. It was a simple but sporty combination.  The outfit was sometimes called the “Tom Boy” look because the blouses looked more like men’s dress shirts than the soft and feminine blouses of the early twenties. Add to it a blazer type jacket (also menswear-inspired) and women were now dressing in the latest gender-bending casual style. By 1929-1930, fashions were changing. The skirts on dresses now featured unique shapes, draping, tiers, flutters, asymmetrical and hanky hemlines. Skirt separates, however, did not adopt these shapes. We get a glimpse of 1930s fashion in these two fall-winter 1929 illustrations showing the new yoke top skirt in longer lengths, with a slim fitting tucked in blouse and extra-long jacket (or short bolero jacket.) Early ’20s style midi skirts in wool can still be found in thrift stores. Plaid wool midi skirts had a revival in the 1990s, which is what I usually can find. Sometimes I add big buttons or faux pockets to give them a tad more ’20s personality. For fancy occasions, I might add some Art Deco inspired designs with ribbon, but overall skirts were plain in the 1920s and don’t need much decoration. Easier to find right now is the pleated midi skirt. Made of chiffon or other sheer material, they swish and sway in a very ’20s way. Pleated knit skirts are also great, but harder to find. The geo print skirt, which is a 70s look, can also double as a 1920s Art Deco or Cubist-inspired outfit. Reader Alissa put together this skirt and sweater set for a Gatsby party. Skirt is from Amazon.

Skirts with tiers or layers and a hanky or asymmetrical hem can also be authentic looking when paired with a matching top for an all-in-one dress look.

Skirts should hang straight, not tight like a pencil skirt or too gathered at the waist which adds volume. They should also never rise above the knee (no visible knee caps.)

For a flapper costume, choose a shorter skirt with fringe along the bottom or all-over beading. All sequin skirts look a bit too ’70s disco.

We are Debbie and Oscar, your guides to dressing up like decades past. We are here to help you find clothing online and learn about vintage fashions as worn by everyday people, just like you. Need help with your outfit? Ask us anytime.
« 1920s Blouses & Shirts History
1920s Men’s Shirts and Collars History »