The 1920s was the decade of the men’s necktie as we know it today. For several decades, the preferred neckwear was the bow tie, preceded by the cravat and ascot for more formality. The bow tie was still worn in the 1920s in loud vibrant colors, just like the necktie. They were especially enjoyed in summer with lighter colors of suits, or year round with conservative men. They had the same popularity in the late 1920s and 1930s in polka dot, small geometric and striped prints. The necktie, also called a neck scarf, became the most common men’s neckwear in the 1920s. Early in the 1920s, men’s ties were subject to poor construction and heavy use. They were a simple cut of 2-inch wide cloth backed with a heavier flannel material. The constant knotting, tying and pulling made them crease and wrinkle badly, as well as shortening their lifespan. Then in 1924, along came Jesse Langsdorf, a New Yorker, who redesigned tie construction into what it is today. Instead of one strip of fabric cut straight on the grain, he cut three pieces on a 45 degree diagonal, sewed them together, and then folded the outer edges inwards to make the triangle point of the tie.  It meant that the necktie retained its shape and did not wrinkle or wear out quickly. Jesse patented his process in 1924, but later sold the rights to other manufacturers. 1927 neckties and bow ties in stripes and patterns Neckties were usually a long rectangle piece of fabric that had pointed V ends. Some had straight ends. The width of the tie changed over the decade from narrow 2 inches to a wider 3- 3.5 inches. In the early years, scarf ties were very thinly knotted but flared out to create a wide point. Since ties were worn under three piece suits with the vest rising high to mid-sternum, the necktie was short and mostly unseen. They came to point around the bottom of the ribs. If a vest wasn’t worn, a longer tie could have been worn, but usually not. It was a faux pas to show your tie points in public. This was most often done by the working classes who could not afford a three piece suit, nor cared for fashion etiquette. The silk tie, just like today, was the most popular for the elite classes. At any given year, the vogue fabric could change from linen, to satin, to wool/silk and back to all silk again. The only exception to a fabric necktie was the knit necktie. Mostly worn by working classes or poor college students after the stock market crash, the knit tie was long and skinny with a square edge. It came in solid colors as well as wide horizontal stripes, polka dots, and narrow stripes too. Whatever the silk tie looked like, the knit tie tried to copy it. These were usually hand knit ties made by family and friends.

Just like most menswear in the twenties, neckties were loudly colorful. One fashion surveyor for Menswear Magazine commented “the bright-yes, verily, vivid-cravats adorning the necks of those sons of ragtime are so dazzling that even the rainbow is paled into insignificance.” Bright colors of blue, grey, maroon, silver and gold were popular as solid colors ties for a few years, but the biggest trend was for stripes. The wide striped Club tie or British Regimental tie was striped from high left to right. The two color tie was first worn by officers and men who belong to gentlemen clubs. The colors matched their club’s official colors.  In America, the stripes changed from high right to low left. There are rumors as to the reason for this, but the simplest explanation is that British tailors cut with the fabric facing up while American’s cut the face fabric facing down, resulting in opposite stripe placement.

Wearing a club tie meant you belonged somewhere, a feeling that was missing after the war when men returned to a bitter and unwelcoming community. Club ties sporting no particular color combination made it possible for every man to look like he belonged somewhere. Pink and navy, green and purple, red and yellow – all colors were possible. Another British tie to come to America was the Macclesfield, which was a silk tie with a small repeating design of circles, square, triangles, ovals, etc.  They were the best tie for well dressed men in the 1920s who could afford one imported to America. The polka dot tie also falls under this category, with the dark blue or light blue tie and white dots being the trendiest pattern. The Macclesfield tie was high style for the elite in the late 1920s. The name comes from the English town of Macclesfield in Cheshire, NW England. This tie pattern has never left in the history of the 20th century. Even today you can find Macclesfield print ties in modern wardrobes.

Besides stripe and print ties, one small trend in neckwear came from cubist artists. Art Deco colors and designs were hand painted on women’s dresses and scarves. Designer Jean Patou used the same colors and patterns on men’s ties. Ladies loved them, buying them for their gentlemen beaus.  Stylish young men, like Jay in The Great Gatsby, were fond of these bold colors and “new” forms of art.

Just like bold shirts, neckties came in a myriad of bright stripes, plaids and paisley prints. Paisley prints were especially common in the early 1920s. The image below shows the ties worn in Boardwalk Empire’s first season set in 1920. Neckties often clashed against the also brightly colored shirts. The more clashing the colors, the more stylish a young man was. 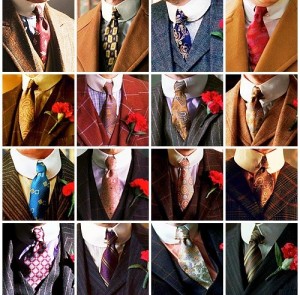 1920 Ties as seen in Boardwalk Empire

The Four in Hand knot tie was the most common and versatile knot for all types of 1920s ties. It created a thin and tight knot at the neck which fit all traditional club and point collars.

How to tie a Four in Hand knot

The Windsor knot was the trendy tie knot to wear. The prince of Wales set the fashion trend, although its unclear if he really invented it. Its bulky knot is caused by thick lining behind the silk. Worn best with wide spread collars to give the knot room. How to Tie a Windsor Knot Picking out a 1920s style tie or bowtie isn’t too difficult. You can still find many wide striped ties, Macclesfield print ties, and even knit ties. For the early ’20s, a paisley tie with lots of gold or silver print on a black or brown background will be a good choice. The club striped necktie or bow tie is good for the early to mid 1920s. The wild color cubist ties are fun for the mid-twenties. And finally, the polka dot ties can come out for the late 1920s.

No need to buy vintage ties, although they are very nice to have (Shop or sell on this Facebook group for vintage ties). New silk ties will work just as well for your 1920s look. Just remember to tie them short and in a Four in Hand or Windsor knot. Shop 1920s style men’s ties I selected for some great choices in ’20s pattern ties and bowties from my reputable online retailers:

We are Debbie and Oscar, your guides to dressing up like decades past. We are here to help you find clothing online and learn about vintage fashions as worn by everyday people, just like you. Need help with your outfit? Ask us anytime.
« 1920s Men’s Shirts and Collars History
1920s Men’s Sweaters, Pullovers, Cardigans »