1930s purses, handbags, and evening bags were essential fashion accessories for women. Practical in purpose and unique in design, they were plainly embellished but novel in shape and sculpture. Designing on a dime was the way of the 1930s, and women’s bags reflected these constraints during the day while casting them off in the evening.

In order to trace a history of popular handbags and purses of the 1930s, we must first examine the previous decades. During the twentieth century, women’s bags and purses evolved from tiny styles worn in the home to the practical sturdy styles we are familiar with today. Many popular types of handbags at the beginning of the 1900s were designed purely to be worn indoors or, in the case of much larger bags, for traveling (luggage). These included the Chatelaine bag, which would be attached to the wearer’s belt to contain perhaps keys or embroidery. The Reticule was a small pouch bag, fastened closed with a drawstring. The rather quaintly named Dorothy bag was similar to the Reticule, and would be decorated and embellished for evening attire. m1920s Metal Mesh BagThe 1920s saw bags becoming common place accessories whenever a woman ventured outside the home. By the 1920s, department stores had been around for a number of decades. However, as women gained greater social independence and mobility, it allowed for the act of shopping to become a social activity in itself. Hand tooled leather purses with small strap handles carried a little cash, handkerchief, mirror, and maybe some makeup. Her new independence was carried with her, a symbol of freedom as a modern woman.

1930s evening bags carried the same necessities but were elaborately beaded, embroidered, or woven in metal mesh to match the richness of evening gowns. These styles continued to be popular in the 1930s as well. Read more about purses in the 1920s. 1930s Small clutch and strap purses made to coordinate with the wearers attire.

The simple envelope bags or pochettees, later called clutches, were introduced in the 1920s but are mostly associated with the 1930s.  These rectangular or geometric shaped frame bags were plain and undecorated. The beauty was in the materials or the shaping that mimicked the smooth and polished style of the Art Deco movement.

Purses during the decade were needed to carry more items than before, specifically several beauty products, cigarettes and small coins. 1930s handbags were designed with multiple hidden compartments, built in cosmetic holders and sometimes watches. Adding a monogram drifted in and out of fashion during the 1930s. At first it was about displaying the owner’s initials. Later initials were used to brand certain designers. In both respects, purses demonstrated a woman’s identity.

The two bags on the right feature monogram letters in silver and gold. 1930s sewing pattern for accessories including a finger strap bag

By 1933, magnetic clasps were used to close up metal frames. Zippers also made purses easy to open and less bulky, removing the need for a flap. Zipper handbags were sleek, modern, and functional — all characteristics of a fashionable woman.  They were, however, not inexpensive.  Handmade handbags made of crocheted yarn, wood beads, sewn fabrics, and woven string or straw were economical solutions for the budget conscience. Here we see a selection of bags that can be made to match various accessories. Popular manufactured materials for daytime 1930s handbags included leather and various animal skins, such as reptile. Metal bags that polished to a shine were also new and modern looking. Bags were an investment, and as such were made to last. Women of this era would purchase bags hoping to use them for many years to come.

1938, A simple brown handled bag was functional and stylish for modest times

Black, brown or white was the most popular color for a practical day bag. These classic colors paired well with any outfit regardless of the season. White, especially, was a color not previously used in handbags but extremely popular in the 1930s. However, bags were available in a myriad of hues, depending on the wearer’s taste and budget. The Birth of the Clutch Bag

In the first half of the 1930s, fashionable purses were carried close to the body, held in a hand, or carried under the upper arm. By 1934, small finger loops were attached for day and evening styles. They were too small to be very practical, but a little more useful nonetheless. Imagine trying to hold a handbag, pair of gloves, and a cocktail in one hand!

By 1937, longer handles were in fashion, freeing women from carrying them in hand. They were also growing larger just as sleeves grew wider and hemlines shorter. Ease and comfort were leading the way into the utilitarian ’40s.

The clutch bag was a popular style of bag during the 1930s, the simplistic shape complementing the streamlined silhouette of the period perfectly. As the decade progressed, handbags became more 3-dimensional in form. This in turn allowed a higher level of practicality to be achieved. Handles were also added both in soft leathers and fabrics or new hard plastics. A selection of bags to create a 1930s style. This excellent Anne Marie of France purse from the Metropolitan Museum is a perfect example of novelty styles of the period.

By the 1930s, more women were entering the workplace than ever. Clothing became more practical, with accessories following suit.

While accessories conformed to the level of practicality required for the modern woman of the 1930s, they were far from dull. As clothing became streamlined, accessories and trims adopted an almost showcase status. Purses along with buttons, buckles, and hats all became qualifying canvases onto which to express a level of whimsy and eccentricity.

Schiaparelli produced many outlandish designs during the 1930s, due to her collaborations with Surrealist artists of the period. Bags in the form of flowers, birdcages, pianos, and even telephones were all produced by the label. The Museum at FIT owns her marvellous ‘Poesy’ bag, which can be viewed online here. This 1930s silk purse from the Metropolitan Museum demonstrates a classic Deco shape.

However, for those less desirous of such a visual statement, various materials could be utilized to produce this effect. Early plastics such as Bakelite were the perfect choice for handbag handles and decorative details such as flowers, tropical fish, and travel themes. Clasps could also be ornate, featuring classic Art Deco shapes or quirkier designs such as acorns or bows.

One unique style of bag was the box bag. Unlike the flat clutches, the box was square or rectangular with semi-soft or hard sides. Most examples I have seen favored velvet sided box bags with short plastic handles. These charming purses were still small, but carried more items than a clutch. 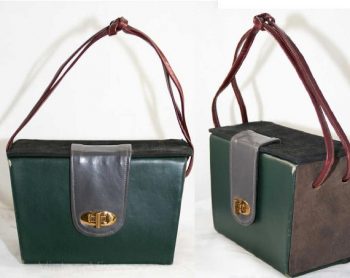 While daytime bags and purses were made to be functional and practical, evening styles were made to be beautiful. Evening bags were small in size, allowing only enough room for the absolute essentials. The shape of evening bags echoed the styles popular for daywear, only on a smaller scale. Envelope clutches were popular, as were small fabric purses. This Koret purse from the Metropolitan Museum demonstrates the beautiful detail incorporated into evening bags of the 1930s.

Materials utilized for evening bags could include rich fabrics – namely satin, velvet, and brocades. Many plain leather handbags were treated with embossing or stamping and painted in silver to make them look rich. Often, the purse would be made to match the wearer’s outfit, so gowns of silk and satin may have featured a coordinating bag or purse. Generally, a woman would always select a different handbag to take her from day to evening.

This illustration from 1933 shows the dainty size of evening bags.

Most evening styles were made to be held in the hand or beneath the arm. Some featured short straps so as to wear the straps around the wrist. 1930s Bags and Purses for Leisure In the 1930s, as travel became fashionable and more accessible, this in turn created a whole new wardrobe dilemma.

Women wanted to utilize handbags of pale colors in order to match their holiday wardrobes. During this time, sun-kissed skin was highly fashionable, as it represented (ironically) health, youth, and wealth. Holidaying in the sunny climes was just the ticket to achieve this fashionable glow.

Fabric bags with rope handles were made to match play clothes, beach pajamas, sun dresses, and hats. They were significantly larger than fashionable day bags, able to hold a change of clothes, shoes, hat, sunglasses, and sun lotion. However, bags of linen and straw in pale shades of creams, mints and lemons easily showed dirt – which was definitely not fashionable. To solve this problem, manufacturers concluded that fabric coated with a cellulose nitrate mixture would effectively render the fabric wipe-clean. Hence, Rexine or Rodolac was utilized in the production of summer bags and purses from around the mid 1930s onward. Key Styles and Features of 1930s Bags and Purses

The 1910s and 1920s saw women utilizing bags as a practical, functional item. However, during the 1930s, bags were elevated from an item of function to achieve showcase status. Designers were realizing the potential of this key fashion accessory. Whether it be through the quirky shapes of Schiaparelli’s surrealist designs or the practical yet quintessentially Deco shapes of the humble clutch, the 1930s saw the development of the handbag as a true fashion accessory.

Shop 1930s new and vintage handbags for day and evening:

We are Debbie and Oscar, your guides to dressing up like decades past. We are here to help you find clothing online and learn about vintage fashions as worn by everyday people, just like you. Need help with your outfit? Ask us anytime.
« 1900s Edwardian Men’s Clothing, Costume & Workwear Ideas
Vintage Men’s Socks History-1900 to 1960s »