During the early 1900s, Edwardian men’s clothing was relatively formal, with specific outfits worn at different times of the day. Interestingly, it was during the 1900-1919 years that for the first time, clothing started to be mass-produced. This reduced the need to have something tailor-made and ready made clothing more accessible for all, regardless of wealth or social position.

Although this article largely focuses on the different 1900s men’s fashion trends that a nobleman would wear during this decade, we do also include the often overlooked Edwardian men’s working clothes. Before the turn of the 20th century, older gentlemen wore frock coats, while younger men were opting for morning coats. However, in 1900, sartorial rules were beginning to become less restrictive and morning coats were slowly declining in favor of sack suits, which were usually worn later in the day. It was most likely an age thing, where the more senior population were quite content in their traditional frock coats, while on the other end of the scale, younger men favored the sack suit, deeming morning dress unnecessary.

Costume Idea: For the more traditional Edwardian gentleman look during the morning, opt for a frock or morning coat over a double-breasted vest. Your shirt should have a stiff detachable collar, and be worn tucked into your gray and black striped pants. Don’t forget your cane and top hat!

Original knee-length frock and morning coats can still be picked up, as can reproductions. Wearing such traditional attire with your stiff collar and a silk topper on your head, you will instantly start strutting around like a nobleman. Classic morning suit of tailcoat, striped pants, double breasted vest, club or wingtip collar white shirt, white gloves, cane, lace up dress boots, tie, and silk top hat. Many modern morning suits will be fine to use with only a shirt and collar change to match the decade. During the day, men would wear a sack suit, the forerunner of the modern business suit, and as worn by a teenage Franklin Roosevelt. As mentioned earlier, the sack suit was starting to be worn by some right at the start of the day. Vests were usually single-breasted and would either match the sack coat with pants in a contrasting fabric, or the vest would be contrasting with the coat and pants matching. This gave the wearer a neat and composed look. If you are feeling a little dandyish, choose a brightly colored vest to stand out from the crowd. The sack coat was often double-breasted and featured quite a high neck, with short lapels. Moving down the body, sack suit pants were shorter and narrower than morning dress pants, but not so short that the socks were ever visible, like you often see today. Costume Idea: If you avoid slim fit options, three button classic fit suits can often replicate the boxy cut of the sack suit. A white round collar shirt and necktie would have been worn underneath. A derby/bowler hat is the ideal choice of hat, or for summer, a straw boater. 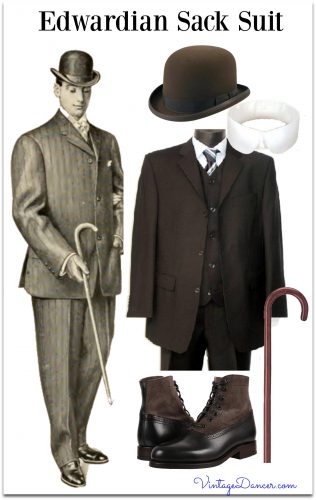 In the evening, an Edwardian gentleman would be expected to dress for dinner in black and white eveningwear. Rather than ‘Netflix and chill,’ people in the early 1900s preferred a theater double-bill. If you should find yourself transported back in time, you would be expected to wear a dark tail coat and pants, a matching vest, and a pristine white dress shirt complete with winged collar and bow tie. Tuxedo jackets were also permitted in place of the more traditional tail coat, while a Homburg hat was the best choice of headwear for the evening. If you were entertaining at home, as the host you could keep your tail coat or tuxedo jacket hanging up in the closet and wear a smoking jacket instead. Usually made of velvet and featuring extravagant frogging detail, the smoking jacket came in a range of rich colors including burgundy, midnight blue, and bottle green. For an added touch, wear a matching smoking cap with tassel (and don’t forget to share those cigars with your chums).

Tail coats, tuxedos and smoking jackets can all be found both second hand and new. For modern inspiration for this style of Edwardian men’s fashion, take a look at photos from Royal Ascot, Britain’s famous annual horse racing event.

Learn more about putting together a formal evening look here. At the weekend, the Edwardian gentleman enjoyed retiring to the countryside and indulging in outdoor pursuits such as hunting. The best time of jacket for this was a single-breasted Norfolk jacket, with belt or half-belt and a loose fit for ease of movement. Made from tweed, the Norfolk jacket was best paired with knickerbockers and ankle-high boots in black, gray, or brown.

Many new sports were emerging and growing in popularity between the latter of the 19th century and the beginning of the 20th. Of course, each sport required its own set of clothing, with tweed, flannel and knitwear all popular. If sailing was more your thing then a navy blazer, cut like a sack coat with patch pockets and brass buttons, was ideal and on trend for 1900s fashion. I found this great set of Edwardian style men’s sporting tweeds on Amazon.com Unless they were provided with uniforms, working-class men obviously needed clothing that was strong, sturdy, and durable. Carrying out tough physical tasks and working long hours, popular clothing materials were canvas, duck, corduroy, and leather. Clothes had to be roomy enough and if working outdoors, they had to keep men warm. A sheepskin vest was often part of a working man’s outfit to offer an extra layer of protection. Men in factories dressed a little smarter, mirroring the high society’s 1900 fashion trends. Rather than being tailor-made, these would have been mass-produced clothes. White high-collared shirts, bow ties, vests, and hats were all commonplace on the shop floor. Heavy-duty work aprons would also be worn to protect clothes against dirt and grime.

Vintage style workwear is a really popular look at the moment. Men are turning to these hard-wearing items of clothing regardless of occupation, preferring the simple and classic yet rugged styles. Due to the fact that workwear from the past was put under immense strain, finding vintage pieces in a decent condition is becoming increasingly difficult. Thankfully, a lot of reproduction workwear is available.

Working men would also have a ‘Sunday best’ suit to wear to church and other formal gatherings. This would be a sack suit, in a dark fabric. We are Debbie and Oscar, your guides to dressing up like decades past. We are here to help you find clothing online and learn about vintage fashions as worn by everyday people, just like you. Need help with your outfit? Ask us anytime.
« Old Hollywood Glamour Dresses
1930s Handbags and Purses Fashion »