Although I haven’t been able to sew for a few year now, I have been dreaming of making a 1930s day dress. 1930s formal dresses and gowns are easy to find, but day wear is less common. If I want the most historically accurate dress, I know I will need to get out the sewing machine, choose a pattern, find fabric and notions, and get to work! But before I do, I need to do some homework.

The final step is the one that makes me the most nervous. Recreating a 1930s dress means choosing between a genuine vintage pattern (that usually lacks directions or multiple sizing), a vintage reproduction pattern (drafted from original patterns but with updated directions and multiple sizes) or using a modern pattern and modifying the design to look more 1930s.  I usually choose the third option, but this time I want to do things right. Choosing a 1930s reproduction pattern is the best choice for my moderate sewing skills.

There are a few brands that offer vintage reproduction patterns for 1930s clothing. Reconstructing History is one of my favorites simply because of the sheer number of options. There are currently 16 different options for 1930s dresses in both day and evening styles.

I reached out to the owner and designer Kass McGann about doing a review of one of her patterns. She gladly agreed. However I still don’t have enough free time to sew, so I asked Jenny Meams, sewing blogger at Annotations of Jenny, if she wanted to choose a pattern and sew up a dress, and she said yes! Kass graciously provided the pattern and I covered the cost of shipping the pattern to Jenny in the UK.

Based on Jenny’s experience with the pattern and how amazing her dress turned out I certainly will be making my own dress sooner than later.

Before we get to the review I asked Kass to share a bit about the fascinating history of 1930s sewing patterns. She is so knowledgeable she could write an entire book on the subject. For now here is a brief overview followed by Jenny’s Pattern review. The Great Depression affected the pattern industry as it did every industry in the country.  In the 1920s, Butterick Pattern Company introduced the first printed pattern instruction sheets and McCall Pattern Company released full-color covers.  But declining fortunes in the early 1930s caused a sweeping change.  Patterns that had been selling for 45 cents in the 1920s dropped to as little as 15 cents in the early 1930s. Pattern companies accommodated the lower prices by producing unprinted patterns.  These patterns were cut from tissue in one size with no printed marks on the tissue itself.  Punches in the tissue such as circles, triangles, and squares were used to indicate grain direction, fold lines, and notches.  A legend was provided in the pattern instructions.  The pattern user lined up the three circle cuts on each piece with the fabric grain, placed the double circles on the fold, and cut her garment pieces.  Some companies went back to scant sewing instructions on the outside of the envelope as well, pulling back from full instruction sheets until economic conditions improved.

As part of President Roosevelt’s New Deal legislation, the National Industrial Recovery Act of 1933 helped the pattern industry by establishing a national public works program through the Public Works Administration until 1935.  This bolstered the fragile industry through the worst years of the Great Depression.  NIRA stamps and logos can be found on many patterns from those years. The Great Depression stimulated innovation in the pattern industry unknown before the financial crisis.  Despite the inclement financial climate, some rather prolific pattern companies got their start in the 1930s:  Advance, DuBarry, and Hollywood to name a few.  Newspapers and mail order houses began producing patterns in the early 1930s, spreading cutting-edge fashion to rural areas where patterns had previously been unavailable.

Additionally, a new garment — the House Dress — came into being.  Designed to allow a woman to reserve her better clothing for wear outside the home, the House Dress was a simple garment that could easily be sewn at home from inexpensive materials and easily and inexpensively replaced when it wore out.  House Dresses were made from such second-use fabrics as muslin feed sacks, cotton curtains, and household linens.  Ease of laundering also made these Depression-era innovations a favorite of women working in the home.
The scarcity of disposable income during the 1930s also created a change in fashion silhouettes.  Fabric was used more efficiently in skirts that were longer than in the previous decade, but more fitted to the body.  Innovative cuts and curved seams added interest to designs without adding more fabric yardage.  The slender, statuesque style associated with the 1930s is a product of making more out of less.

Today’s review will feature a Reconstructing History sewing pattern review, pattern number 1304 – the 1933 Day Dress with Jacket. Although this pattern comes with a jacket pattern, for the purposes of this review I chose to make up the dress only.

Reconstructing History have an extremely wide and varied scope of patterns available – from the 14th century up to the late 1940s. In addition to women’s patterns, they also cater for men, and even have a section for Steampunk patterns. Owner of the business, Kass McGann is a historical clothing researcher and an avid living historian. Reconstructing History was founded in 1997. Their range of sewing patterns launched in 2003, aimed at re-enactors and those with a passion for authentically replicating historical styles. When I was given the option to select a pattern from Reconstructing History to review of my own choosing, I knew I would want to select a 1930s pattern. The 1930s are one of my favorite decades, and I wanted to get lots of wear out of the finished garment.

The pattern comes with a booklet which contains instructions and historical notes. At the back of the booklet various period stitches are listed, with diagrams and details on how to execute these. Separate from the booklet is a page giving a back view of the pattern, a brief description, suggested fabrics, sizing and yardage requirements. I did notice in the description of the pattern that an additional sleeve option was mentioned for the dress, which is not illustrated in the pattern. So, whilst the pattern artwork depicts a long sleeved version for the dress, there is also a short cape-sleeved version contained within the pattern. Now onto the actual pattern. The pattern pieces are printed on high quality paper, and are single sided (excellent if you do not enjoy tracing patterns!) The pattern contains sizes A – 28 inch bust, through to K – 48 inch bust. This means that if you are between sizes, or wish to make the pattern up a few times in different sizes – you can do that (albeit you would have to trace the pattern though!) This is wonderful, as it means that the pattern can be made in a variety of sizes, with the pattern grading already done for you. In addition, it means that you only have to buy the pattern once, rather than multiple times for additional sizes. 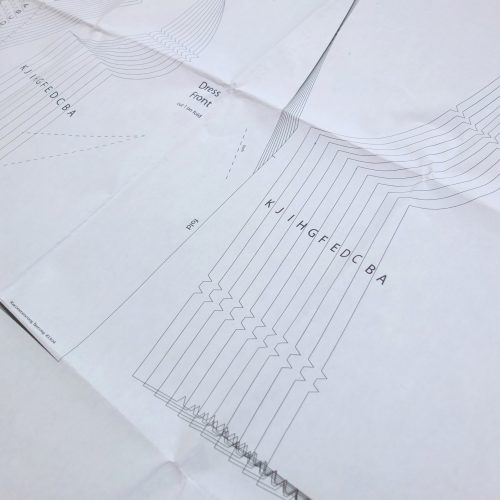 The pattern contains 11 different sizes, each labelled with a denoting letter.

I decided to make a toile (a kind of ‘test run’ version of the garment, also known as a muslin. ) Based on the sizing chart, I went for the size E – 36 inch bust, 39 inch hip.

The pattern features some interesting design details which are typical of the early 1930s – one of the main reasons I choose this particular pattern. However, these design details definitely add to the overall sewing and construction time, something to bear in mind if you are considering making this dress. The bodice in-progress, with the neck frills pinned into place at the shoulder.

Once I had made the toile and was satisfied with the fit, it was then time to select fabric for the finished garment. As the pattern is dated to 1933, ideally I wanted to use fabric that suited the era. I found a wonderful fabric printing company that specializes in authentic reproduction textile prints from the early twentieth century – Maltings Fabrics. The completed dress. The fabric looks beautifully authentic, and also has lovely drape and movement.

The fabric I chose is the Hampden print, printed onto viscose crepe. The print originated from an original late 1920s/early 1930s jacket, which you can see in a post I published over on my blog here. Here you can see the black contrasts, which really enhance the interesting 1930s design features.

To add some contrast to the finished garment, I decided to utilize black viscose for the neck frills, belt and cuffs. I did intend on adding black piping to the skirt yokes to highlight the interesting V shapes, but in the end decided against it. In order to reinforce specific sections of the dress, I added fine sheer fusible interfacing from the English Couture Company.  I fused this to the front bodice and front bodice facing where the bound buttonholes would be, both skirt yokes, and along the left hand side where the zipper would be inserted. The 1930s belt buckle I found matched the shades in the pattern perfectly!

I finished the dress with an original 1930s belt buckle, which was a lucky find on Ebay. I hoped it would be a good color match when I ordered it, and I was thrilled when it arrived to discover it matched beautifully!

Overall, I would say the 1304 pattern was of good quality, with some nice additional details included – historical notes, information on period stitches and detailed instructions. I liked the convenience of having multiple sizes in one pattern.

The actual pattern sewed-up nicely, and the instructions were certainly more detailed than instructions that come with original vintage patterns. Reconstructing History have a vast array of patterns to choose from, making them a good choice for those wishing to recreate styles of the past accurately.

We are Debbie and Oscar, your guides to dressing up like decades past. We are here to help you find clothing online and learn about vintage fashions as worn by everyday people, just like you. Need help with your outfit? Ask us anytime.
« 1940s Zoot Suit Girls, La Pachucha History
Vintage Men’s Wedding Guest Clothing Ideas »