While men’s 1940s business attire moved toward formality, casual style went the opposite way. Ease and comfort blended the lighter business suit style with sports wear established in the previous decades.  This merging resulted in sports coats instead of business suits, relaxed button up shirts in new colors and knitwear that exploded in popularity during this decade. 1940s men’s casual clothing looks formal to us today, yet many of our modern favorites took root during this time, such as denim jeans, T-shirts and Hawaiian shirts. Without these inventions, where would our style be today?

Sport coats were a newer trend that gained popularity in the 1930s. They, too, came in a smattering of Glen plaids, herringbone, chevron checks, and chalk stripes. In the early 1940s, shetland and tweed remained popular in the 4 button model with leather elbow patches. The newer 3 button notch lapel sport coat was an increasingly popular style because it looked more relaxed and less conservative. The fit slimmed down as well into a nicely tailored coat that had lost much of the “drape” look of the 1930s. 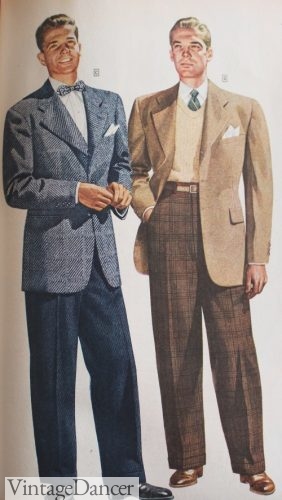 Sport coats were worn with solid colored pants that were darker than the sport coat, with the exception of white pants, which were primarily worn with a navy blue sport coat. Military tan pants were especially common and coordinated well with all sport coat colors. Most sport coats had wide rounded notch lapels and two very large square pockets that were either flap, slit, or patch styles.

The 1942 War Production Board restricted patch pockets, pleats, belts, and vents on sport coats. The limited access to wool also meant coats were being made of alternative fabrics such as tweed, flannel, and synthetic blends. A limitation in available colors also produced a bland, military inspired color palette.

After the war, men’s sport coats were the first to throw off drabness and minimalism. Patch pockets returned even bigger, patterns were bolder, and colors were no wear near Army tan.

The bush jacket, common in the early 1930s, returned in a hip length style complete with 4 pleated patch pockets and an extra wide collar. It was made of colored flannel instead of the previous light cotton tan. On many jackets, buttons were replaced by the zipper.  Fashionable men wore these summer bush coats with Indian madras walking shorts (knee length) or casual flannel sacks and a foulard scarf. By the mid to late ’40s, the influence of California fashion was felt around the world. The sports coat loosened up even more around the waist to an almost straight line from shoulder to hip. Prints and textures increased, as did vibrant colors reflecting the bright and cheerful California sunshine. Newer fabrics gabardine, twill, and flannel were lighter and smoother for a polished look. Blending solids and patterns also emerged in the late 1940s. It wasn’t uncommon to wear a sport coat with a solid front body with plaid or check print arms and back. Western influence was also seen in a yoke design around the chest and shoulders.  By 1948, the new Bold Look was in place. It had men wearing wide lapels, broad shoulders and big patterns. Corduroy and seersucker fabrics contributed to this period of confident casualness.  Read more about the bold look and 1950s men’s casual fashions. 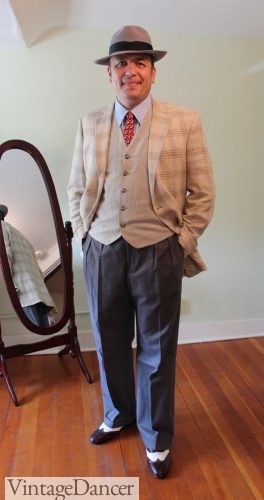 Trousers sold separately from suits were worn for casual day wear, sporting events, and some work environments. They were a bit more colorful and comfortable than suit trousers and made of lighter weight wool blends in the cooler months and even lighter cotton poplins, flannel, gabardine (rayon blend), and seersucker for tropical climates. Solid colors of green, grey, blue, brown, and tan were staples, while more unique patterns like plaid, pinstripes, diagonal stripes, pin check, and herringbone in medium blues, maroons, and browns were favored. The California influence was seen in new colors such as russet, bright yellow, gold, and a blue-green.

Casual trousers featured a narrowed high waist and full hips with wide legs. Flat fronts were preferred over a single pleat, although both were acceptable. Waistbands had dropped belt loops, which always had a thin leather belt worn with them. Shirts were worn tucked in, exposing the pants fully. Shirts rarely matched the pants. Instead, tan pants paired with maroon shirts, green plaid with brown, pinstripes with blue,  etc. The other type of casual pant was the blue jean. They were made for heavy duty work wear, but were quickly adopted for home work in the Victory Garden. Country men wore them as part of their Western style. Teens (even girls) wore them as the uniform of their generation.

1940s denim jeans were high waisted with a long crotch and wide legs that folded up. They had large patch pockets on the back and deep side pockets. The denim was always a dark wash.

During the war years, rivets were removed, decorative top stitching was removed or painted on, and the adjustable back strap disappeared for good. The businessman’s dress shirt had a counterpart in the button down sport shirt. The look was nearly identical, but the casual shirt had a wide, soft, pointed collar. The other style was the sport collar, which had an extra wide point collar that flared out towards the armpit and a smaller notch underneath. This created a small V opening– a much more breathable and relaxed style. Both collar styles were equally popular among men. Solid colors of cotton twill or rayon made casual shirts light yet durable.  Shirts had boxy long sleeves and were straight cut along the bottom.  They had two chest pockets that came in welt, button or fold over flaps. Colors could be plain tan, brown, blue, green, or maroon with prints of large plaid, check, windowpane, or vertical stripes. In winter, as late into the 1950s, plaid shirts were favored above all other prints. Pendleton still makes plaid shirts from their 1940s/1950s patterns. The Hawaiian ‘Aloha’ shirt — featuring hand painted tropical scenes, birds and flowers — was introduced after the war. They had a sport collar and were worn untucked with a loose, boxy fit. Most had the classic two chest pockets, but some tropical prints only had one pocket. They were usually made of a light cotton or rayon. They were established as tourist shirts prior to the 1940s, but after the war, men who were stationed or passed through remembered the natural beauty of the islands fondly. Men returned to the area as tourists or at least bought up souvenir Aloha shirts to remember their experience. Native Hawaiians who no longer had access to overseas clothing began wearing the shirts, too. The fad for the re-named Hawaiian shirt was propelled forward even more when in 1953 the movie From Here to Eternity depicted the lead characters wearing Hawaiian shirts as they responded to the Pearl Harbor bombing. After that, the Hawaiian shirt became famous. Hollywood’s wave of American Western movies spawned an interest in western style clothing for boys and men. Western shirts, hats, boots and trousers were popular equally with city and country folk. You could say that the Urban cowboy began in the 1940s.

The western shirt was another casual shirt style. It has the same high button up collar as dress shirts, although some western prints were made into casual shirts with sport collars. Western shirts had yokes with piped lines or contrasted two color combinations. A western knot tie or bolo tie was a frequent accessory.

“The 1940s-50s became known as a Golden Age of Western shirts, based not only on the popularity of the new style, but also on the sheer artistry and construction that went into many of the production shirts. Snaps and yokes would remain stylish signatures of Western shirts, but embroidery and fancy pocket treatments all but disappeared until the 1980 movie Urban Cowboy revived interest in elaborate details. “ 100 Years of Western Wear by Tyler Beard, Jim Arndt Some form of knit shirt has existed since the 1920s. The 1940s knit sport shirt came in solid, wide vertical stripes (the fisherman look) and fun novelty prints and designs.

The knits were textured, not smooth, like a short sleeve sweater with a small ribbed crew neck. Some shirts also had arm bands. The waist of the shirt was short (pants were high) with a wide 4-6 inch band that was either worn tucked into pants or worn on top (teenagers). They fit very snug– hello muscles!

The Polo shirt was another pique cotton shirt with a soft knit collar. Genuine white polo shirts had a button up 1/4 length opening, while later styles were simply pullover knits with a soft collar. It was not a mainstream style until the 1950s. During the war, servicemen were assigned smooth white undershirts to be worn underneath uniforms. These comfortable cotton knit shirts were worn off duty, and when the war was over men continued to wear them as casual attire. It was still taboo to wear them in public, but at home, anything goes. Retailers designed a similar smooth knit T-shirt that was more appropriate for sports attire. It could either be a round crew neck or small V-neck in plain white, tan or blue.  It fit a little looser than knit shirts, much like T-shirts today. The final piece of causal clothing for men in the 1940s was the V-neck sweater vest. Usually, a cool weather layer was was worn on top of casual button up shirts with a sport coat and tie. For some sports, like tennis and golf, the sweater vest became part of the uniformed look despite the heat. V-neck pullover vests were wool knit for extra warmth in winter and knit with rayon/cotton blends in summer. Pullovers usually contrasted with the shirts underneath and the trousers, creating a very colorful outfit. For example, you might see a tan shirt with green slacks and a blue vest, or a wine colored shirt with navy pants and a grey vest.

Many sweater vests had traditional patterns such as Fair Isle, checks, and stripes. Plain color vests were hardly ever boring with the use of cable stitching, large ribs, and other knitted textures.  Some had a contrasting color binding around the neck and arm holes.

A sweater vest could also be button up, like a sleeveless cardigan sweater.  They could also not be knit at all. Instead, wearing a suit vest with sport shirt and coat was an option, and one that was common during the war years when clothing was limited (see picture at the top “1940s Sport Coat”). All Together Now – Men’s Casual Clothing

For your own 1940s inspired look, you can use genuine vintage clothing, reproduction clothing, or vintage inspired new clothes. 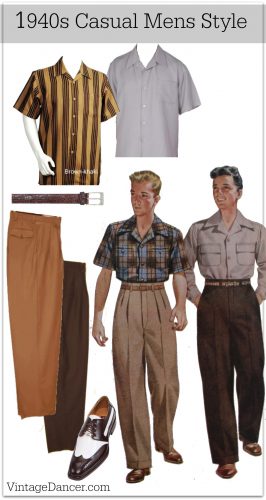 We are Debbie and Oscar, your guides to dressing up like decades past. We are here to help you find clothing online and learn about vintage fashions as worn by everyday people, just like you. Need help with your outfit? Ask us anytime.
« Vintage Men’s Wedding Guest Clothing Ideas
1930s Shoes History: Popular Styles for Women »