In the last 100 years, I doubt designers have ever been more challenged with making shoe designs than they were in the early 1940s. With World War II in full swing, materials were either rationed or used entirely to support the war. Between material restrictions and the dying popularity of pantyhose, there was a revolution on the fashion front – err, bottom. To understand footwear of the 1940s, one must understand a bit of history. Rations and restrictions put in place by the government limited what designers could use. Also, since many men were fighting overseas, women became the bread-winners of the households. They needed shoes that were practical for work, yet inexpensive because of limited salaries.

One such example of a restricted material was leather. Leather became entirely unavailable as it was devoted to the war. Instead, the usage of mesh, fabric, and reptile skins became popular out of necessity.

These velvet and mesh shoes from Dancestore.com are a great example of an alternative material. They are made of a faux-velvet. Another reason  for the changing shoe fashions was the restriction placed on heel height. Shoes shrunk to the lowly height of one to two inches. However, when there’s a will, there’s a way. To gain height, ‘wedgies’, a cork-heeled wedge shoe, became a popular design. Fortunately, there are a variety of shoes inspired from the classic 1940s available today, so you will be able to gain a bit of height! Being excessive in anything was taboo in World War II. Once again, resources were in high demand and were not to be wasted on vanity, and so shoes of the ‘40s are known for their simplicity. Decoration and accessories were minimal and considered gaudy. As you shop, you’ll notice simple and clean lines.

These Mary Jane heels – a staple for the women of the ‘40s – are a great addition to any wardrobe or themed costume. They feature the simple, undecorated look. During the war, open toed shoes were considered dangerous and impractical in a work setting, especially at factories. Working women knows as “Rosies” first started to wear men’s loafers or moccasins to work. They were comfortable versatile and quiet – a feature very important to pilots – both men and women.

After the war, open toed shoes became the rage! Peep Toes opened the front of a shoe just enough that they weren’t considered dangerous. Many regular women wore peep toe shoes, however today they are mostly associated with Hollywood Bombshells or Pin-Up girls. With the opening of the toe came the opening of the heel and, well, the rest of the foot. Many sandals were chunky with small vents on the side and slingback strap. As the decade progressed, the sandal opened up to be more airy with many straps across the toe and either a t-strap or slingback heel strap. Ornamentation was minimal. A bow over the toe was a nice and simple accent. Towards the end of the decade, after the war ended, there was an increase in heel height and embellishment. Women were also able to return to their favorite leather pumps. By the end of the ‘40s, the shoes were blurring into what would become the fashions of the 1950s.

A shoe that became very popular, and that is still one of the defining looks of the ’40s, is the heeled Oxford. The heel height varied from very low to about 3”, so shop for whatever your preference is. This heeled oxford from Naturalizer is a beautiful example, and even sports some faux-reptile skin. 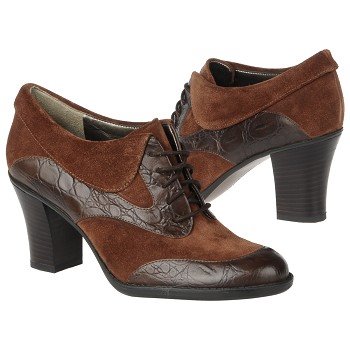 Whether you’re shopping for a costume or personal fashion, keep in mind that classic ‘40s shoes:

You should be able to comfortably wear a pair of ‘40s shoes (women of the decade were busy supporting the boys abroad in them, after all!) so don’t be afraid to invest in a nice pair. The shoes are now considered a classic look, and as such you’ll be able to wear them with everything from dark-wash jeans to business-wear skirts to your sailor pin-up!

We are Debbie and Oscar, your guides to dressing up like decades past. We are here to help you find clothing online and learn about vintage fashions as worn by everyday people, just like you. Need help with your outfit? Ask us anytime.
« Victorian Gloves | Victorian Accessories
Easy 1940s Men’s Fashion Guide »