For women during the 1940s, the importance of personal presentation and looking one’s best was of high priority. Frivolous as that may sound, women were encouraged to be well presented to the best of their abilities. Red lipstick, perfectly rolled pin curls, and gently rouged cheeks were all advocated. This was in order to aid with the general morale of the country. It was important to keep spirits high and optimistic during troubled times. A pretty face and perfectly styled hair adorned with 1940s vintage hair accessories helped keep spirits up. Clothing rations restricted the options available in attire. As a result of this, women started to find more creative solutions to maintaining a fashionable appearance. Snoods are similar to a hair net, in that they sit on the crown of the head, scooping underneath the nape of the neck to encase the hair. Snoods were by no means a new invention in the 1940s — indeed they had been around for centuries. During the Middle Ages, women wore hair nets and snoods often decorated with beading underneath their bonnets or hoods. 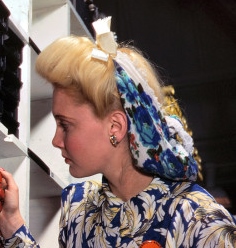 A hair Snood scarf from the early 1940s.

The snoods of the 1940s were crocheted, making them popular for a number of reasons – crochet itself was a popular pastime with many women learning or already able to do so, yarn was relatively cheap or could be re-purposed from an unwanted garment, and the wide and varied selection of colors available made the possibilities endless. As with turbans, snoods were popular for another reason – they kept the hair neat and tidy with almost minimal effort. As women were finding themselves in new roles, they needed to be able to dress their hair attractively, but swiftly. Snoods were the perfect solution. They also hid dirty unwashed hair until she could get to the salon.

Snoods primarily worked best with shoulder length hair or longer, as the hair itself created the volume and shape in the snood at the back. Often, snoods would be teamed with other 1940s hair accessories, such as hair flowers or bows clipped into place around the hairline. Some styles had ribbon fastenings built in, which may also have been tied into an attractive bow. 1940s snood for evening wear. It probably had rhinestone woven into the net.

Women would arrange the snood to hold the hair from the crown, keeping the front sections free. The front sections of the hair would then be either styled into small rolls, bangs or a large faux-bang pompadour roll.

Hair flowers were already a popular accessory choice by the 1940s, but up until this time had mostly been worn for evening occasions only. However, from the 1940s on, hair flowers were worn prolifically due to their wonderful versatility. Women with hair of any length could dress their crowning glory with a hair flower or two, thereby instantly adding a hint of femininity to an outfit. 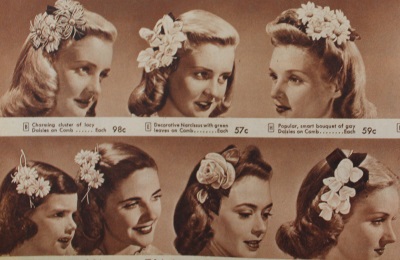 They could also be teamed with other 1940s hair accessories, such as the previously mentioned snoods. Hair flowers were often worn with hats, carefully pinned along the hairline and just peeping out from underneath the brim of the hat. Flowers with veils were an alternative to hats as well. They were especially popular with teenagers.

1947 flowers for small hats or hairstyles Hair flowers, bows and headbands for girls and teens

Flowers add an enduring naturalistic quality to an outfit, creating a hint of whimsy to what was perhaps a previously sombre ensemble. Popular flowers were white gardenias, roses, daisies, narcissus, and asters. Colors could be various shades of red, yellow, medium blue, pink, or white. Flowers were artificially made from rayon or silk, including the green leaves on some models. Today, as in the 1940s, the appeal of hair flowers prevails.  For a simple, inexpensive way to add to touch of vintage glamour to an outfit, hair flowers are just the ticket! Hair flowers are a great and inexpensive way to accessorize an outfit. The ‘language’ of hair bow placements from the early 1940s.

In the same case as the other hair accessories previously mentioned, bows and ribbons were an inexpensive and accessible accessory for women to make and wear during this period. Bows could be tied from ribbons and scarves, or fashioned from fabrics.

Women wore them tied around the head or backed onto a clip or comb so as to clip into the hair. Some of the bows were very oversized, creating quite a statement.

A large hair bow accessorizes this outfit from 1944 perfectly.

Whilst bows may bring to mind those of juvenile years, during the 1940s women of all ages were wearing them as a hair and fashion accessory. For a beautifully understated, feminine look, bows may adorn a low ponytail in the manner of Betty Grable.

For a stronger style, add a bow to the crown of the head among a cascade of poodle curls. 1947 ribbon headband tied in a bow 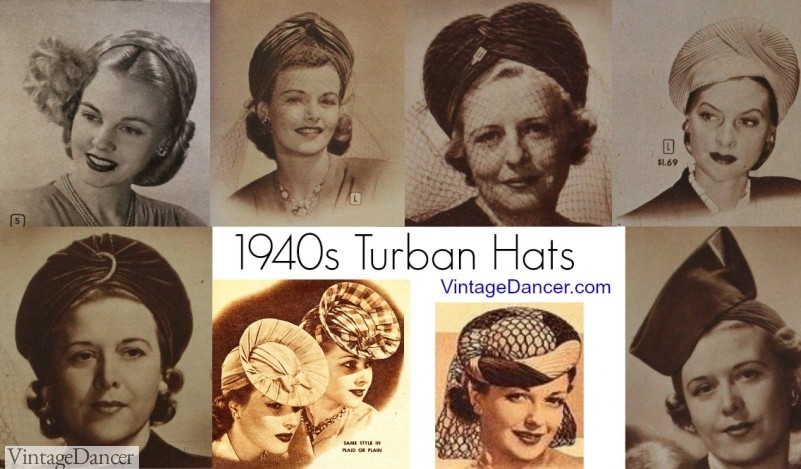 Learn about the history of Turbans and other 1940s hats styles

Similarly to the hair snood, the main purpose of the turban was to keep hair safely tucked away and out of the face.

Interestingly, for a decade when hairstyles became increasingly elaborate, turbans were the complete opposite — they enclosed and covered the hair. However, turbans became incredibly popular during this decade, as women simply could not dress and style their hair in complicated pin curls every single day. A turban was a simple and very stylish solution. 1940s advertisement for turbans and hats.

In addition to purchasing ready-made turban hats, turbans could be created from a simple square scarf folded in half. Although turbans concealed the hair, they did not ignore the fashion for hair to be high and sculptural. Ready-made turbans featured complex pleating and gathering details, creating volume at the front and crown of the head. Here is a sewing pattern and tutorial for tying a turban.

These could be further adorned with hair flowers pinned and clipped onto the turban itself, creating a statement head piece.

Ready-made turbans today are usually made from stretchy fabric, fitting comfortably over the head. To add further decoration, try pinning flowers to the crown or sides of the turban. Or, pin a brooch to the crown to mimic the trend for the height and decoration that was so popular during the 1940s. Turbans are an easy way to add a hint of vintage glamour to an outfit.

We are Debbie and Oscar, your guides to dressing up like decades past. We are here to help you find clothing online and learn about vintage fashions as worn by everyday people, just like you. Need help with your outfit? Ask us anytime.
« How to Accessorize a 20s Dress
1930-1950s Western Wear for Women and Men »