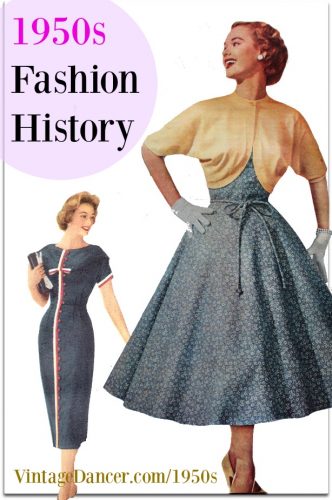 1950s fashion history. Part one of twenty in depth looks at women’s and men’s fashion of the fifties. In many ways, the 1950s took a big step back, especially for women. During World War II, while the men were away, women began to gain an independence that was rare before the war. They left their homes to work in offices and factories, earning and managing their own money. Clothing was heavily restricted throughout and just after the war — everything from the length of skirts to the size of collars was regulated. This resulted in a slim, straight silhouette. Women wore comfortable clothing like suits and shirtdresses, and even began to regularly wear pants, especially to work. They had to ‘make do and mend,’ buying or sewing well-made clothing that had to last and fixing garments that were past their prime. Learn more about 1940s women’s fashions here. 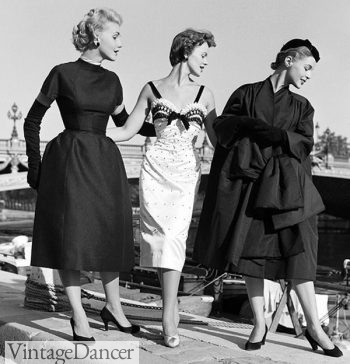 In 1947, Christian Dior permanently changed the fashion industry, creating the look that would dominate the next decade. Dubbed the ‘New Look’ by Harper’s Bazaar editor Carmel Snow, Dior’s first fashion collection, shown in Paris, was the exact opposite of the ‘40s look. The fabric was luxurious and voluminous. Shoulders were soft instead of squared, the figure was hourglass instead of boxy, and the short, straight skirt of the ration-happy ‘40s was replaced by a huge, billowing one that hit at mid-calf. There were also skirts that were so slim and fitted that women found it hard to walk. Bodices were extremely tight, accentuating a tiny waist.

The whole look was reminiscent of the mid-nineteenth century. To achieve the look, women had to once again squeeze into some serious undergarments. A boned corset achieved the ‘wasp waist,’ and bust and hip pads completed the hourglass figure. 1953- The Large, Full Skirt with a Tight Bodice was Also the Silhouette of the 1850s (Victorian Era) Many women were outraged, especially in the United States. Protests were held targeting Dior and his new clothing. Women had just gained a large amount of equality and weren’t ready to give it up — both in work and in fashion. The new clothes used excessive amounts of fabric, needed constant maintenance, and required a complete coordinated accessory collection to be “perfect.” However, after the hardships of the war, everybody was ready for a change, and by the start of the ‘50s, everybody was wearing the New Look. 1952 Matching Your Shoes and Purse (and Belt, Hat, Gloves, and Jewelry) was Desired

As men returned home from the war, women also returned to the home as wives, mothers, and homemakers. There was a migration to newly-built suburbs where life was supposed to be picture-perfect and traditional. Society became very conservative, and there was a rise in affluence. Racism and anti-communism were rampant, and there was an air of enforced conformity – everyone wanted to act and look ‘normal.’ Even teenagers adopted formality during the school day, but turned to new casual clothes on the weekend. The man was the breadwinner and the woman was the feminine ‘happy housewife.’ Instead of scrimping and saving, women began to spend a lot of money on getting dressed. Their appearance was linked to their husband’s success. Even if she was not wealthy, looking the part became an obsessive occupation. Radio, TV, and magazines reminded women daily of their need to be beautiful for their husbands.

The full look of the 1950s was mature, glamorous, and very put-together. Dresses, skirts, and undergarments were constricting, but a wide range of new ‘leisure clothes’ allowed people to dress casually at home. Women were expected to be impeccably dressed and groomed in public or when their spouse was home, always with coordinating hats, shoes, bags, belts, gloves, and jewelry. In privacy, women dressed much more simply and comfortably. Eventually, these casual fashions became public clothing as well. Men wore serious, somber business suits at their newly created office jobs, and leisure suits or slacks on weekends. Shoulders were broad and jackets were boxy. They were also expected to be well-groomed and put together, with suits and pants perfectly pressed. Read more about 1950s men’s fashion.

Paris, cut off from the world during the war, once again became the center of fashion. Designers held fashion shows twice a year, and the U.S. and Britain often bought the rights to copy the garments (or simply stole the designs) and churned out cheaper versions to be sold in department stores. Fashion magazines like Vogue, Women’s Wear Daily, and mail order catalogs had a sharp increase in product advertising that brought designer fashions into every home. Thanks to the war efforts, the U.S. had made huge advancements in mass production techniques and used them to create new ‘ready to wear’ clothing. Everyone was able to wear the latest fashions.

Led by Dior, many designers started contracting out the manufacture of some clothing and a wide range of accessories that were stamped with their labels. Everything from perfume to gloves, hats, bags, and ties were ‘branded’ by the designers. This practice is widespread today, as you can see by visiting any department store, but was a new idea in the ‘50s. Dior also set up boutiques all over the world – another novel idea that is the norm in fashion today. Fabrics were often luxurious, especially for evening wear. Velvet, tulle, silk, and satin were popular. Cotton and wool were often used for daywear, along with new synthetic fabrics. Polyester and rayon were used to make all kinds of clothing, from blouses and men’s shirts to dresses and suits. 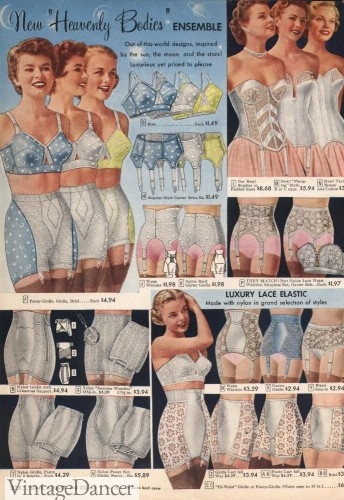 Nylon and elastic, conserved for the war effort, began to be used for a wide variety of clothing, especially undergarments. These fabrics were made into delicate underwear, nightgowns, and stockings. Nylon did such a good job of replacing silk stockings that they’ve been known ever since as simply ‘nylons.’

These new synthetic fabrics were seen as ‘miracle fabrics.’ They could be washed and dried easily, didn’t need to be ironed, and didn’t shrink.

Few designers chose to break from the New Look model, but a couple paved the way. Coco Chanel hated the New Look so much that she reopened her business after closing it at the start of the war. In 1954, she came back with slim suits – the brand’s signature look – in wools and tweeds. Jackets were boxy with no collar, and skirts were straight and comfortable. She topped the look off with costume jewelry and the famous quilted bag. Hubert de Givenchy unveiled his ‘sack dress’ in 1957. It was completely loose, taking the emphasis away from the waist entirely. It was to be the inspiration for the iconic tunic dresses of the 1960s.

The conformity of the ‘50s eventually backfired. Young people everywhere grew cynical, and the happy housewives started to feel trapped (there was a dramatic rise in the use of sedatives and anti-depressants during the ‘50s). The New Look lasted throughout the 1950s, but the high-maintenance lifestyle eventually gave way to the rebellious culture in the ‘60s. Teenagers wanted to be individuals who didn’t look like their parents, and their mothers were ready to break free again. Fads were short-lived and garments were cheaply made. Clothing wasn’t constrictive anymore, and was looser and much shorter. The flowing hippie look and the graphic mini-skirt gave women choices and in the way they expressed themselves.

We are Debbie and Oscar, your guides to dressing up like decades past. We are here to help you find clothing online and learn about vintage fashions as worn by everyday people, just like you. Need help with your outfit? Ask us anytime.
« Reproduction Vintage Sewing Patterns: Victorian to 1960s
Vintage Men’s Outfits -1920s, 1930s, 1940s, 1950s »