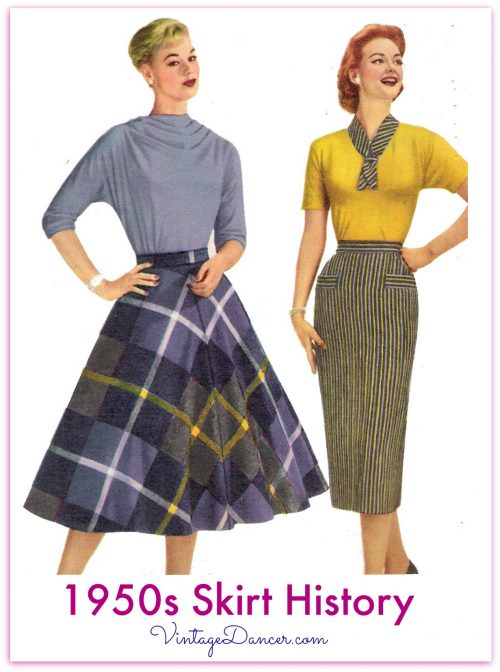 The New Look shape of 1947 carried over into the skirts worn in the ‘50s. Skirts were tight at the natural waist and were either very full or very fitted. The names of these style of skirts have changed over the decades. Today, 50s skirts are often called full circle skirts, swing skirts, pencil skirts, wiggle skirts, tea length skirts, or midi skirts. They are very figure flattering and fun to wear, which is why 1950s skirts are must-have items in any vintage fashion lover’s wardrobe.

Let us explore the many variations of ‘50s skirts with a bit of social history mixed in.

The fuller the skirt, the better in the 1950s! With the aid of multiple layers of stiff petticoats and a possibly a hoop skirt, ’50s skirts were as voluminous as the wearer could make them. The skirt was often 4 or 5 yards of fabric draped using a few different techniques. These 1950s skirts usually started with a 3 inch wide waistband at just above the natural waist. The band fastened on the side or back with a zipper and button. 1958 plaid, floral, all over and border print skirts

In order to get the most fullness with the neatest gathers, the fabric of choice was cotton broadcloth in a range of pastel solid colors (pink, lavender, turquoise), all over prints, border prints or big plaids. These fun colors and prints made wearing them a joy.

The prints were quite unique with representations of travel, nature, atomic art, folk wear, western motifs, tribal themes, polka dots and so much more. To be really in fashion in winter, the skirt had to be made out of wool. Extremely heavy and difficult to keep full even with hoops AND petticoat underneath, they were only for the bravest of women or those willing to wear them without a stiff petticoat. Large box pleats helped create fulness without excess weight. The full skirt was popular because it was flattering. The fullness hid big hips and made waists look smaller. The fuller the skirt, the more magic it had on slimming waistlines.

Adding a wide cinch belt over the skirt band created an even more “wasp waist” look. Leather and plastic cinch belts were very popular, but they were prone to tearing and bunching up blouses. The elastic cinch belt was the best at both keeping blouses tucked and waists thin. Skinny belts were also worn with pencil and circle skirts. The belt loops sat in the middle of the waistband.

1950s skirts came in long or mid shin lengths. As the decade moved form the 1940s to the 1960s the hemline of skirts also moved up.  Midi length skirts were the most popular for lounging at home or in formal wear settings. The below knee length was the most common length for anything from housework to dancing. The 1950s circle skirt was the least bulky of the full skirts. The pattern was cut from one very large square piece in the shape of a doughnut. The inside circle was the waist measurement and the outside circle created the fullness. The skirts hang beautifully in drapes that swing with movement. You can understand why they were so popular with the teen dancing set. They are also very easy to make. While cotton and wool were used in circle skirts, wool felt was the best choice. It was thick yet light, which made it cover hoop skirt ridges easily. It also didn’t need hemming, since the edges never unraveled. Add some rick rack and the skirt was really styling!  In the age of “atomic” art, abstract designs circled the skirt hem such as these below. 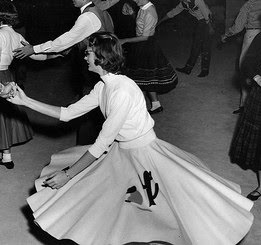 Dancing in a poodle skirt

The 1950s poodle skirt was a ‘50s favorite swing style with a poodle standing at the hem of the skirt, complete with a curly embroidered or sequin leash. Other decorations came in the form of the large applique cats, scotty dogs, butterflies, guitars, clowns, music notes, toys, or catchy phrases like “See You Later Alligator.” They were made of wool felt, just like circle skirts (because they were circle skirts.)   The poodle skirt became a lasting icon of the 1950s especially for girls and young teenagers, but women wore them, too, with more mature appliques such as the Eiffel tower, telephone, and martini pictured below. Poodle Skirts were not Just for Teens

Poodle skirts were paired with a sweater tops or button-down blouses, white bobby socks and saddle shoes- the same ionic look worn to Sock Hop dances. Learn more about the origins of the Poodle Skirt or shop poodle skirts here with even more poodle skirt history. Gathered skirts. A 1950s gathered skirt was made from a giant rectangular piece of fabric that was gathered in at a waistband so that it was fitted at the waist and full at the bottom. They were especially becoming on women without much natural hip since the bulky band gave instant curves. The shape rendered itself to be more A-line with the fullness at the hem instead of around the hip. 1956- A Gathered Skirt (left) creates fullness around the hip. A wide cinch belt brings in the waist. The Pleated Skirt on the right has less bulk at the hip but ample fullness at the hem.

Button up skirts were gathered skirt with a button front, similar to a shirtwaist dress, running down the center front. They were usually plain color with white buttons.

1957 playsuit skirt over a romper

Pleated skirts were also popular in the ‘50s, especially with Dior. They could be large pleats or tiny accordion ones, as long as there was plenty of fabric! Plaid was the most popular pint for a pleated skirt. Some were even reversible with two solid and plain on either side. Gored skirts featured panels of triangles sewn together with the points coming into the waistband, once again making the skirt much wider at the bottom. They were best when made with heavy fabric such as denim or wool.

Lastly, tiered skirts, made from layers of gathered fabric that got wider and wider towards the bottom, allowed for fullness and added a peasant flair to the look. Tiered skirts were usually gathered at the top, but had more flounce than a regular gathered skirt.

They were a style that came from the big trend for all things Western, Latin and folk art. 1940s had similar peasant skirts called Dirndl, inspired by German folk fashion. 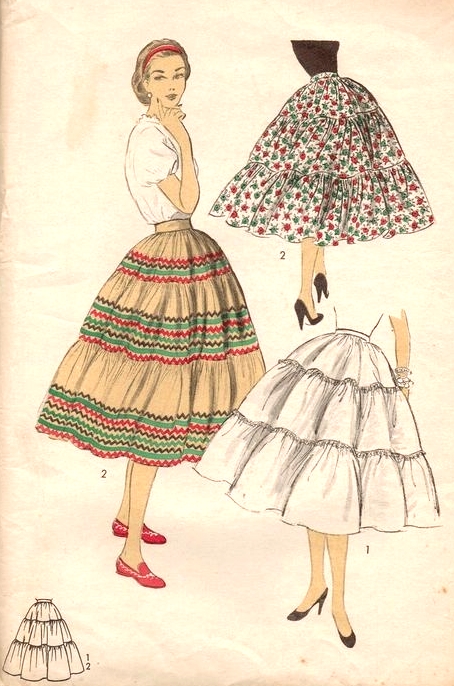 Within these basic circle skirt constructions are even more variations. This 1952 article in McCall’s magazine described the various skirt patterns they sold (from top left):

Gathered all around except a flat front panel, high rising with bracket-shaped pockets, slim with pleats to round the hips above the flapped pockets, with a waist-cincher over a four-gored skirt, work skirt wrapped and tied with accordion pockets, flat over hips with set in panels, and straight with arched pockets. 1950s fashion was a time of opposites and nothing makes that point as much as the drastic difference between full and sheath skirts. Fitted sheath skirts were called hobble or pencil skirts during the ‘50s because they were tight enough that they were difficult to walk in. For this same reason, pencil skirts also called wiggle skirts today, although the modern fit is snug to curves and the vintage 50s fit was straight from hip to knee.

Short pencil skirts that ended at the knee were a bit easier to walk in. Mid shin length skirts were harder but more common. Some had a back vent or kick-pleat up the thigh to allow for movement. Some longer skirts only had a decorative kick pleat that went up to the knee– a useless ornament. Sheath skirts started with a waistband at the natural waist and curved tightly over the hips and then tapered down the legs just below the knee or a bit longer. The straighter the fit, the better for most of the ’50s. The later part of the decade favored a rounded, fuller hip, that often required models to wear hip pads to achieve the perfect silhouette.

For women with naturally round hips, the sheath skirt was perfect. What was hidden in full skirts was revealed in pencil skirts. They were sexy, especially when they were worn with a pair of high heel pumps. Together they made a woman wiggle her walk, hence the common name now: wiggle skirts. 1959 Pencil Skirts in Solid and Plaid

Fitted 1950s skirts were usually plain colors or in a plaid or houndstooth pattern. They also sometimes had decorative buttons down the center or on one side or had large patch pockets on the front. They were a style of skirt for the mature women.

Teens were encouraged to stay clear of the sheath skirt– they were too sexy for “children.” Of course, teens didn’t pay attention to those rules and wore sheath skirts anyway. They felt so sophisticated in them. Pencil skirts were not very good for dancing, except while doing the twist. Latin inspired fringe skirts were a short lived fad. They were fun to dance in but impractical for most other occasions.

Another short lived variation of the of pencil skirt is what we call a mermaid or fishtail skirt. The bottom 1/3 featured a gathered ruffle or pleated hem. What to wear with a skirt?

Pairing the right 50s top with either a swing or pencil skirt is critical to creating the best outfit.  Some common tops were:

Learn about 1950s tops and 1950s blouses, shirts or sweaters

Shop these 1950s inspired full circle skirts and pencil skirts from multiple retailers online. Add a wide cinch belt to create that ideal 1950s wasp waist. Or if you prefer to make your own, there are some 1950s skirt patterns available, too.

We are Debbie and Oscar, your guides to dressing up like decades past. We are here to help you find clothing online and learn about vintage fashions as worn by everyday people, just like you. Need help with your outfit? Ask us anytime.
« Our Moulin Rouge Costumes
Downton Abbey Gift Ideas for Fans »