1960s mod fashion seemed to be divided into two parts: the elegant styles developed from the previous years of the 1950s, and the new modern styles popularized by the youth of the decade. Today, I am going to explore these popular styles of the 1960s and show you how to recreate the look with 60s mod style clothing available from online retailers today.

The ’60s saw a saturation of new styles, prints, colors and patterns being utilized and explored. The Pop Art movement was in full-swing, The Beatles were top of the charts on both sides of the Atlantic, and a new article of clothing was about to cause chaos – the mini skirt. Read more about 1960s fashion history for women here. Wonderful colors and patterns on these 1960s shift dresses The simplified cut of dresses with the new A-line silhouette proved the perfect backdrop for prints and patterns. The Op Art movement saw shapes of black and white contrasting to induce optical patterns, to trick and amuse the eye. Large circles, checks, and stripes began to adorn clothing in a kind of Zebra-like camouflage of modern times. For a bold 1960s inspired fashion look, team a dynamic pattern with matching black and white accessories. For a more subtle take on the style, look out for mod dresses with a hint of contrast and team with nude tights or colored accessories. Similarly, bright elaborate prints and patterns were emblazoned across mod dresses, shirts, blouses and skirts. Clothing was getting loud, and with its bold hues and patterns of dizzying combinations, it was difficult to ignore.

As skirts were getting shorter, women realized that the humble panty girdle and stockings simply would not be compatible. Instead, they turned to another form of hosiery – tights. As discussed in my lingerie article, tights were available in a wild array of colors, and even different prints and patterns. As young women sought to be fashionable, modern and ‘new,’ tights were an easy and relatively cheap way of updating a look. For example, a burgundy ensemble could one day be teamed with cream tights, the next contrasting emerald tights. 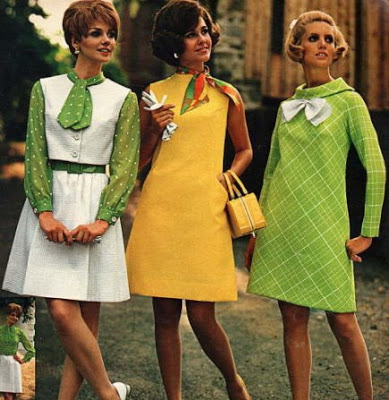 Bright tones and colors on these 1960s dresses

Today, we have a vast selection of hosiery to choose from, with deniers ranging from ‘barely there’ right up to completely opaque. Team a patterned dress with tights that highlight one of the colors in the pattern for a co-ordinated look. In the first half of the decade; the formal demure styles of the 1950s still held sway. Evening dresses were structured, often made of patterned cloth known as brocade – a weave which allowed a duo of colors to show through in various designs. Skirts gradually became more A-line rather than full circle, and the petticoat would eventually be discarded in order to fit in with the new silhouette. Look out for rich luxurious fabrics with an A-line silhouette for an early 1960s style. Shop 1960s cocktail party dresses.

Hats were indeed worn during the 1960s, but as hairstyles started to become more elaborate, the hat was slowly discarded in favor of showing off ones ‘do instead. Hair really was the crowning glory in the 1960s, with beehives reaching heights akin to those of the excessive Rococo era.

For an early 1960s evening style, look out for dresses of satin or brocade in rich shades. The waistline would be on the natural waist, or just below the bust – empire style. Dresses sometimes came with a waist sash or an overskirt in a sheath style.

As the decade progressed, hemlines rose as the silhouette loosened, becoming more akin to the A-line shift dress style. In the mid 1950s, for the first time since WWII, Chanel resumed production. The fashion house still focused on producing comfortable stylish clothing, thus the Chanel suit was born. Based on her earlier styles of the 1920s, the suit continued into popularity during the 1960s. With its loose but structured shape it was the perfect antidote to the babydoll dresses and pop art patterns of the era.

Today, a similar look can be achieved with the various sets of co-ordinates available – all inspired by the original Chanel suit. To enhance this 1960s inspired fashion style, wear with a string of pearls, opaque tights in a harmonizing shade, and flat pointed pumps. Pair neutral or pastel shades with matching accessories for a put together coordinated look of the early 60s. Shop vintage suits.

The impact of the teenager can be felt more than any other era during the 1960s. The term teenager was arguably first used in the late 1940s, and from then onward gained momentum through the 1950s up to the mid 1960s – when youth culture would pervade.

With the baby boom, a new generation of consumers was born. The teenagers of the 1960s were not constrained by the austerity restrictions of the previous decades, as such they desired to embrace the new mode of the times.

Clothing was more accessible than ever, with the advent of new man-made fibers producing affordable fashion for all. It seems that clothing became so affordable that a new ‘disposable’ attitude developed – to the extent that paper clothing was produced. Albeit a short lived craze, perhaps it demonstrated the attitudes of society to come. In addition to the short skirts and bold patterns of the decade, trouser suits were a popular choice of attire. The typical 1960s trouser was similar to the Capri pant of the 1950s, but became more tailored. Capri pants were still worn during the 1960s, but women also favored the straight leg cut of trouser. 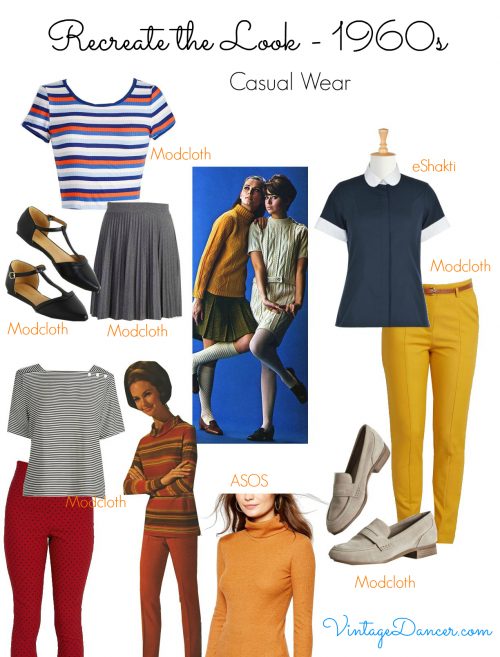 Casual styles to recreate a relaxed 1960s look with pants and simple tops.

For a perfect 1960s style, team straight leg trousers or Capri pants with a loose boxy top, perhaps nipping in the waist with a belt worn over the top. Finish the look with loafers or low pumps, colorful jewelry, and a bit of volume in the hair! 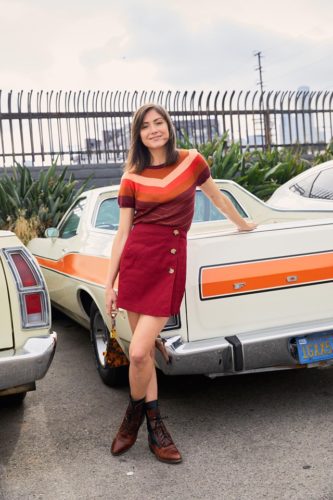 We are Debbie and Oscar, your guides to dressing up like decades past. We are here to help you find clothing online and learn about vintage fashions as worn by everyday people, just like you. Need help with your outfit? Ask us anytime.
« Stacy Adams Men’s Victorian Boots and Shoes
Modest, Mature, Mrs. Vintage Dresses – 20s, 30s, 40s, 50s, 60s »