– Long perfectly straight hair was desired by many teens and young women. Like Marsha Brady, hair was either straightened at the salon or literally ironed at home with a clothes iron. It was a risky process. The opposite of the stick straight hairstyle was the all natural curly Afro. Not just worn by African Americans, it too was favored by any women with fine, tight, curly hair. The natural look freed women from the expense of weekly professional hair straightening and styling.

Women of any hair type could let their hair be natural in the 70s. Wavy? Yes! Short and fine? Yes! Wash, air dry and be out the door. No one would think the wiser. Many women did not like the Afro. Instead, African American hair was straightened and styled into any of the other popular smooth looks such as the bob, the pageboy, wedge, or flip.

Not just an 80s fad, the mullet came in style in the 70s for women and men. Short, wide bangs with medium length hair only in the back created this iconic hairstyle.  It could be ugly, but at the time it seemed like an easy to care for and fashionable genderless look. The shag was a very popular messy hairstyle that featured all over layers of wavy or loose curly hair. A blow dryer (a recent invention) helped aid the layers in flipping outward adding to the volume. Shags could be short or long. Many women who cut their hair short in the 70s never went back to long hair in the decades to follow. Dorothy Hamill, figure skater, sported this boyish bowl cut where the bangs were cut at an angle for a slightly more feminine look. Her hair floated when she skated and many women immediately copied her effortless beauty. Janice in Three’s Company started off the series with a wedge cut in 1977. The bowl cut was similar to the wedge but longer. A bowl could be placed on the head and cut evenly around the edge to create this simple shape. The 1920s flapper bob came back in the 70s and stayed the entire decade. Short chin length straight hair and bangs were perfect for thin straight hair on a narrow face. Curly hair could also be bobbed, but was usually a bit longer and shaped into the bowl cut. The all-over short poodle cut was a favorite of curly haired mature women. Farrah Fawcett, every woman’s dream beauty icon, sported the new feathered 70s hairstyle. Also called the Farrah Flick or flip, it was a long and wide cut with layers that swept away from the face. It was lighter than the shag but still had plenty of bounce and fluff when running through the streets chasing bad guys in Charlie’s Angels.  A similar style by teen idol Marie Osmond featured long hair hot rolled into bouncy curls from the ears down. 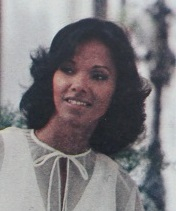 The pageboy was another medium straight hairstyle with ends rolled into the neck. It could also be chin length with a smooth bop, fluffed bangs, and curly tips. The late 1960s “flip” hairstyle carried over in the early 1970s blending with the new pageboy style. 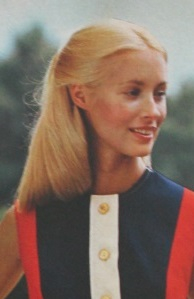 We are Debbie and Oscar, your guides to dressing up like decades past. We are here to help you find clothing online and learn about vintage fashions as worn by everyday people, just like you. Need help with your outfit? Ask us anytime.
« 1970s Makeup Guide and Beauty Products
1929 Fashion for Women and Men »