About this time every summer, I receive a handful of requests for men’s vintage boating outfits. Sometimes these requests come from antique wooden boat owners who want to dress the year that matches their boat, and other times they come from the general public planning to attend a vintage boat show. My local wooden boat show, the Lake Tahoe Concours d’Elegance, has been on my go-to list for years. Will I make it this year? I hope so.

Oscar and I naturally want to dress the part. For me, it is pretty easy to put on a sailor dress and call it a day. For Oscar, his outfit needs a bit more coordinating.  All of the following looks reflect the heritage of vintage clothing as worn by boating, sailing and cruising enthusiasts from the 1900s, 1910s, 1920s, 1930s, 1940s, 1950s and 1960s. What you choose to wear will depend on your the decade and how dressy or casual you want to be (and how much heat you can tolerate). The most iconic outfit was the navy blue blazer over white or ivory trousers and a captain’s cap. This was the upper-class or ivy league look from the Victorian era through at least the 1960s. Subtle changes over the decades reflect the cut of the trousers (narrow to wide) or the jacket (double breasted to single breasted). The dress shirt was usually white with a necktie or bowtie in red or blue patterns. In the late ’20s, some college men began to wear knit sweater shirts and polo shirts in white or with nautical stripes to make the look more casual. They also substituted the yacht cap for a straw boater / skimmer hat with college colors on the band.

Oxford shoes were usually white suede nubuck with two-tone Oxfords or black Oxfords adding to the mix. The important aspect of boating shoes was the use of rubber soles, which were less slippery on smooth boat decks. The yachting look was quoted in The Great Gatsby novel:

I began to walk about the room, examining various indefinite objects in the half darkness. A large photograph of an elderly man in yachting costume attracted me, hung on the wall over his desk.

“He’s dead now. He used to be my best friend years ago.”

There was a small picture of Gatsby, also in yachting costume, on the bureau — Gatsby with his head thrown back defiantly — taken apparently when he was about eighteen.

Wealthy men like Jay Gatsby wore it while sailing, yachting, and on cruises. You, too, can easily re-create this look for your boat, although most men will leave off the jacket unless it is for an indoor event with air conditioning. Another common summer look, especially for the upper classes, was the all-white outfit. A white, ivory, or very light grey linen, palm beach cloth, cotton blend, or flannel wool suit was worn with a light straw hat and a colorful tie (red, blue, or green). A leather belt instead of suspenders made the look more casual and sporty.

Variations on the all-white suit were plentiful. Mixing light-colored jackets and trousers became common in the 1930s onward. So was changing out dress shirts for polo shirts and white shoes for two-tone Oxfords. The white on white look could be made more a casual with a polo shirt instead of a dress shirt after 1930: The navy blue yachting jacket wasn’t the only signature jacket worn while boating. It was mostly an upper-class look for yachters, while young college kids and gentlemen’s sport clubs chose the striped boating jacket instead. Also called rowing jackets, they were the uniform of many team sports in the UK.

The look never quite caught on the USA, except at some Ivy League colleges. After disappearing for a few decades in the 1930s to the 1950s, the boating blazer came back in the 1960s. The mods loved reviving this look for everyday style. 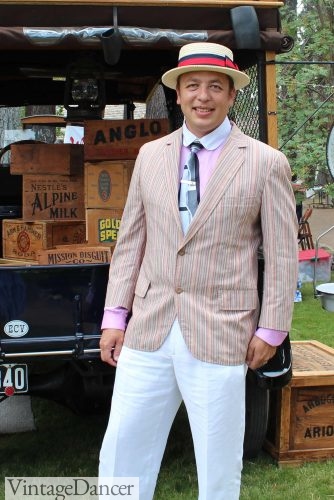 It is a great look for vintage boating events prior to the 1940s. All you need is a wide striped boating jacket/blazer/sporstcoat, a pair of white or ivory trousers, black or white Oxfords, and a straw boater hat. There were some variations of this as you can see below. Striped boating blazers went out of fashion by the 1930s because fashion was moving in a more casual direction. Instead, the striped T-shirt in the 1930s and 1940s became the new nautical look. The horizontal striped blue and white or red and white boat neck shirt was inspired by classic fisherman’s shirts. They made their way into mainstream summer fashion, especially while boating, sailing, and relaxing at the beach. Paired with white, tan, or blue wide leg pants or long shorts, the outfit is a popular one for vintage boat owners. From the 1940s onward, there was less and less of an actual boating outfit. Yachting men continued with traditional blazers for club events, but for active boating, the clothes were unremarkable. Shorts with t-shirts, polo shirts, or button down camp shirts and a baseball hat became the new look for weekend boaters.  With more boats coming in shiny new bright colors, outfits too entered into a world of happy colors. The following ads will give you some idea of what men wore while boating in the 1950s and 1960s. For your mid-century vintage outfit, you can choose men’s summer clothes that match the decade and your boat, if you wish. Lean towards red, white, blue, and yellow for nautical colors.

We are Debbie and Oscar, your guides to dressing up like decades past. We are here to help you find clothing online and learn about vintage fashions as worn by everyday people, just like you. Need help with your outfit? Ask us anytime.
« Vintage Vacation Outfit Ideas | Retro Holiday
1920s Women’s Fashion & Clothing Trends »