As the weather begins to warm-up, we begin thinking about outdoor leisure activities – swimming perhaps being one of them. Here, I shall showcase some fabulous vintage style swimwear available today, and talk about the styles worn by the women of times past.

From Victorian bathers in their numerous layers of fabric to the ‘Itsy Bitsy Teenie Weeny Yellow Polka Dot Bikini,’ swimwear for women has come a long way.

Until the mid 1800s, the activity of swimming was primarily reserved for men, who were unrestricted by their attire and thereby could swim through the water freely. Women were expected to ‘bathe’ in the waters rather than actually swim, a notion which was re-enforced through the choice of swimwear at the time.

Clothed in numerous layers – even including stockings and sometimes swimming corsets – women’s attire simply did not address the concept of physical activity. A key factor in the evolution of women’s swimwear is the question of modesty. At the turn of the century; women used bathing machines in which to change into their bathing attire, and then were wheeled to the water’s edge, free from the gaze of curious eyes.

We must understand that swimwear had a number of essential requirements that needed to be filled. It must:

At the beginning of the evolution of swimwear for women, only two of these points were addressed – to cover the body and protect ones modesty. Of course, if a woman wanted to actually swim in her bathing suit, some changes would have to be made.

Early bathing suits were made from woollen fibres as it was thought that wool shed water faster than other materials. Cotton would soak up water and cause the suit to drag and stretch – definitely not protecting the wearer’s modesty!

Attempts had been made in the 1800s to incorporate fashionable details of the time into the bathing costumes, but it wasn’t until the 1920s that fashion really started to have an impact on swimwear. 1920s swimsuits were made of knitted wool that stretched onto the wearer’s body. These were certainly an improvement upon the Victorian bathing suits, and at this time more of the body was revealed by the suit.  In the middle of the decade, Chanel designed costumes for Diaghilev’s ballet ‘Le Train Bleu,’ featuring swimsuit ‘maillot’ costumes. The ballet has a strong sporting theme, re-enforcing the popularity of leisure time in the early decades of the 20th century.

Much of leisure time grew in popularity, as did the demand for suitable attire and a ‘healthy glow.’ The suntan was incredibly popular in the 1920s and 1930s as it represented wealth, luxury, and – ironically – health. Of course today we know the importance of sunscreen, and the sun kissed golden glow is imitated through pigmented beauty products. With this new trend for the suntan came a need for swimwear to be more revealing – but of course, that still retained and complied with the modesty standards of the time. In the 1930s, innovations in technology meant that swimwear could finally become more streamlined, fitting and stretching onto the body in ways knitted wool could not. Lastex was an elastic thread coated with cotton or rayon, providing stretch and a good recovery – maintaining its original shape. Finally, a fiber that was conducive to swimming! A selection of swimsuits available from Unique Vintage, many in plus sizes.

Designers were also recognizing the desire to look ‘one’s best’ whilst in swimming attire, and started to include built-in structure. Internal support ensured the bust was not flattened by the stretch fibers, and echoed the popular silhouette of the time. As swimwear was being worn more freely, it needed to make the wearer feel good – and look fashionable.

Gone were the days of women being wheeled to the water, concealed in a bathing machine. Now, women were wearing their swimsuits freely to sunbathe in, and of course to swim. Read more about 1930s swimsuits.

During the 1940s, fabric restrictions meant that swimwear designers had to devise clever solutions in order to continue producing desirable swimwear. Restrictions meant that they now had to use 10% less fabric in their designs than previously, leading to cut-out details and, ultimately, the two-piece. The bottoms sat high on the waist, covering the navel and most of the midriff.

The top usually had built in structure and provided full coverage. A selection of vintage inspired two-pieces available at Modcloth

The two-piece was basically the swimsuit but with a slither of fabric absent at the middle – adhering to the 10% less fabric rule. Also during the 1940s, another kind of two-piece exploded onto the scene – the bikini. Devised by Louis Reard and Jacques Heim, it featured mere triangles of fabric, leaving the navel exposed (although Heim’s version kept the navel covered). The important differences between the classic two-piece and the bikini is that the bikini strived to use as little fabric as possible, with scant triangles of fabric covering the body.

As innovative and explosive as the bikini may have been, the general public was not quite ready for such a revealing style. It wasn’t until the 1960s that the bikini began to be worn and popularised by movie stars of the time. Hollywood had an undeniable influence on women’s fashion choices, and swimwear was no different. Esther Williams wearing a two-piece which fastens at the waist

Perhaps some of the most memorable moments of swimwear on screen are Marilyn Monroe in Gentlemen Prefer Blondes and Esther Williams in the late 1940s and early 1950s. 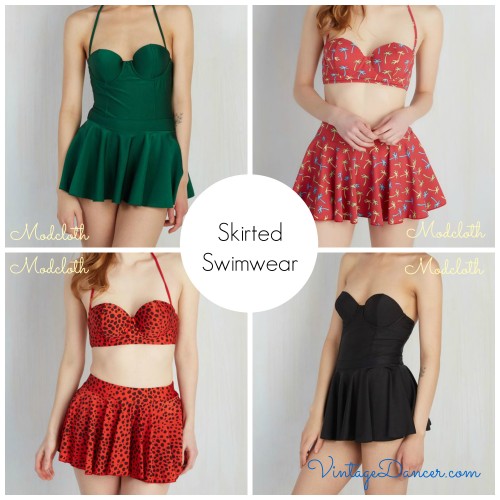 Versatile skirted swimwear from Modcloth. To be worn over swimming bottoms, giving a feminine look

In 1943, Betty Grable posed for photographer Frank Powolny to create publicity shots for the film Sweet Rosie O’Grady. One of the images showed Betty with her back to the camera, smiling coyly over her shoulder in a white swimsuit. Fox Studios gave permission for the image to be distributed to American GI’s – subsequently, it became the most popular pin-up of WWII. The popular Betty Grable shot, which has now become iconic

It wasn’t just Hollywood that was popularising swimwear – beauty pageants impacted on swimwear enormously. Beauty pageants began at the turn of the century in America, but became increasingly popular in the post-war years of the 1940s and 1950s. These swim sets from Unique Vintage would be perfect for parading in!

In Britain, practically every seaside resort had annual pageants – featuring contestants in their swimwear. By this time, swimwear truly was an item to be admired — and to be admired in. As previously mentioned, from the 1930s onwards, swimwear featured internal structure and support, moulding, and shaping the body, perfecting that beauty queen figure. How cute is this vintage inspired polka dot two-piece by Unique Vintage?

Today, we can have the best of both worlds – swimwear fibers and fabrics retain elasticity, repel water, and preserve modesty, all while looking good. We can choose from a myriad of designs, some for sunbathing (with sufficient sunscreen liberally applied), others for swimming, and some for simply paddling in.

The brave of us can don a bikini, or we can mix and match with separate top and bottom options. The options and possibilities are endless!

We are Debbie and Oscar, your guides to dressing up like decades past. We are here to help you find clothing online and learn about vintage fashions as worn by everyday people, just like you. Need help with your outfit? Ask us anytime.
« 1940s Outfit Ideas: Recreate the 40s Look
1950s Inspired Fashion: Recreate the Look »