Continuing with our Recreate the Look series, in this post I will show you how to recreate a 1940s outfit with clothing available from the retailers of today.

When thinking of the 1940s as a time period, the words practicality, functionality, and rebirth spring to mind. Even though the War officially ended in 1945, the shadow of WWII was to cast itself across much of the decade. In Britain, food rationing began in 1940, followed by clothes rationing the next year. 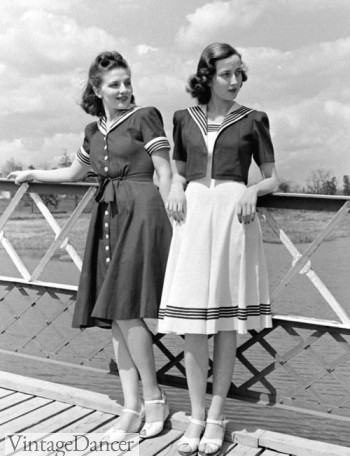 In Britain, the Utility Scheme was founded in 1941 – hence the 41 in the recognizable CC41 label. The Utility Scheme, although operating in the same time period as rationing, was a different arrangement. Clothes rationing required both coupons and money in order to purchase an item, thereby pooling the favor towards the wealthy. The Government recognized this inequality, and set up the Directorate of Civilian Clothing to seek a solution – which was known as the Utility Scheme.

The aim of the Utility Scheme was to produce everyday clothing in good quality materials at affordable prices. Similarly, in America, the War Production Board issued guidelines and restrictions of clothing known as L-85 in 1942.

During these austere times, people still wanted to look their best. Women were even encouraged to pay attention to their appearance, applying red lipstick and setting their hair in pin curls to boost general morale.

As women started to find themselves in new job roles and settings, their wardrobe was affected in turn. Pants or trousers started to become more widely accepted, and were now worn on a daily basis rather than just on the beach or boardwalk. Priscilla Lane wearing her pants with a floral printed blouse

Admittedly, the ethos was still ‘if in doubt, wear a skirt,’ but the wheels of change were turning, and so were the attitudes to clothing. Perfect trousers paired with a blouse or sweater and fitted jacket for a 1940s style style. Shoes could be heels or flats for s formal or sporty look. You can sew a pair of 1940s pants too

Women’s trousers in the 1940s were wide legged (although definitely not as wide as the beach pyjama hems of the previous decade) with a low rise. They sat on the natural waist and skimmed over the hips to flow to the floor. Wear with short sweaters and modest blouses, and add a plaid jacket for warmth. For shoes, choose a flat brogue (Oxford) for practicality, or an Oxford/brogue with a small heel for a hint of femininity. The acceptance of trousers was also due to the necessity for women to have something warm and practical to wear in the event of an air raid. Enter the Siren Suit. Similar to a loose jumpsuit, it was named so because it would be donned in haste as the sirens sounded the alarm of an air raid. Designed in 1939, the suit would be loose fitting – in order for it to fit over a nightgown in the event of needing to wear it in the middle of the night.

It would have large pockets, as it was simply too impractical for a woman to rush out of the house with a handbag, so it was hoped that the pockets would be sufficient to hold the essentials instead. It was usually hooded in order to keep the head and neck warm. As Siren Suits cost 11 coupons, (with annual allowances for a woman being between 52 at their highest, and a mere 41 in 1945) the less costly option of trousers was usually preferred. Dungarees and Siren Suits for a 1940s look

Along with Siren Suits, women also donned another version of an all-in-one, dungarees. Worn during the previous decade as leisurewear, they were now being worn out of necessity. Women were now working in various roles, some in factories, others in the Women’s Land Army. Both roles required hardy work-wear to be worn, hence overalls and dungarees. Shop 1940s style pants and overalls here. For a 1940s look, wear dungarees with a short sleeved blouse or sweater underneath, and accessorize with a patterned scarf. Dresses accessorized with hats and gloves to embody a 1940s style

Even though times were austere, women’s dresses still retained a beautiful level of femininity. Hemlines hit on the knee or just below, with designers adding subtly decorative details for interest.

Bodices featured shirring and gathers, whilst skirts were mostly a slight A-line in silhouette in order to preserve fabric. Shop here in the UK and here for mostly USA. Look out for dresses with knee length hems and gently flared skirts for a 1940s look. Pair with heels, gloves, seamed stockings and sun hats for a complete summer look.

While hats were not rationed, they did carry a 33% tax rate as they were considered a luxury purchase. Many women favored snoods, turbans, or ‘toy’ hats (miniature versions of men’s hats) during the war years. After the war, hats started to become larger and more flamboyant. When an occasion called for smartness, but without the femininity of a dress, separates were the perfect answer. Arguably more versatile than a dress, separates could be worn in a number of combinations and styles, creating a different overall look each time. Skirts were always worn on the waist, with the blouse tucked-in to create a smooth silhouette. Channel your inner Agent Carter with these smart separates: blouse and skirt

As with dresses, the hemline usually hit on the knee or just below. During the war years, women mostly wore A-line skirts, but skirts started to become fuller as clothes rationing and austerity came to a close towards the end of the decade.

With Dior debuting his ‘New Look’ in 1947, it was a fashion rebirth. There were certainly no signs of austerity in his billowing skirts containing countless yards of fabric. Dior’s ‘New Look’ marked a defiant end to the years of rationing and frugality, however it would not be until the next decade that fashion – and the women of the time – fully embraced his vision.

Team an A-line skirt with a smart blouse for a formal look, or for a more relaxed look, opt for a sweater instead of a blouse. Finish the look with seamed stockings and wedge heels. As the decade was coming to a close, casual wear and leisurewear once again started to become popular. America was leading the way in this field, with Californian designers producing covetable leisurewear for everyday casual style. Playsuits were popular, as were shorts, pedal pushers, and cotton shirt dresses. This was clothing for a nation reclaiming the normality and gaiety of their lives pre-war years.

Team high-waisted shorts with stripes for a nautical take on the style, and finish the look with wedges and sunglasses. Don’t forget that sewing your own 1940s clothing is great option. We are Debbie and Oscar, your guides to dressing up like decades past. We are here to help you find clothing online and learn about vintage fashions as worn by everyday people, just like you. Need help with your outfit? Ask us anytime.
« 1930s Swimsuits- Ladies’ Bathing Suits History
Vintage Style Swimwear in Fashion Today »