Men’s vintage jewelry is perhaps a little overlooked in comparison to jewelry worn by ladies. To rectify this, we thought it would be fun to look at the history of men’s vintage jewelry from our favorite period, the 1900s to the 1960s. Care to join us? Splendid.

As we previously explored in our piece on 1900s men’s clothing costume and workwear ideas, a typical nineteenth century gentleman was keen to appear proper and prosperous, but in a conservative way. Of course, jewelry helped to project this image. 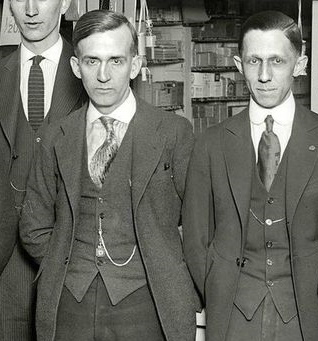 A gentleman in the 1900s would of course wear a sturdy pocket watch, attached to a chain and fob. Cuff links would also be worn and be in a simple style rather than anything too fancy. For formal day wear, a stickpin was a necessity to keep one’s ascot firmly in place. This would usually be made out of gold, although mother of pearl was another favorite. Both round and pear shapes were featured in men’s fashion magazines. Figures of  a dog head and horse were worn in the country. 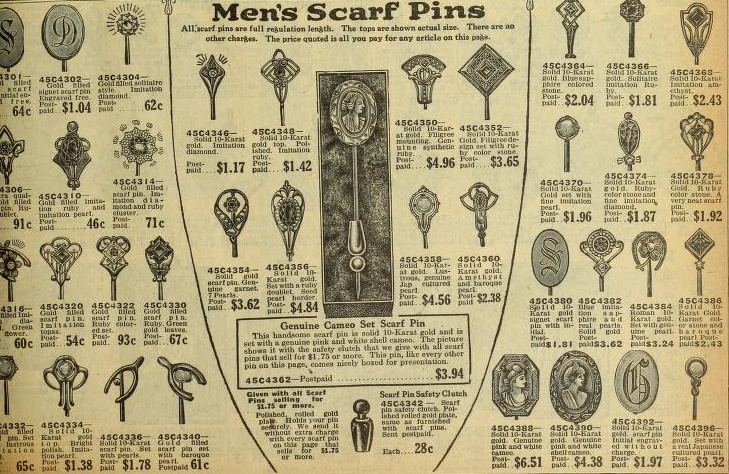 As the day moved into evening, a gentleman would dress for dinner or for entertainment at the theater or a friend’s home. A white dress shirt would of course need shirt studs, and it would only be correct to wear matching cuff links. They were oval shaped in gold and frequently monogramed. Very well-to-do gentlemen would occasionally be a little more lavish in the evening, opting for shirt studs made from a precious stone such as small diamonds or sometimes a single sapphire. Usually, though, mother of pearl was the preferred option for shirt studs and cuff links.

As the tailcoat started to be shunned in favor of a tuxedo, darker shirt studs were worn. Following the end of World War One, servicemen returned home with a fondness for the wristwatch, beginning the slow decline of the faithful pocket watch. For those with an interest in watches, do read our history of men’s watches, too.

It was at this point that for the first time, men’s jewelry was beginning to outsell women’s jewelry.

As menswear continued to develop, one development which had a knock-on effect for men’s jewelry was young men shunning stiff collars in favor of the soft shirt collar. This stylistic shift resulted in the collar button, once such as essential item, becoming redundant. Collar buttons were big business for jewelry manufactures, with 1.5 million of the things sold in 1901 by just one of the leading producers.

Jewelers had no reason to mop any sweat from their foreheads, though, as a new item became an important part of every sartorially savvy young man’s box of trinkets – collar pins. 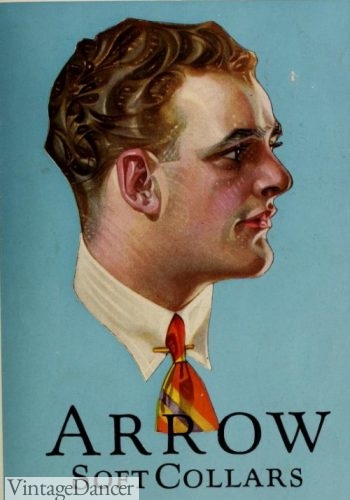 See the gold collar bar under the tie?

Collar pins, made from gold or silver, were introduced in 1921. The purpose of the collar pin was to hold the collar in place without causing any unnecessary damage. ” They jabbed necks and fingers. They were merely glorified safety pins.” –  A. Flusser. 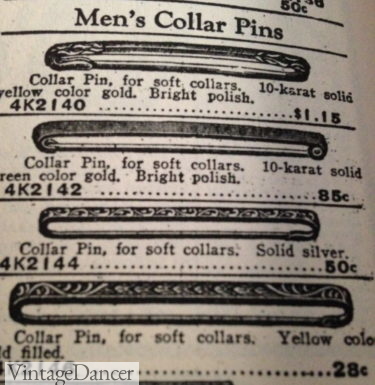 If you’re keen to look as dapper as Nucky Thompson from Boardwalk Empire, collar pins are still available, both in new or vintage condition.

Spread or cutaway collared shirts just won’t work, though. You’ll need a longer collar shape with a narrow gap in the middle, such as a spearpoint collared shirt, or experiment with detachable collars.

Tie clasps also became popular in the early 1920s, helping to keep the tie in place from a sudden gust of wind. Having suffered the embarrassment in my younger years of walking around with a tie on my shoulder, I can understand why tie clasps are so important.

Besides an outdated watch chain men’s 1920s jewelry promoted the belt chain. At the end of the chain was a house key, pocket knife, nail file, hair comb or cigarette lighter which were also elaborately decorated and monogrammed. One of the big developments during the 1930s was novelty jewelry. This included combination sets for sportswear, which was undoubtedly a result of the 1932 Olympic Games in Los Angeles. The Olympic Games made Americans more sports crazy than ever, so naturally, men were suddenly keen to show their passion for sports on their person. Soon, cuff links, tie clasps and scarf pins were being sold in combination sets, carrying sporting motifs. It didn’t just stop there with sports though, as other interests also made it onto jewelry, including dogs’ and horses’ heads.

Another change worth noting was the introduction of colored stones as part of evening wear attire. This started in 1931, particularly in evidence in cuff links. Blues, reds and greens were the popular color choices. Of course, not every man could afford sapphires, rubies and emeralds, so plain glass and synthetic stones were acquired. As we reached the middle of the 1930s, and despite the Great Depression following the 1929 Wall Street Crash, it was expected that every well-dressed gentleman had jewelry for day, evening, sports, business, and more informal wear.

The key chain, which had been worn on tailcoats in the 1920s was now being quite a fashion statement on the ’30s. Another item that continued to rise in popularity was the tie clasp, which began to evolve into many different variations. One such example was a chain tie holder. The clip part kept the shirt in place like an ordinary tie clasp, while the chain part helped offer some extra security, while adding an extra touch of flair. 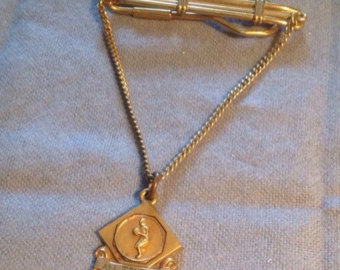 One of the major accessories to emerge in the 1930s was the collar bar. Descending from the previous decade’s collar pin, it featured a clamp on each end which attached to collar points. This pushed the knot of the tie forward, almost framing it like a painting. As an alternative to wearing your pocket watch on a chain, fastened to your vest, a leather lapel cord was produced in the mid-30s. One end was secured to the buttonhole of your jacket, while the other end was attached to a pocket watch, which sat in the breast pocket of your jacket. I have one of these lapel cords myself, which adds a fun sartorial touch to an outfit. Particularly when paired with a nice tweed blazer.

Like men’s fashion, World War Two had a strong influence on jewelry after the Allies had won and men returned home.

Identification bracelets in silver or gold became popular, especially on a chunky chain. The curved plate identified the wearer’s name or initials.

The Bold Look emerged in 1948, led by Esquire magazine. Everything about the Bold Look was big and stood out. Naturally, this resulted in jewelry increasing in size and heft, with cuff links much chunkier and a thick gold tie clasp that “holds its own” against a loud tie.

A year later, a new metallic color of jewelry was heavily promoted called palladium. It’s use was relatively short-lived though, with large amounts of palladium jewelry from the 1940s and ’50s dismantled and sent to refineries. 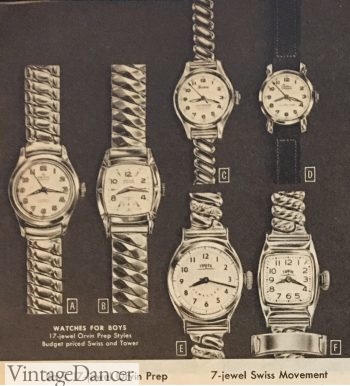 As we explained in our 1950s menswear outfit ideas article, men’s clothing was very conservative in the early fifties. As skinny ties became fashionable, a trend which continued into the 1960s, tie bars shrunk in length as a result. Despite the conservative choice of dress for the average American man, thankfully, color was not missing from jewelry with stones, ceramics and different colored enamels all used. Following World War Two, men’s wristwatches were now the preferred timepiece rather than the antiquated pocket watch. This was a result of vests no longer being worn quite as much and as military veterans that had seen the benefits of wristwatches while they were on active service. Another major change in jewelry attributed to World War Two was the revival for men deciding to wear wedding rings. It is believed that men wanted something to remind them of their wives and family back home. Before the war, only a small amount of weddings were performed in a double-ring ceremony but by the 1950s, almost 90 per cent of American men were exchanging rings at the altar.

This custom largely remains unchanged to the present day, although there are still some men who shun the wedding band. One example is Prince William who decided against a wedding ring as he’s not overly keen on jewelry. Meanwhile, his father the Prince of Wales wears a wedding ring, but stacked on his little finger with his signet ring. The great thing about men’s jewelry is that it is still very widely available. Vintage cuff links, pocket watches, collar bars, tie clasps, and rings can be acquired from the usual places (etsy.com and ebay.com) and are a lovely way to add a little personality to your look. For newer stock, look at cufflinks.com or Brooks Brothers. Even Amazon has some cheap collar bars and pins. As far as men’s jewelry is concerned, I tend to believe that less is best. There’s something very ostentatious about a man dripping with rings, chains, bracelets, and watches. Whereas I often veer towards a little flamboyant style of dressing, I much prefer to be understated when it comes to jewelry. Roosevelt in 1906 wearing a signet ring

Known as a ‘gentleman’s ring’, signet rings have a fascinating history, dating all the way back to ancient Egypt. If you watch a classic film from the Golden Age, you will often spot actors wearing a gold ring on their little finger. Indeed, there are a number of famous signet ring wearers including President Roosevelt (pictured wearing one above in 1906). Often engraved with a family crest, they were once used for making wax seals on important correspondence. My personal signet ring is engraved with my monogram. We are Debbie and Oscar, your guides to dressing up like decades past. We are here to help you find clothing online and learn about vintage fashions as worn by everyday people, just like you. Need help with your outfit? Ask us anytime.
« 1940s Men’s Work Clothes
Tea Party Hats | How to Make a Victorian Hat »