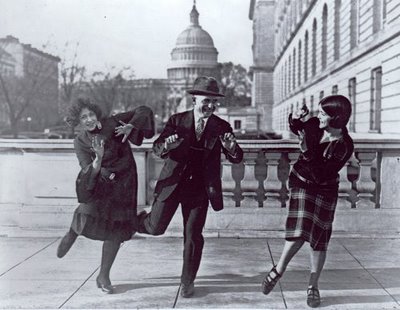 Dancing and Fashion! Ahhh, now we get into what got me interested in vintage fashion in the first place (You can read my story here).

The roaring ’20s dances were wild and carefree. Previously, ballroom dancing, although silly with “animal dances,” was structured and tame compared to the independent “Charleston,” “Black Bottom,” and “Shimmy” dances that took over dance floors in the roaring ’20s. Ballroom dancing continued with older and more conservative folks well into the ’30s. The new dance crazes were for the new women and men who valued extreme sports, frivolity and looser morals. Most dancing took place in nightclubs and community centers. The latter promoted marathon dancing, which at first was about who was the best dancer and later became about who could last the longest on the dance floor (not necessarily dancing, but upright). Marathon records were broken over and over again across the country: 7 hours, 20 hours, 3 days, a week. If you didn’t win the marathon, you could at least bet on the winner and thus be a winner yourself. In the nightclubs, dancing was often mixed with illegal alcohol (or after hours sales in Britain) and in the shadiest clubs, prostitution. F. Scott Fitzgerald describes Gatsby’s parties as one big drunken dance party. Women who frequented clubs and parties like these were known as “good time girls.” Party goers would travel from one club to the next, avoiding police raids. Dancing the latest crazes was passed on from one dancer to the next. It was in dance halls across the country that free form social dancing had its beginnings. No teachers taught the Charleston — it was something you just picked up from watching movies like Running Wild, and from your fellow dancing friends. Social Dances of the Roaring 20s

The following was written by Richard Powers, a Social Dance historian, and my first vintage dance teacher. Used with his permission (Thanks Richard!) Vern and Irene Castle dancing dancing the Stomp around 1919

Within weeks of the Armistice, both Europeans and Americans were dancing again with renewed enthusiasm.  In Paris, the wartime ban on public dancing was still in effect at the end of 1918, but that didn’t stop the French from dancing.  Many balls were given by the various regiments, with even more “private” tea dances held by the numerous dance teachers.  By 1919, dancing in Paris had fully returned to its pre-war frenzy.  The Dancing Times reported that Parisians “apparently cannot take a meal or watch a play through without breaking off for a round or two of dancing.” On the dance floor, the Grizzly Bear, Turkey Trot and One-Step weren’t merely ten years old; they were from an entire era ago — before the war, and thus were out of fashion.  The newer Fox-Trot had never caught on, having been introduced only months before the war started, so the Fox-Trot escaped the pre-war stigma and became the favorite dance of 1920.  But most dancers still loved the simplicity of the One-Step.  In other words, they liked the dance but not the old-fashioned name, so many continued to dance the One-Step but called it the fashionable new name, Fox-Trot, much to the annoyance of dance teachers.  Music publishers confused the issue further by publishing one-steps, true foxtrots and even tangos as “Fox-Trots” in order to sell more copies. Early versions of the Charleston had been staged in small theatrical productions but it became the new dance hit of the Twenties when it accompanied James P. Johnson’s song “The Charleston” in the 1923 Broadway musical Runnin’ Wild.  The variety of Charleston variations exploded with the advent of Charleston contests, for both solo dancers and couples.  Then as the Charleston craze began to fade, anxious dance teachers hoped a new fad would revive their business, and thus embraced the newer Black Bottom.  But there was more promotional publicity from the effort than actual social dancing of the Black Bottom. The African American Texas Tommy had traveled from San Francisco to New York City in 1911.  Harlem dancers kept the essential concept of the Texas Tommy – a turning Two-Step with swingouts releasing the woman to a single handhold – and simplified the footwork from three different steps to just one.  It was renamed Lindy Hop by “Shorty” George Snowden in 1928, and it was soon captured on film when Snowden, his fellow Savoy Ballroom dancers and Chick Webb’s band performed it for the 1929 sound film After Seben.  Harlem’s Savoy Ballroom was integrated throughout its reign, passing the Lindy Hop on to both black and white dancers, but the Lindy Hop didn’t become widespread until the 1930s. Other dances in the 1920s:  Waltz and tango continued, with slow waltz becoming a new trend, and exhibition tango adopting a more “gaucho” style under the influence of Rudolph Valentino.  The Foxtrot became smoother than the trotted ragtime version, or could be bounced even more vigorously, becoming the Toddle.  The Brazilian Samba was introduced in Paris in 1922, then spread.  Blues expanded from a side note in 1912 to a major influence in American music during the twenties. The Wall Street Crash of 1929 ended the Jazz Age, as The Great Depression set in.  Dancing continued, with notable inspirations on the Silver Screen.  Dance marathons, continuing from the 1920s, now became a hopeful step up for financially struggling dancers in the early 1930s.  Then by 1936, dancers were ready to cut loose again, with the new hits of the Shag, Big Apple and the late blossoming of Lindy Hop and jitterbug. The loose, short, swishing charleston dresses of the roaring twenties and men’s softer, sportier, clothing made them ideal dance clothing. For women, the first thing that had to go was the corset or tight fitting girdle. The item that made your figure flat and boyish was too restrictive to dancing close with your partner. One young flapper reported, “the men won’t dance with you if you wear a corset.”

Corset check rooms became common in the early ’20s, where young women would discard their corsets before hitting the dance floor and wear them home again to appease their families. Dresses became shorter on the dance floor. Exposing more knee, leg and thigh! Oh my! The handkerchief hem (uneven hemline) dress of the mid ’20s was especially common as a dance dress. The hem was not constricting like its longer, straighter cousins, and the layers allowed the dress to look long while standing but fly free while girls shimmied. Unlike dresses, dance shoes grew taller. Short Cuban heels were for day wear but at night higher thinner heels showed off exposed legs. Dance shoes were usually strapped called “Flapper Shoes” or “Sally Shoes.” Single Mary Jane Straps or T-straps were the most common with varying degrees of cutouts and sparkling trims in accordance with the trends of the year. 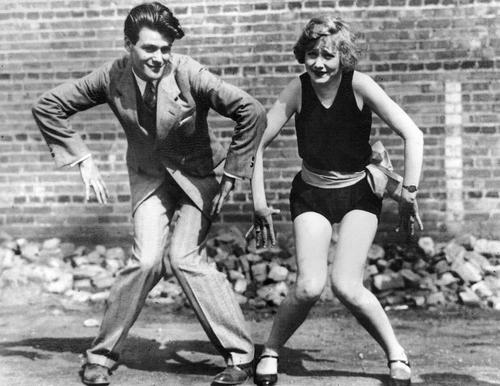 For the men, no special dancing clothes were required. The youthful trend for casual sporting shirts and suits were worn with the less formal community dances. After six dinner and dance events may have required a tuxedo or dinner jacket to be worn. Suit jackets were almost always left on for dancing. Hot to wear, but it kept in sweat and manly musk off the hands of your partner (which she appreciated very much!). Men’s dance shoes, if he opted for special ones, had leather soles. The new trend for rubber sole shoes was great for day wear but too sticky on the dance floor. Most men’s formal patent leather shoes came with leather soles. The only exception was if you were dancing on a yacht or river cruise– rubber soles were needed to help you stay in place over potentially rough waters. Where to Learn Vintage 1920s Dancing?

I often get asked where you can learn to vintage dance. The tricky part about 1920s dances is that they have not caught on to the “main stream” social dance revival like ’40s era swing dancing or the ’70s hustle. I have only dabbled a bit with the Charleston during Vintage Dance Workshops. My friend had a lot of success in learning from videos on YouTube. The nice thing about the Charleston is that it was a solo dance before a partner dance, so no need to drag your partner kicking and screaming to the dance floor.

If you have a local Art Deco society, you might be able to find some dance instruction with one of their members. Swing dance groups may also teach the Charleston or Shimmy. Your local American Ballroom dance school is unlikely to know any vintage dances but it doesn’t hurt to ask.

We are Debbie and Oscar, your guides to dressing up like decades past. We are here to help you find clothing online and learn about vintage fashions as worn by everyday people, just like you. Need help with your outfit? Ask us anytime.
« Gents & Dames: Leigh’s 1922 Pictograf Tea Dress
What Clothing Cost in the 1920s for Women »