Where the name 1920s “flapper” comes from is not exactly clear. Some claim it has to do with the “flap flap” sound young girls’ open galoshes made when they walked.  Another theory is that flapper dates back from before World War I, when it originally meant prostitute but came to refer to any woman with a boyish figure. Yet another theory is they these young women were “little birds” learning to take flight and flap their wings. Wherever the term came from, the 1920s flapper and her unmistakable outfit — short drop-waist dresses, bobbed hair, heavy makeup, and (shocking!) rolled down stockings — is a critical part of 1920s history.

Who were these flapper girls wearing such scandalous fashions? Read on. The flapper came in many forms: semi-flapper, the flapper, and the superflapper. Semi-flappers admired the style and freedoms of real flappers but still maintained values and conservative tastes when it came to pastimes such as drinking and sex. Ellen Welles Page wrote in 1922, “…some of the most thoroughbred superflappers might blush to claim sistership or even remote relationship with such as I. I don’t use rouge, or lipstick, or pluck my eyebrows. I don’t smoke (I’ve tried it, and don’t like it), or drink, or tell ‘peppy stories’ I don’t pet.” (Source) By the end of the 1920s, most women all of all ages would fit the “semi-flapper” label. The genuine flapper was typically part of the college scene. Young and intelligent, she dressed in the latest fashions, rode in fast cars with men, lived in the city, and watched all the latest movies. The Duncan Sisters, American vaudeville duo who became popular in the 1920s with their act Topsy and Eva. The superflapper was the extreme woman of the ’20s. Her morals were as loose as her clothes. She made regular appearances in F. Scott Fitzgerald’s novels and essays. In fact, Fitzgerald declared that his wife, Zelda, was the “first American flapper.” The superflapper lived her life moving from one party to the next, dating one man after the other, and spending money as quickly as she acquired it. She was either envied or scorned by public opinion. Flappers were not just white. Any young woman in the 20s who dressed well, danced and enjoyed life was a “flapper.”

The degrees of flapperdom were as varied as the women themselves. They were primarily in the city, but with the widespread distribution of magazines, advertising, and mail order catalogs, the flapper fad spread to some of the most remote parts of the country. Young girls not even in their teens yet begged parents to buy, instead of make, their clothes. One outfit would not do. They needed new clothes for every day, every season. They bobbed their hair with or without their parents’ permission. They spent more time with their friends going to movies and reading magazines than they spent at home with their family. Flappers dressed up for a night on the town If they did not wear the latest fashions, they were sure to come home in tears because they could not “fit in” with their friends anymore. The most popular girls knew how to roll down their stockings, dance the Black Bottom, and use all of the new lingo that trendy youth spoke. Sounds a lot like teenagers today, doesn’t it? They were and still are young “flappers” trying to leave the nest to discover who they are apart from their parents. 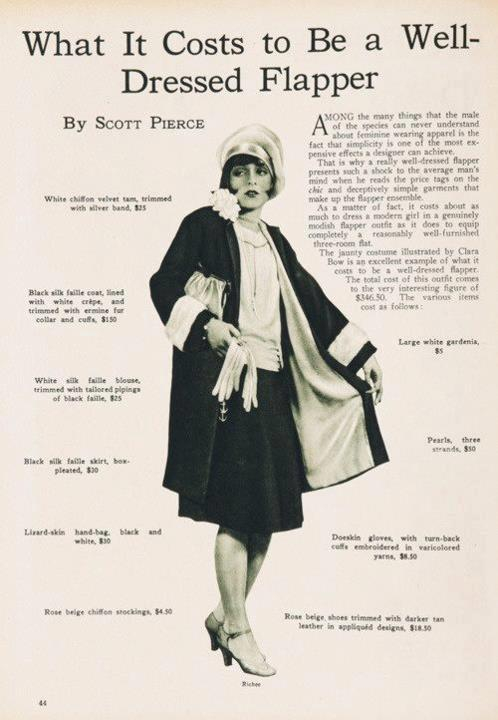 Transform yourself into a Charleston dancing bright young thing with a complete flapper style dress. Read how to dress like a 1920s flapper. FLAPPER – A wonderful look at the life of flappers. Who they were, what they stood for and how they dressed. Highly recommended.

From Flappers to Flivvers – This book is a collection of personal memories from young men and women who lived in the 1920s. Includes recollections on clothing, movies, radio, cars, music and dance. More insightful than any general history book. I learn something new every time I read it.

We are Debbie and Oscar, your guides to dressing up like decades past. We are here to help you find clothing online and learn about vintage fashions as worn by everyday people, just like you. Need help with your outfit? Ask us anytime.
« Great Gatsby Movie Dresses- Are they really 1920s?
1920s Plus Size Fashion in the Jazz Age »