Ah, The Great Gatsby. Back in 1974 it was Robert Redford’s white suit that attracted so much attention and still does today! I wrote about How to Dress Like Robert Redford in The Great Gatsby last year. The 2013 movie suit is very similar to the 1974 version but with a few exceptions worth pointing out.

With a little knowledge about the style of suit, shirt, shoes, and accessories he is wearing, you, too, can dress just like him. If you need helping shopping online for each clothing item, we have links to some of the best ’20s style clothing on the web.

The Great Gatsby, having taken place during the summer of 1922, makes several references to Gatsby’s clothing:

“…his gorgeous pink rag of a suit…”

1. Buying a two or three piece white suit is the obvious place to start, but what kind? Most white suits are designed as tuxedos or occasionally as linen suits available in the summer. Original 1920s suits would have been made of wool or a wool blend that is significantly thicker than any wool suit today. In the case of the movie’s suit, it is a contemporary white single-breasted, small peak lapel, 3 button jacket with flap pockets. It is made by the Brooks Bothers, who designed most of the suits in The Great Gatsby movie. At this time they do not make the same suit for sale to the public, although they do have similar suits under the “Fitzgerald” line. The one distinguishing difference between most modern white suits and 1920s Gatsby suits are the peak lapels. Most lapels today are notch lapels, which were available in the 1920s but were not nearly as sophisticated as the peak lapel. Shop white suits here.

2. The suit vest was a critical part of menswear in the 1920s. Suits were usually sold as three matching pieces. For a well dressed man like Gatsby, who preferred to set his own trend, wearing a mismatched suit and vest was acceptable. It marked the casualness in men’s clothing that was to become the trend throughout the decade. In the movie, his suit vest is not white as 1920s dress code would require, but instead it is a light tan, almost gold color. The contrast is handsome and thankfully much easier for you to find than a 3 piece white suit.

The vest is a 5 or 6 button V vest which rises up on the sternum. 1920s vests liked to be visible under suit jackets (a sign of wealth that you could afford a 3 piece suit). Vests came in both single breasted and double breasted versions. The double breast is more formal, but nearly impossible to buy today.  I can only image how warm Robert Redford was in his 3 piece, double breasted wool suit in 1974. Leonard DiCaprio is lucky his suit is made of lighter modern fabrics with a single breasted vest.

Tip: Choose any shade of white, ivory or tan to go with your white suit. Avoid any color darker than tan. A lighter pastel color, such as pink, would also have been something Gatsby would have worn.  Shop 1920s style vest separates.

3. Suits pants in the 1920s were single pleats or flat front – no full pleated pants yet. The legs of pants were cuffed with a 2 inch fold. The British were especially proud to wear cuffed pants and so were Americans who followed British men’s fashion in the twenties. In the 2013 movie the pants are straight hemmed, not cuffed : ( One thing to note about pant leg widths: In the mid ’20s and into the ’30s, men’s pant legs grew increasingly wide. The oversize wide leg Oxford Bags were trendy with young college kids. Since The Great Gatsby took place in 1922, the pant legs were a classic width. No Oxford bags just yet, and certainly not slim fit.

The other thing to note is the height of the pants. Men’s pants up until the 1960s sat very high on the waist, almost touching the rib cage. Today’s pants sit very low on the hip. When buying pants for a ’20s look you may want to get a classic fit or formal pant because they tend to fit higher up. You can also get one size up and hold up the pants with button on suspenders (which you should do anyways). The key is to be sure you can move around and not have any shirt show between your vest and pants. Raise your arms, dance around, then tighten your suspenders. Avoid very stretchy elastic suspenders. They tend to loosen as you move too much. Shop 1290s Style Men’s Pants. 4. The dress shirt Gatsby wears is a light blue, French cuff shirt with pointed soft collar held in place by a collar bar. A collar bar clipped from one side to the other while the necktie hangs over it. Collar bars kept soft collars in place instead of curling up or turning into a wrinkled mess. They are a very snazzy accessory that will take your look from good to amazing.

Another option for a shirt is to have a solid color shirt with a white collar, especially a club collar (round edges). These two tone shirts were especially popular in the 1900s to early 1920s.  Shop 1920s style men’s shirts.

5. A necktie is essential to the Gatsby look. The tie always matched the pocket square folded in the breast pocket. The two items did not need to be made of the same material, just the same color. One could have a pattern to it while the other be solid. Pattern ties were often sold with solid color pocket squares.  Common colors in the 1920s were gold (which is what Gatsby wears), navy, red, dark purple, green, and some pastels in summer time. Popular patterns were large paisley, three color diagonal stripes, macclesterfield (small circle, squares or diamonds, repeated all over the tie), polka dots, and sometimes plaid. Thin knit ties were another trend in the twenties. Often these were handmade by mothers and wives. Bow ties too were another popular necktie.  Shop 1920s style men’s ties. 6. Two tone Oxford shoes were an increasingly popular summer or sport wear shoe for men. The most common colors were brown and ivory followed by grey and white (what Gatsby is wearing). The wingtip design was the most formal. The saddle pattern was available in the 1920s for sporty shoes. For a more formal touch, small holes called broguing were punched around the seams of the shoe body and on the toe vamp in decorative patterns.

Tip: Two tone shoes are a very fun accessory to splurge on. They are not cheap, though, so if you need to wear a basic pair of lace up Oxfords in white or brown, go ahead. Read more about and shop for 1920s men’s shoes. 8. The cane Gatsby walks with is a wood base with a gold handle and tip. High class men often walked with a cane, though since they had cars, there wasn’t much walking they needed to do. The cane was purely ornamental. Shop canes here.

Here is a cheat sheet for you.  Pin it, share it, and use it as your guide: 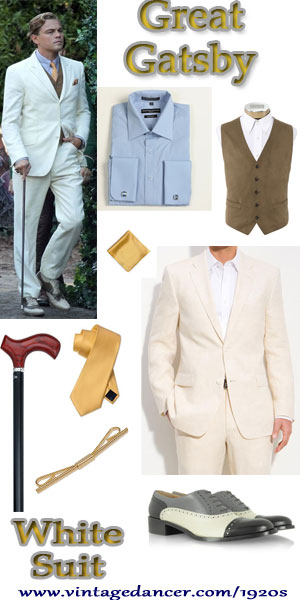 We are Debbie and Oscar, your guides to dressing up like decades past. We are here to help you find clothing online and learn about vintage fashions as worn by everyday people, just like you. Need help with your outfit? Ask us anytime.
« 1940s Sunglasses, Glasses & Eyeglasses History
Corset Fashion Books »