Outside of three piece suits, men were enjoying the new trend for trouser separates in the 1920s. At first, the golfing knickers came off the course and onto upper class British gentlemen who wore them in summer for various non-sporting events and resort wear.

Knickers gave way to their cousin, ‘plus fours’ – something between knickers and pants. And then, as quickly as the plus four trend came in, wide legged Oxford bags replaced them and stuck around for the rest of the twenties.

It was a whirlwind of fashion trends that marked the 1920s as the decade of casual, crazy pants. Knickers and Plus Fours Plus Fours, the New Knickers for Men

Knickerbockers, later shortened to knickers, were popular sports wear for wealthy gentleman. Knickers were baggy pants that fit low on the natural waist and were tight below the knee, ballooning out around the thighs. The knee band changed from a buckle to a knitted cuff after 1924, which fit more neatly into tall socks.

For upper-class gentlemen, wearing white or light striped knickers in summer with a matching Sport coat or Norfolk jacket was the look of the teens and early 1920s. 1927 White Plus Fours with Vest and Sport Coat

Variations of knickers included plus-fours, plus- sixes, plus-eights, and plus-tens. The plus is how many inches below the knee they hung. Plus fours came in tweed wool, linen, corduroy, and flannel.

Many were solid colors, but to be really trendy, men wore stripes, checks, windowpane, and plaid patterns.  They were already on trend when the Prince of Wales went on tour in America wearing plus fours. His approval meant any man NOT wearing plus fours was out of  fashion. 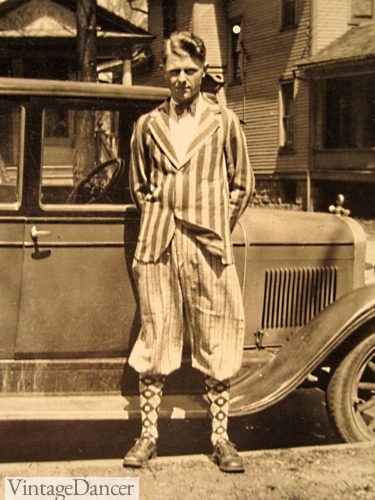 Knickers were worn for more than just sports and casual entertainment. They were common among fashion forward industries such as film makers. The short legs and light weight clothes made them cool to wear in summer. Elite college kids and wealthy gentlemen were the primary wearers of plus four knickers. Plus Fours and a Golf Sweater 1929 men’s plus fours and breeches pants

They are comical when worn today. The large ballooned hips tapered down to the knee and then laced tightly over the calf. A pair of over-the-calf lace up boots or leather putees (gaiters) with ankle boots completed the look. The inside leg and back seat were reinforced with extra fabric or, later in the decade, suede or leather. There were many who despised the sportswear look, and did their best to regulate plus fours in particular out of fashion. In Ivy League schools, knickers were banned from classrooms, which only inspired the invention of the very wide legged pants in 1924: Oxford bags, made to wear over knickers. 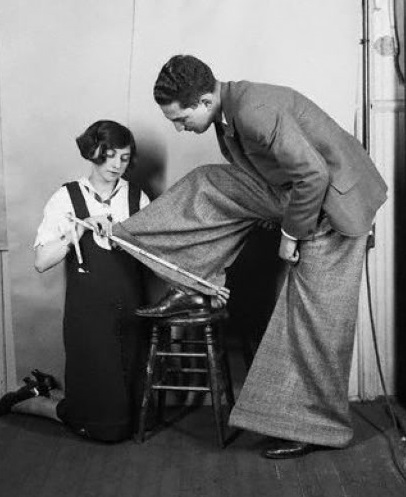 Whoa! Those are Some Very Wide Oxford Bags

Oxford bags were 25 inches wide at the knee and 22 inches at the ankle. At the most extreme, some Oxford bags came to 40 inches around the ankle!

These pants were so popular with young Americans that suit fashion started to shift from the slim British style back to American’s preferred wide leg trousers and natural shoulder jackets. What Europeans copied back from Americans was the array of colors and materials.

Flannel, flannel, flannel. Most Oxford bags had to be made of wool flannel. White flannel pants were first used by cricket and tennis players, replacing duck cloth, which was heavier and warmer. 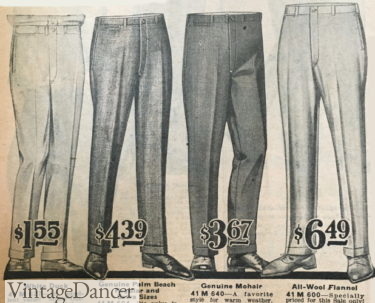 Needless to say, men’s Oxford bags were on the wild side. By 1929, stripes were fading out of fashion but the solid colors grew even bolder: lemon yellow, sunburn tan, metallic grey, pale green, tobacco brown, and pale blue.

The success of the Oxford bags relegated knickers and plus fours back to the golf course, to the relief of the anti-casual crowd. The 25 inch widths of the mid-twenties gradually narrowed to a more reasonable 18 1/2 inches. Wide legs pants became part of suits, casual trousers, work trousers, and even overalls. They were high waisted and flat front, with a center pressed seam from crotch to cuff (or hem if uncuffed). Pants were held up by suspenders for suit wearers, and belts for casual use and the working classes.

The thirties embraced the wider legs with pleated waistbands, making them even fuller than Oxford bags. Yes, Even Portly Men Wore Pants Around the Waist, Held Up with Suspenders

Working class men had no use for light colored flannel bags or linen knickers. But that didn’t mean they ignored the new baggy styles. Tweed, wool, canvas, and corduroy were all popular working class materials. Colors were darker browns, greys and blues.

Wide stripes were not very common in men’s wear (because the stripe was usually a light color that dirtied too easily). Small checks, textured tweeds and subtle pinstripes were alternatives to solid colors. Waistbands remained high, like suit pants, and unlike plus fours. Legs were mostly cuffed with a single pressed line down the front. Belt loops allowed the wearer to choose between wearing traditional suspenders or the new fad for belts.

Working class pants and gentlemen’s sport pants were interchangeable. Sturdy materials were the name of the game for men’s work or play. Certain jobs required a heavy duty pair of pants. This is where overalls came into play. They were never worn as fashion or outside of working labor-intensive jobs, like on the railroad, in mines, or when farming.

At first, overalls were made of thick cotton duck cloth. By the mid ’20s, denim was the fabric to own. Denim or dungaree cotton was a very sturdy, thick material that was usually dyed dark indigo-blue. This is the grandparent of the future “jeans” denim that emerged in the 1950s. Overalls fit very wide on the body, even before Oxford bags came into being. The looseness of the fit made all kinds of work easier on the men. The lack of belt loops or suspenders meant clothes would not get caught on machinery, and the wide fit made more room for large pockets on the sides, back, and front bib area. They were as serviceable as any men’s pants could be. Trying to find high-waisted pants or wide leg Oxford bags is difficult in the current trend for slim and skinny pants. For the most ’20s look with modern clothing, shop for:

Or sew your own! There are a few patterns for knickers and suits that can be adapted to sew a pair of pants.

We are Debbie and Oscar, your guides to dressing up like decades past. We are here to help you find clothing online and learn about vintage fashions as worn by everyday people, just like you. Need help with your outfit? Ask us anytime.
« Did Women Wear Pants in the 1920s? Yes! sort of…
An Organized Costume Closet / Vintage Clothing Room »