Lightweight, silky, nightgown’s had started to become prettier in the 1920s. Instead of white Victorian nightgowns, sleepwear resembled evening gowns, made in very light silk, satin, taffeta and rayon fabrics. Colors were anything but white- peach, pink, lilac, light blue. Prints were rare but a few existed in florals, similar to those found on house dresses.

Most summer nightgowns were sleeveless with a V neckline or had short flutter cap sleeves. Necklines and sleeves were trimmed in soft, delicate lace. Some trim was applied to the bottom hem as well. Like eveningwear, nightgowns were floor length, bias cut, and had a flared hemline. The waist treatment is what changed over the decade. Initially the slip-over nightgown was loosely tied with a thin tie belt. Then came a smooth front and ties in the back or sides to define the waist.  At the end of the decade the waistline came up in a triangle with gathered pleats under the bust and ties to the back.  The empire waist with cap sleeves and round collar was trendy going into the 1940s as well.

1933 plus size nightgown and pajama Silky nightgowns were elegant but impractical in winter.  Instead, flannel nightgowns came in the classic Victorian style, with yoke top, long sleeves, and long loose body. Most nightgowns were collarless but stitching, embroidery and bits of lace embellished the neckline.

To make up for the non-romantic look nightgowns were offered in vertical stripes, floral and all over small prints White was classic but bright colors were more fun. Knitted cotton or wool blend nightgowns were also a winter option. Knitwear, however, seemed to be better suited to the two peice pajama.  Other winter friendly fabrics were soft corduroy and textured terry cloth. Speaking of pajamas, the 1930s fully embraced the “bedroom or lounge” ready two piece set.  The pajama or pyjama, began its trend in the late 1910s gradually building its following to the peak in the 1930s.

There were a plethora of new colors combinations, ties, sashes, belts, waistband and neckline treatments to fill several pages in clothing catalogs.  Most came with a matching loose, hip length jacket. Many pajamas were also worn on the beach, becoming Beach Pajamas. Each new style had a name. Some of them were:

2. One Piece (Jumpsuit) – The one piece jumpsuit style pajama had extra wide bell shaped legs. They were more glamorous than practical as sleepwear (difficult to use to the restroom without disrobing.)

3. Mandarin – The mandarin collar pajama top with frog clasps and “Asian” theme embroidery started the pajama trend. The fit was boxy, modest and quite comfortable.

5. Ski – Pullover knit top with ribbed crew neckline, waistband and pant cuffs. Similar to a sweatsuit. The short button down “blouse top” or jacket top was a similar option.

6. Man-tailored – With a notch collar, button down shirt,  and drawstring waist, these menswear inspired pajamas replaced most others in the 1940s.

There were other styles that combined elements from two or three of these basic designs or took details from women’s dresses, blouses, and jackets. The 1930s pajama was a wild and carefree mash up of many fashions! Women’s robes were either elegant or practical, just like nightgowns. The elegant robes started off with the Kimono style in 1930. They grew in length and cinched in the waist starting in 1931 and remained there for the decade. Large prints and abstract patterns were out of fashion, turning to the simplicity of two tone colors in rich jewel tones.  Most robes were wrap over styles with a sash belt. Some, however, were double breasted with a high military collar.

Sleeves were long and slender, wide dolman shaped, kimono, or puffed shoulders in the late 1930s. Belts were either a matching sash or rope. Tassels gave them a royal look. 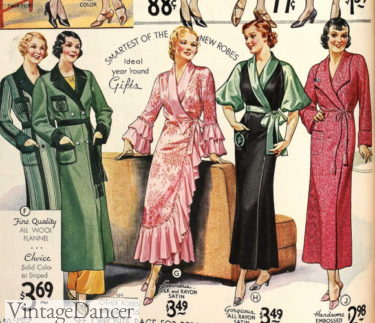 A dress or a robe? The housecoat combined the best of both clothes into a new style in the late 1930s. Read more about 1930s housecoats here. Carrying over from the 1920s were felt loafer slipper with pom poms, bows and elaborate embroidery. Slippers quickly simplified yet expanded shapes to match the variety of pajamas.  Popular colors were black, blue and red. That concluded our look at 1930s sleepwear.

We are Debbie and Oscar, your guides to dressing up like decades past. We are here to help you find clothing online and learn about vintage fashions as worn by everyday people, just like you. Need help with your outfit? Ask us anytime.
« 1960s Sleepwear, Pajamas, Robes History
1950s Men’s Underwear History »