Undershirts were as essential as ever to keeping clean and comfortable – and now they had short sleeves, resembling a T-shirt. Union suits were the primary form of men’s underwear since the Victorian age. In the 1950s, many men were still wearing them, especially in winter. 1950s union suits came in a “onesie” style, with short legs and a T-shirt top or the full leg and arm winter “Long John” style.  Tops and bottoms, called drawers, could also be purchased separately. They were made of combed cotton, wool, silk, or synthetic blends – mostly in white, cream, or tan. 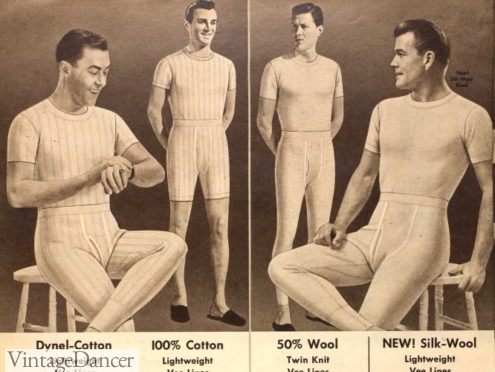 Unlike today, the fit of 1950s boxers were high on the waist and wide in the leg. They also came down to mid thigh.  These fit well under wide leg trousers and shorts, until fashion slimmed down in the late 1950s.

Boxers, called shorts, were made in two styles: yoke and elastic waistband. The yoke front is nearly extinct today, but in the 1950s they made up about 40% of all underwear purchases. The yoke had 2-3 snap “Gripper” buttons and an open fly. The elastic waistband was covered and gathered – only years later did the exposed striped elastic band enter the market. In the mid 1950s, boxers were promoted as excellent gifts for the men in your life. Small prints, novelty themes, and the traditional stripes were made up in yoke top and elastic waist boxers. Classic patterns such as alternating stripes or checks were still popular too. Fruit of the Loom 1950s Boxers with Elastic Waistband Briefs, the 1950s version of “Tighty Whities,” were unchanged from previous decades. They featured ribbed cotton in a high waist, with an elastic band and Y-front pocket. Most briefs came up around the low hip/thigh while others were mid thigh drawers, like summer Union Suits. Unlike the 1930s and 1940s, the short sleeve undershirt was preferred over the tank top style. During WWII and the Korean War, men became accustomed to the short sleeve shirt issued by the military, continuing to wear them back at home. Both the round crew neck and short V-necks were made in flat, drop stitch, and fine rib knits. Tank top styles still featured the deep armscye and neckline.

The newest talk wasn’t design but fabric. Synthetics and blends were advertisers as “cooler,” “easy to wash and dry,” and able to “stay white longer.”  Synthetics cost more, while cotton remained the most affordable. We are Debbie and Oscar, your guides to dressing up like decades past. We are here to help you find clothing online and learn about vintage fashions as worn by everyday people, just like you. Need help with your outfit? Ask us anytime.
« 1930s Sleepwear History | Nightgowns, Pajamas, Robes, Slippers
1930s Men’s Underwear History »