Skirts have always had a special place in fashion history as both a high and low fashion item. The 1940s, due to fabric rationing during the war, created limited wardrobes for women. The 1940s skirt became not just a casual clothing item, but one that all other wardrobe elements revolved around. They were the foundation item of every look a 1940s woman wore in daily life.

1940s skirts were simple styles. War rationg and restrictions in 1941-44 put a ban on the frills and ruffles popular on 1930s skirts. To save on fabric, hemlines rose to just below the knee. Hems could be no more than 2 inches wide.  Thin belts had to stay in place without belt loops, too. Pockets were also not allowed. Fabrics were generally wool and rayon blends for both summer and winter. Colors were drab blues, grey, green and brown. See 1940s fashion colors and fabrics here. 1940s Skirts with single pleat in the front

Although the width was limited to a 78 inch sweep, skirts generally were made with much less fabric. The silhouette was a boxy A-line. Placed at the natural waist, it hung smooth over the hips with a slight flare at the hem, skirts were wide enough to move in, but never very full or very tight. Kick pleats were added to the back of some tighter skirts to make movement easier. While pleats were not banned in the early years, they certainly were not popular.

What was popular was plaid.  Women wore plaid skirts as a casual alternative to matching suit separates.  The plaid prints were large and usually in dark earth tones – brown, tan, green, and grey. Deep red and yellow added some color in the summer. After the war ended and restrictions were finally lifted, skirts added back in some of the special design elements. All around pleating was very common. Knife pleats, inverted pleats and box pleats were the most popular because they kept the skirt flat and smooth over the hips while adding volume at the hem. The overall shape was still A-line, but pleating added a bit more swing to a woman’s step, a sign of post war joy. Colors brightened up with cheerful yellow, green, aqua, powder blue, and red. Colorful tartans and plaids were especially popular with teens. Since they didn’t need to wear a suit jacket with their skirts, they wore cheerful sweaters, pullover tops, and white blouses. The signature look for all teens in the 1940s was a white blouse, plaid skirt, and saddle shoes. After 1947,  Dior’s ‘New Look’ started to exaggerate women’s fashion and the ’40s skirt took on even more volume. Petticoats were not required, although slips featured a bit more fullness at the hem. The skirt fullness was achieved with a wider A-line cut and/or bigger box pleats.

Large patch pockets were added to house skirts and big leather belts and ties were worn to make the waist appear smaller and hips fuller. Most colors were still plain (a versatile wardrobe was still necessary) but some stripes, checks, and floral prints started to appear in summer time looks.

To balance the full skirt, belts were also wide. Leather belts of matching fabric belts featured 5 plus inch wide belts, with or without buckles. They were usually worn over the skirt instead of through belt loops on the skirt. Big Belts and Fuller Skirts of 1947 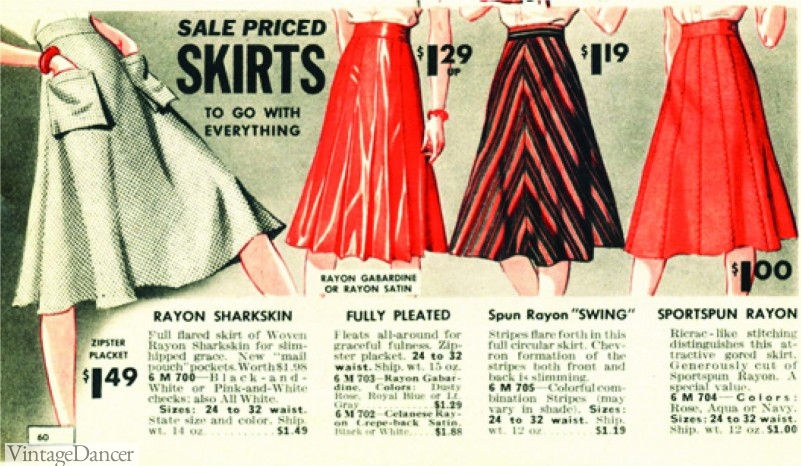 Something interesting happened during the war years. The U.S. started to import clothing from Mexico. They were much cheaper and more colorful than anything women could make or buy in the States.  The skirts were knee length and A-line, but also featured the ruffles and trim missing from rationed skirts. They also had embroidery and lace edging in an array of bright, cheerful colors. Folk patterns and characters decorated many peasant skirts. They were a breath of fresh summer air during a depressing time in history. After the war, U.S. designers incorporated peasant skirts and blouses into summer fashions. Additional styles were borrowed from other ethnic regions such as South America and tropical Hawaii. The peasant skirt was usually called a Dirndl skirt for its similarities to Austrian folk skirts. Peasant dresses were made of matching skirts and tops too. Late ’40s dirndl skirts, especially those for teens, used less traditional ethnic patterns and instead turned to Americana folk art. The large flowers and giant strawberries pictured above are two examples of these American art styles. It was these bold art prints that led to the cultural love of applique poodle skirts in the 1950s. It was also the dirndl skirt with its gathered waist band that gave way to the fully gathered circle skirt that dominated the next 10 years of fashion. Straight Skirts in the late 1940s

While a lot of credit is given to the 1940s for starting the pencil skirt trend, it’s simply not true. Towards the very end of the 1940s, skirts did get slimmer, especially with suit sets. They can almost be called pencil skirts, but they were more straight cut, not form fitting wiggle skirts.  The came down a little longer, too – a few inches below the knee, where they tapered in slightly. This newer style was worn by the rich and famous. It wouldn’t become popular with common until well into the 1950s. A pleated A line skirt is a classic style perfect for a 1940s look.

One of the first 1940s thrift store costumes looks I made was a simple 1940s skirt and blouse. Pictured above, the blouse is a vintage late 1940s top paired with a 1980s pleated skirt, vintage summer hat, and bead necklace.  Nearly any pleated skirt, lightly gathered skirt, or plaid A-line skirt from the thrift store can be a great start to creating a 1940s look. I am always on the lookout for A-line skirts to add to my collection. When shopping, don’t forget to check out the 2-piece suits. The jackets are usually too modern, but the skirts can be perfect.

For 1940s reproduction skirts or vintage inspired styles, there are some nice options available. Most vintage inspired skirts tend to favor the 1950s circle skirt or pencil skirt. For a genuine ’40s look, it is better to choose a knee length A-line style or dirndl skirt (if you can find one).

We are Debbie and Oscar, your guides to dressing up like decades past. We are here to help you find clothing online and learn about vintage fashions as worn by everyday people, just like you. Need help with your outfit? Ask us anytime.
« Vintage Skirts – Pictures from 1900 to 1950s
Saddle Shoes History »