“It’s the ‘hardy perennial’ of shoe fashions… ever smart…ever now!,” claimed a 1930s description for brown and white saddle shoes. If there ever was a 2oth century shoe that was always in style, it was the saddle shoe. Developed in the 1900s, it took 50 years to reach movie star status in the 1950s, but it was always a wardrobe staple, experiencing only slight changes over half a century. It is an icon of vintage style today.

Let us explore how saddle shoes evolved over the years. 1922 white canvas with black leather saddle strap and heel back stay. Notice the square toes too.

My usual fashion history sleuthing came up empty as to the origins of the saddle shoe design. What we do know is that it was initially a sport shoe designed for men. Golfers, in particular, picked up on the two tone color scheme and incorporated it with their uniforms starting around 1910 and lasting well beyond the ’20s and ’30s. Men quickly diversified the two tone combination into wingtips Oxfords and loafers. They replaced the simple saddle pattern with a swirl of two tone colors. Concerned about dirty shoes, they also replaced white with an off white color.

Women, however,  enjoyed the simplicity of the saddle design and embraced it much more than men. As with all things sporty in the 1920s, women were quick to take the men’s saddle shoe and wear it for themselves. They liked the pure white contrast with black leather saddle. Pure white soles were a must too. They required frequent cleaning and whitening of the white canvas material.

Heels remained very low to keep with the ease of walking, running, or hiking. Girls often wore them in gymnasium classes. The majority of clothing catalogs at the time targeted saddle shoes to women and girls equally.  A morelady like Cuban heel was added to some women’s Oxfords to marry the common walking shoe with the casualness of the sporty saddle pattern. They were worn with sporty knits, house dresses, and men’s style knickers in the 1920’s. The trend for canvas continued into the Depression era. Other materials were cheapened to keep them affordable.  Leather or rubber saddles were replaced by dark fabric – whatever scraps the factory could acquire for cheap. Crepe rubber was the “new” style of sole to have, since it was durable, non slip, shock absorbing, and less costly to make. We started to see some contrast white stitching and white laces in the 1930s. Depression or not, women still wanted to look fashion forward! 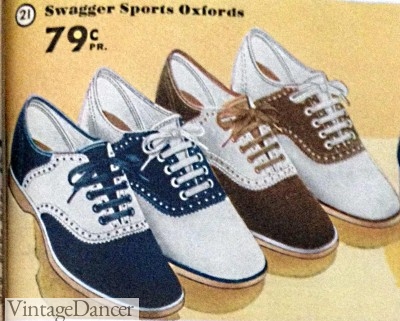 The mid 1930s also saw the first pair of shoes to leave the brown and white or black and white color combination. Blue and white canvas saddle shoes became the new trendy shoes to wear. Lighter shades of brown also made them more feminine and complimentary to lighter summer fabrics. Soles were usually a natural rubber color that looked best with lighter colors too. Only the Oxford style with taller heels used leather soles instead of rubber. Saddles shoes were still mostly a summer time shoe, especially when made of canvas. 1937 Men’s saddle shoes with crepe soles in brown/brown or black/black. By the end of the 1930s, the Depression lessened and factories returned to making leather saddle shoes. Men could now afford leisure shoes again, and more saddle shoe designs were available for men. Steering away from the color combination that women were wearing, men’s shoes now came in dark on dark tones. Tan on dark brown, black on black, blue on black, and black on grey were just some of the new options. The 1940s was when saddle shoes really came into pop culture. Men were wearing two tone shoes with business attire, and women with afternoon dresses and even suits.  They were no longer a sport only look. It was the female teenager, however, who adopted the saddle shoe as her exclusive shoe.  Having worn them as girls, young teens still found them to be a style that was more youthful than most women’s shoes, such as the wedge or peep toe.

With the war going on in the early ’40s, the “make do and mend” mentality applied to footwear for everyone. The respectful trend with teens was to make new saddle shoes look old:

“At the time it was the style to wear dirty saddle shoes, so spent the rest of the day rubbing my new shoes in the grass and driveway gravel until they looked just right” – Marge Goral (quoted in Life in the Fantastic Forties)

See if you can spot the dirt in the following photos of teens in the 40’s. 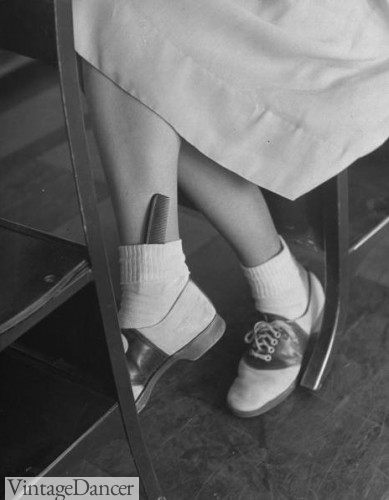 1940’s saddle shoes, Bobby socks and a hair comb? A trendy way to say “I care about my appearance.” Teens in the ’40s started the trend for saddle shoes and bobby socks. They were nearly always black and white saddle shoes with either natural or black rubber soles. The dirty shoes trend ended, and the latest craze was for red rubber soles and spotless “just like new” saddle shoes. Girls would spend an hour everyday cleaning and polishing shoes to perfection.

Starting in Junior High, every girl and now boys had to wear saddle shoes. For the girls, they looked best with poodle skirts. On the weekends and in summers, they looked great with denim blue jeans, too. These teens were called “Bobby-soxers” because they always wore white socks with their saddle shoes. “Bobby socks are a fun and comfortable way to ‘girly up’ masculine footwear like brogues or saddle shoes. The socks are generally ankle length and white with a lace upper that folds over, sometimes with a ribbon bow to add a decorative element to a plain shoe.”- Queens of Vintage, “How to be a Bobby Soxer”

Bobby socks had to be folded down just right, in perfect symmetry with each other.

In Baltimore I either wore saddle shoes or a ballet type slipper.  If wearing saddle shoes the socks had to be rolled precisely and then one year I had things that were like doughnuts that went inside the rolled part.  That way the cuffs were huge.  Don’t ask why-I don’t remember! – Barbara, Madame Hatsy (check out her hat shop!)

Housewives also loved saddle shoes. Comfortable to wear around the house yet too informal to be “proper,” housewives quickly changed into heels before their husbands came home. It was a secret ritual women performed daily, yet their husbands never knew about it. 1957 Bubble saddle shoes with back buckle, black soles, black laces. Also in grey and black and all black styles.

In the mid 1950s, the “Bubble” saddle Oxford became common for a few years. It was a slimmed down version of the chunkier saddle Oxford and often had a buckle across the back of the heel. The soles were also thinner and heels low. It was a lighter, more fashionable version adopted by students. It was often called “Ivy League” or “Ivy Style” for its popularity with college students. 1964 black and white and black on black saddle shoes

You would think that after such a pop culture explosion of the saddle shoe in the 1950s, the style would be outdated by the 1960s. Not quite. Girls, boys and young teens continued to wear the shoes as their daily uniform. Many schools actually made saddle shoes part of the dress code well into the 1990s.  Black soles were replace by white soles in the early ’60s, and the black on black saddle became the newer trendier school style.

The 1960s was the last decade that adults were seen wearing the shoes. Why the sudden change? It had a lot to do with the rebellion against old school values and styles. The mod generation embraced two tone color blocking into fashion, but not the saddle shoe. By now it was too old, had too much history, and was too childlike for a grown up generation. Sad, but all good things must come to end… at least until the next revival. 1960s women and saddle shoes and sailor play suits, (This must have been for a performance where women were acting as school children. ) I would like to say the saddle shoe has come back in fashion as fervently as they were in the ’50s. They haven’t, but that doesn’t mean they can’t be found. There will always be saddle shoes for 1950s costumes and men’s shoes never did lose the saddle from their line (although just in dark colors, rarely a re-run of the black and white combination). A recent trend for walking Oxfords and ballet flats saw a few saddle patterns return on women’s shoes as well. Basically, if you want a pair of saddle shoes to recreate for a vintage costume or your vintage inspired wardrobe, you have some options: Here are some more shops to look at for vintage reproduction saddle shoes:

G.H. Bass saddle shoes – For women, the “Dora” saddles shoes are an excellent quality shoe. Unfortunately, the men’s have been discontinued in the black/white pattern.

Orvis – For men, Orvis has classic brown and white saddle shoes. I am still on the hunt for high-quality men’s black and white shoes.

Muffy’s – Red sole 1950s saddle shoes are difficult to find but Muffy’s has them. VERY nice shoes. Many other 50s styles too. The website is outdated and not always working. Call or look at their eBay store.

We are Debbie and Oscar, your guides to dressing up like decades past. We are here to help you find clothing online and learn about vintage fashions as worn by everyday people, just like you. Need help with your outfit? Ask us anytime.
« 1940s Skirt History
Vintage Shoes in Pictures | Shop Vintage Style Shoes »