Part two of this series of vintage sweaters continues with the 1940s, 1950s, and 1960s. These three decades were a time of refinement and embellishment for the plain sweater that had been in fashion since the 1900s. Sweaters in the 1930s moved from sportswear only to a blouse alternative with fitted, feminine silhouettes and colors. The 1940s continued the shorter, tighter fit while adding trim and embellishment to cheer women up during the war. Novelty designs also came about to add some fun into fashion. Pretty decorations and cute appliques were the norm for the 1950s sweater that now fit a little tighter, creating a generation of “Sweater Girls.” By the 1960s, all things fancy and fitted were out and in its place, a simple boxy with a handmade look reflected the new street culture.

The changes were mild in design, with each decade reflecting cultural shifts and the invention of new yarns and knitting techniques. Let’s take a look at them in more detail.

The 1940s are called the “Golden Age of Knitting.” Entire magazines were dedicated to home knitting patterns. Most home or women’s magazines also included free patterns for knitting sweaters for the entire family. During the war years when new yarn was expensive, an old knit sweater was often unraveled and reworked into new designs. Because of this, colors were no longer just solid, but included trims in contrasting colors. The fit of sweaters remained the same as in the 1930s, with waist-length hems and thick 3″+ bands. While the overall shape relaxed some into the 1940s, the teenager took it to new extremes. They wore Sloppy Joe sweaters – oversized men’s and women’s sweaters and cardigans slung over a shoulder. If she was really cool, she wore them with sleeves pushed up and shirt collar poking out.

Sweater sleeves grew puffy in the early ’40s and thinned out to a normal fit by the mid ’40s. Waist bands and sleeve bands narrowed a bit, too, to just a few inches, which was enough to keep the sweater in place and cold air out.  Both pullover and cardigan styles were worn throughout the decade. Colors were still bright and cheerful, with red and blue being the most patriotic. With the invention of new synthetic materials (mostly nylon) and the rationing of cotton and wool, 1940s sweaters looked to other sources of yarn. Angora hair (rabbit) was frequently used during the war, replaced by cashmere after the war if she could afford it. Women often raised rabbits for meat in their backyards, and the fur was collected and spun for knitting. They were very soft, warm, and fuzzy, hence the new sweater style name — “fluffies.” A few fashion designers started to incorporate sweaters into eveningwear by lining them in the dress material and adding beading, sequins, embroidery, or appliques. This advanced the utility sweater into something of glamour. However, since so few could afford new evening ensembles, the ready to wear market started adding embellishments to its daywear sweaters and patterns. The designs were less fancy than for eveningwear with the use of contrast yarn, ruffles and homemade applique from scrap fabric. Motifs of bows, flowers, fruit, and patriotic themes were the most common. Instead of attaching appliques to create design, the later 1940s started to see designs knit into the sweater itself. These again were cheerful themes of animals, hobbies, or big patterns like wide stripes and windowpanes. Adding small designs also helped women recycle old knit items into a new garment. These cheerful details uplifted spirits during hard times. There was a trend of knitting matching couples’ sweaters and giving them as gifts. Early 1940s Sweaters. Some were made with fuzzy brushed wool or angora hair. Mid 1940s Sweater and Cardigan in a relaxed fit 1950s sweaters followed the New Look hourglass shape with protruding bust, tiny wasp waist, and full hips. The look was snug and tight to balance out the full circle skirt bottoms or to match the confining pencil skirt. In reality, they were no more snug than most sweaters in the 1940s, but the lingerie made them look more fitted.

The term Sweater Girl started in the 1940s with movie star icon Lana Turner. She and other young women, wearing snug fitting sweater tops were seen as both innocent and sexy. The modest coverage of the sweater said,  “I am a good girl,” while the two-sizes-too-small fit said, “I have breasts!” To be so flaunting of a woman’s natural assets was taboo in good company. With the invention of the Bullet bra in the ’50s, the Sweater Girl look only became more pronounced. To keep women modest and refined was still the moral game of the 1950s. A new invention, the sweater set, allowed a woman to wear a tight short sleeve sweater top but remain covered up with a (usually, but not always) matching cardigan. The cardigan was usually worn with the top button buttoned only — otherwise, it would defeat the peek-a-boo seduction. Button size was also small and dainty. Sleeves were slender with a long narrow cuff that could be folded over.

“In winter I wore sweater sets. I had them in almost every color except baby blue, and I had little clips to hold the cardigan in place on my shoulders when I didn’t have my arms in my sleeves. These clips were an early lesson in nonfunctional fashion. I loved the look but seldom used them. When I tried, my cardigan quickly slipped off my shoulders altogether, the chain between the clips rode high on my neck, and I looked like some sort of sweater-set Superwoman with my cardigan flying along behind me. ” – Rochelle Reed, What We Wore 1950s Sweater clips worn with the sweater on. Usually they were used to hold the sweater draped around the shoulders like a cape. The look was also rich with finer knit yarns of cashmere, lambswool, angora, nylon, Dracon, Ban-lon, Tycora and Orlon. Premiering in 1952, Orlon was the first acrylic fiber on the fashion market. Because it could be knit, washed, and was shrink proof, it was quickly adopted as the perfect sweater material. Over 70 million Orlon sweaters were sold in the first 4 years on the market.  The only downside was that is could not take dark dyes, so it was limited to white and pastel colors.

Milk beads were an expensive embellishment sewn into the sweater around the collar and lapels or all over if you were rich enough to afford one. Designs were floral and occasionally other novelty themes, such as snowflakes in winter. Sweater colors exploded with more choices, especially light pastels: pink, blue, white, yellow. They were also quite plain again, except for those with sewn-on embellishments. The sweater girl look was clean, thin, and minimal. Necklines were high and round or with a small V-neck on cardigans. There was an overall lack of texture or knit in designs. Occasionally there were some stripes or a contrasting trim, but these were mostly worn by older women whose style still reflect the 1930s and 1940s.

In the early years, it was a fad for teens to wear their cardigans backwards, but by the end of the decade it just meant they were too poor to own a real pullover. Nearly all girls owned and wore a cardigan or pullover sweater twin set with their school clothes. It was so pretty and polished! Little chiffon or silk scarves were paired with sweater sets and blouses. They were only 12 inches long and were folded and tied to the side of the neck. 1959, sweaters grew longer and looser especially for mature women in the late 50s

I love a good ’50s sweater. The short, cute, goes-with-everything classic style is part of my winter wardrobe. I am picky, however, about fabrics, and finding cotton or natural fibers is a rare treat. For synthetics, however, choices are plentiful, from the iconic twin set to the more modern crop cardigan. Shop for sweaters here.

The 1960s fashion world was in for a big shake up, a youth driven earthquake of change. The sweater was divided into two fashion demographics — the first was the old guard, for women who embraced the 1950s regal look of clean lines. Like their fashion icon Jackie O, these women wore sweaters that fit the new boxy silhouette. Sweaters and cardigans were not form fitting anymore. Now they fit loose like a box from shoulder to hip. Embellishments weren’t fancy beading or small buttons. Instead, the chunky knit sweater or “bulkie” was developed.

Sweater knits were heavy, defined patterns with raised knit in embellishment. Texture was the name of the sweater game. Vertical stripes, zig zags, flowers, leaves covered sweaters.  Collars, if they had them, were oversized rolls, large shirt collars and short shawls. Even collarless cardigans had thick collar bands and matching cuff bands. Every detail that was hidden in the 1950s was dramatized in the 1960s.

Sweaters looked hand-knit, or arts and crafts-like, which reflected the youth’s movement away from refined designer fashion to homemade arts. Many buttons were covered in matching knit yarn instead of plastic or were made of wood for a more natural down to earth vibe. Buttons were back to being overall bigger. Their similarities to early ’20s sweaters is striking.

Early ’60s colors still favored pastels in spring, while fall and winter saw new earth tone colors emerge — mustard yellow, moss green, burnt orange, sea blue. Just like in the 1920s and again in the 1940s, more sweaters had knit-in patterns. They were not quite mod et, but they were Art Deco, Folk, or featured big florals.

The other demographic of ’60s fashion was the youth. They heavily influenced mature women’s sweater fashion while developing their own trends.

1960s teens wore skirts and sweaters to school daily. They were not afraid of big patterns and brighter colors. More and more colors in clashing patterns were added to the styles as the decade progressed. The trend for the homemade or “poor person” look was simultaneously running alongside the flash fashion mod fad. Since sweaters naturally have a home arts feel, they trended in that direction. One trend in 1965 was to take large wool sweaters and boil them until they were half the size. They became crop sweaters since the length never reached below the waistband with short elbow length sleeves. They were tight all over and looked look like doll clothes or “poor boy sweaters.”  The Mods especially love the tighter poor boy style. American teens were not quite Mod enough, however. They still wore baggy sweaters over their turtleneck shirts. 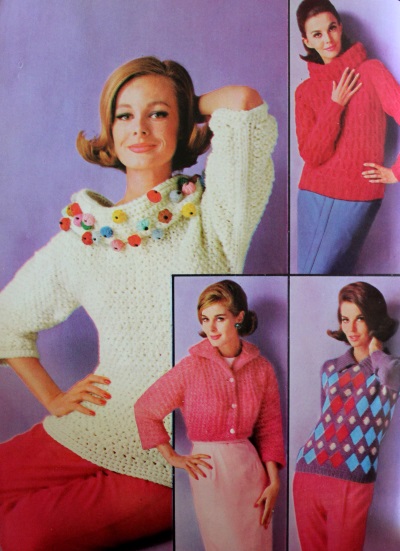 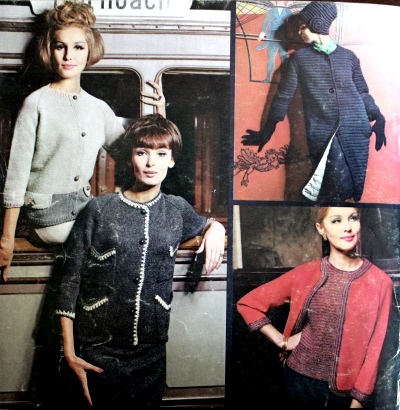 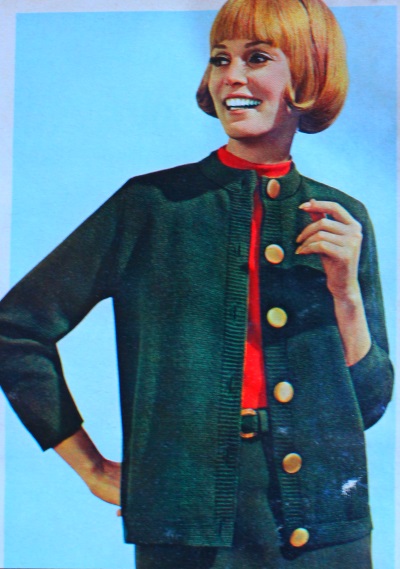 1967- A classic Cardigan never goes out of fashion

**I haven’t found any knitters in the USA.  Do you know of any?

We are Debbie and Oscar, your guides to dressing up like decades past. We are here to help you find clothing online and learn about vintage fashions as worn by everyday people, just like you. Need help with your outfit? Ask us anytime.
« Vintage Sweaters – 1910s, 1920s, 1930s Pictures
1960s Shoes: 8 Popular Shoe Styles »