Before the 1940s, women simply did not wear pants as a normal part of their wardrobe. It wasn’t until women began working in factories, doing traditional men’s work, that safety reasons required women to start wearing pants. At first they just had to make do with wearing men’s pants, but with a growing all-women workforce in the early 1940s pants had to be designed for women as well. Pants were much easier to work in than a skirt or dress, especially in manufacturing jobs, where skirts could get caught in machinery and sitting in them proved to be less than modest. At first, pants were only publicly worn while working, but as the ’40s wore on, women began to wear pants as everyday attire for home and public day-wear.

At first, pants (or ‘slacks’) were worn freely by young women. Vogue magazine, who did not enjoy this new fashion, said, ” We deplore the crop of young women who take war as an excuse for.. parading about in slacks” (1939). Wide leg slacks hid the curves of women’s bodies – a form of beauty men needed to keep positive during tough times. Women’s pants of the 1940s were not exactly figure-flattering.  The design was basically the same as for a man’s pant, tailored and not meant for the female form.  Pants sat at the natural waistline, well above the belly button. They were tight around the waist, with a wide waistband of about 2 inches. A thin leather belt was often worn in the middle of the wide waistband. From there they had straight, wide legs that fit very loosely around the body. A single pressed line down the front was common, just like on men’s trousers. Pant legs were usually uncuffed with large slit pockets on the sides only. Extra large pockets, often called Kangaroo pockets, appeared on some trousers. The size of the pocket meant women could put more things in them quickly and have their hands free to carry children to safety or hold tools on the job.  A multitasking woman in the 1940s was more important than fashion. They were made of wool blends, cotton denim, cotton twill, wool flannel, gabardine, cotton corduroy, and seersucker in colors of black, blues, greys and browns. Some later ’40s pants came in wide stripes, plaids and checks such as the houndstooth pants Marilyn Monroe is wearing in the image above. Unlike men’s trousers which buttoned up the front fly, women’s pants were fixed at the sides with several buttons, and in the late 1940s with a side zipper.  The reason for this was that a front fly on women was seen as too “manly” too “vulgar” for a woman. Since women were already buttoning up skirts and dresses on the side, so making pants do the same was no issue. As women began wearing pants for every leisure occasion, they started to create a signature style. A nice pair of slacks needed a casual 1940s blouse to go with it. Worn tucked in but not tight, blouses were the most versatile top to wear with pants. A knit pullover shirt or sweater was another sporty option for leisurely days with friends. These pants suits were becoming common place as both work attire and play clothing. The untucked, button up shirt matched the pants and came with pockets for holding tools while at work. They were equally useful at home for holding clothes pins while hanging laundry, or seeds while planting a Victory garden. The other style of women’s pants of the 1940s were the famous Rosie the Riveter coveralls. These were usually made of blue denim or heavyweight cotton canvas in brown, tan, or blue. The coveralls buttoned down the front middle to get in and out of, and were loose-fitting throughout.  They often had breast pockets to keep pens and small tools in. Both the long shirt sleeves and pants cuffs were tied tight around the wrists and ankles to keep them from being caught in heavy machinery. Overalls featured a bib front or two suspender-like straps that held up the pants, which were called pinafore style pants. Large slit pockets or a patch pocket on the front provided yet another place to hold things. Similar to play overalls, they were made of heavy denim, but with the same fitted design of the 1930s. 1944 casual overalls paired with a striped T-shirt, white blouse, or no shirt (gasp!)

After the war, women returned to their playtime overalls made of softer fabrics. In summer, teens wore their overalls without a shirt underneath. Otherwise, women wore a knit T-shirt or button up blouse underneath. The bibs on these overalls took on the Pinafore shape with modest coverage around the bust to the back, only exposing the neck and shoulders.

New materials were also introduced, such as rayon or other synthetics, cotton twill, and chambray. Lighter tans and greys, solids, and stripes were part of these revived fashions, although the classic navy blue with white buttons never went out of style.

Learn more about the history of women’s overalls. Men’s blue jeans had a loose fit, long crotch, and a wide rolled cuff. Women’s cut jeans had a narrowed leg (that was still rather boxy), curved hip, and a side zipper. Some women’s versions had buttons like men’s sailor pants. In 1948, Wrangler invented the front zip up jeans for women. Women didn’t like the new front zip, at least not until the 1950s. There were two big blue jeans brands in the 1940s: Levi’s and Lee. When Wrangler tried to enter the market, they turned to Rodeo, a growing entertainment sport to get the word out. Rodeo stars had near-Hollywood status — and it wasn’t just the cowboys. Women competed and won wearing Wrangler Jeans with its signature logo on the back pockets.  There were singing cowgirls too – entertainers on TV singing country ballads wearing a variety of Western dresses and blue jeans. Regular country folk wore blue jeans more often than city slickers, who only wore them while on vacation to Dude Ranches.

It was the 1940s American teenager who adopted men’s jeans and made it part of her casual wardrobe, even in the city. She paired them with men’s button down shirts with rolled up sleeves and a leather belt. Hmmm, isn’t this the same “boyfriend” fashion we have today? Yes, yes it is. Learn more about the history of blue jeans here and western clothing here. Jumpsuits or ‘siren suits’ served another use during the war. Made of a soft flannel or lighter cotton, they were an ideal clothing item to wear over pajamas or a nightgown in case one needed to change quickly during an air raid. They zipped up the front to make them easy to put on, cuffed around the ankle, and came with hoodies to cover up hair. Hooded capes and coats were an even quicker coverup for air raids.

Nearly any wide leg pant with a high natural waist line will give you an instant 1940s look. Since most repros are denim or heavy cotton, it is nice to get a pair of slacks for dressier occasions. Here are some good options currently on the 1940s style pants shop page.

You can also sew a pair with one of these patterns. 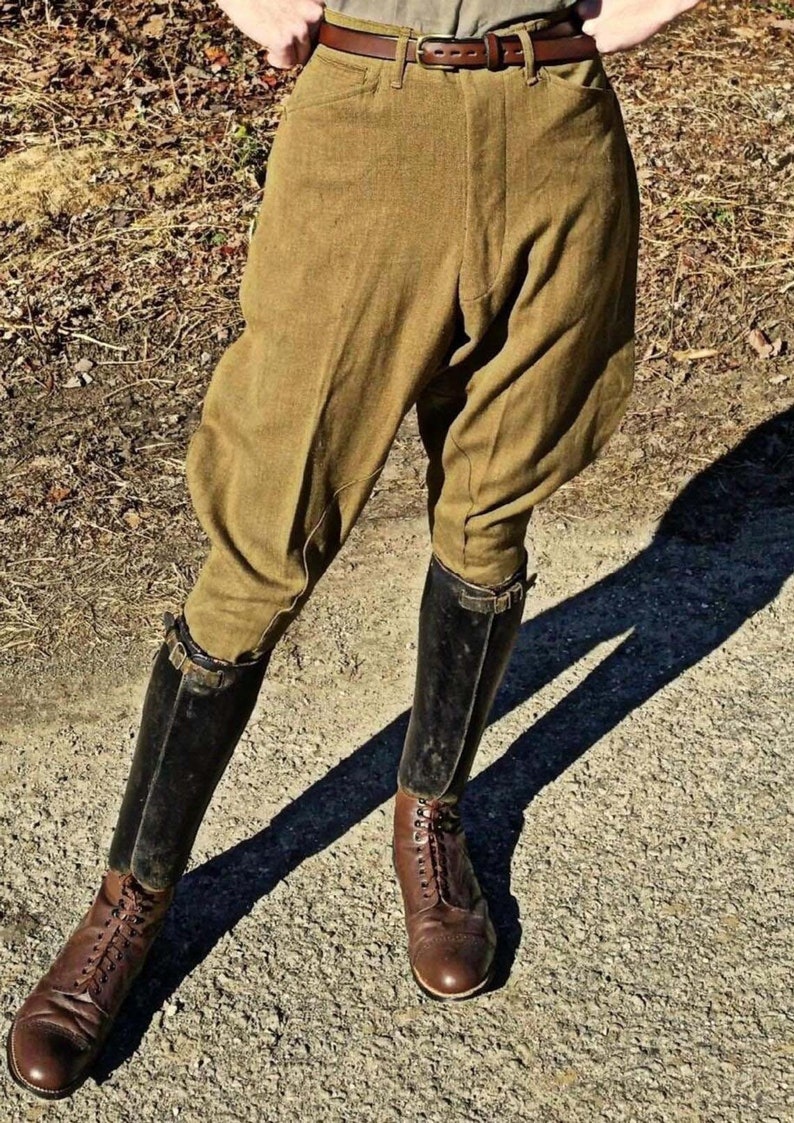 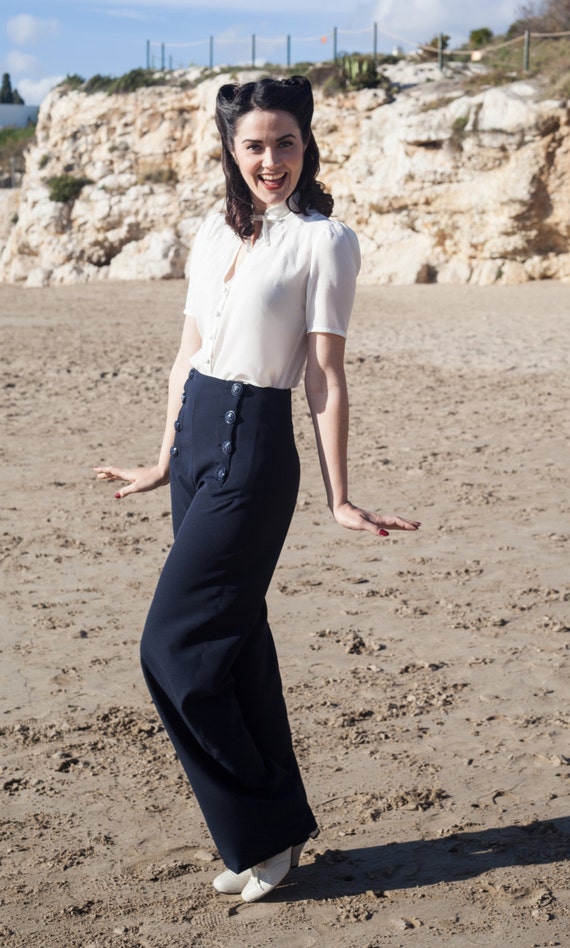 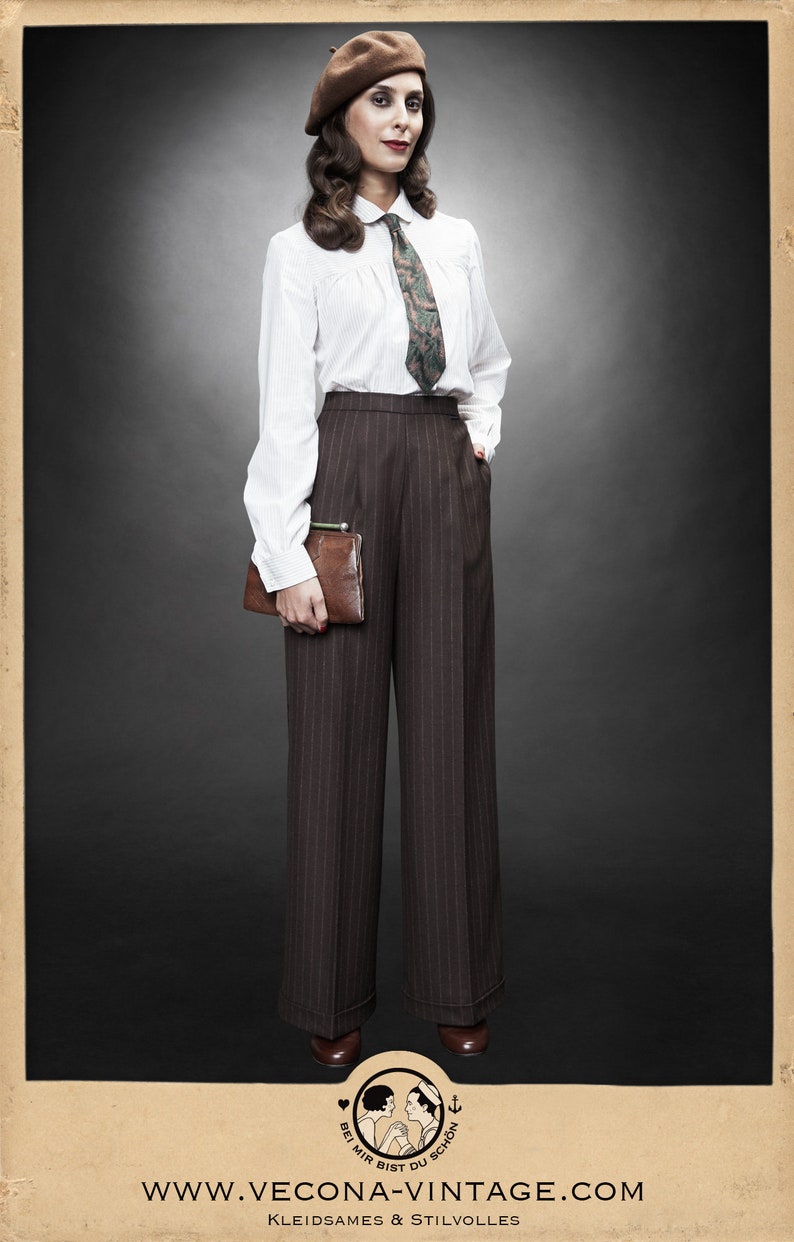 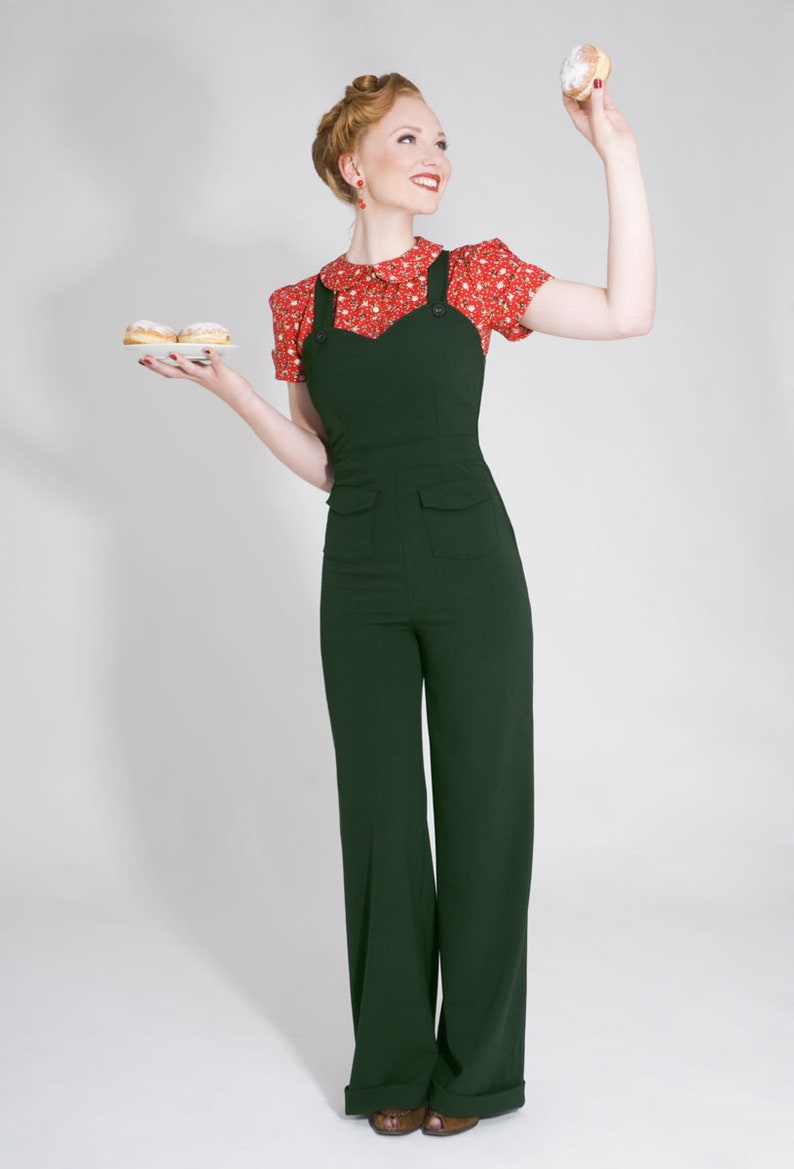 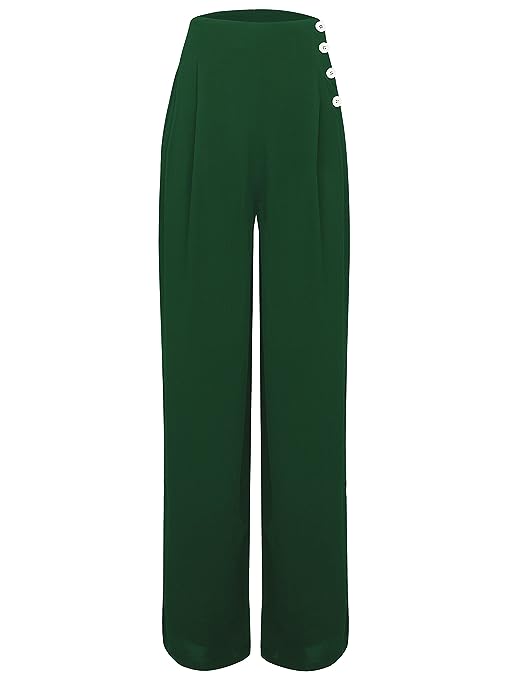 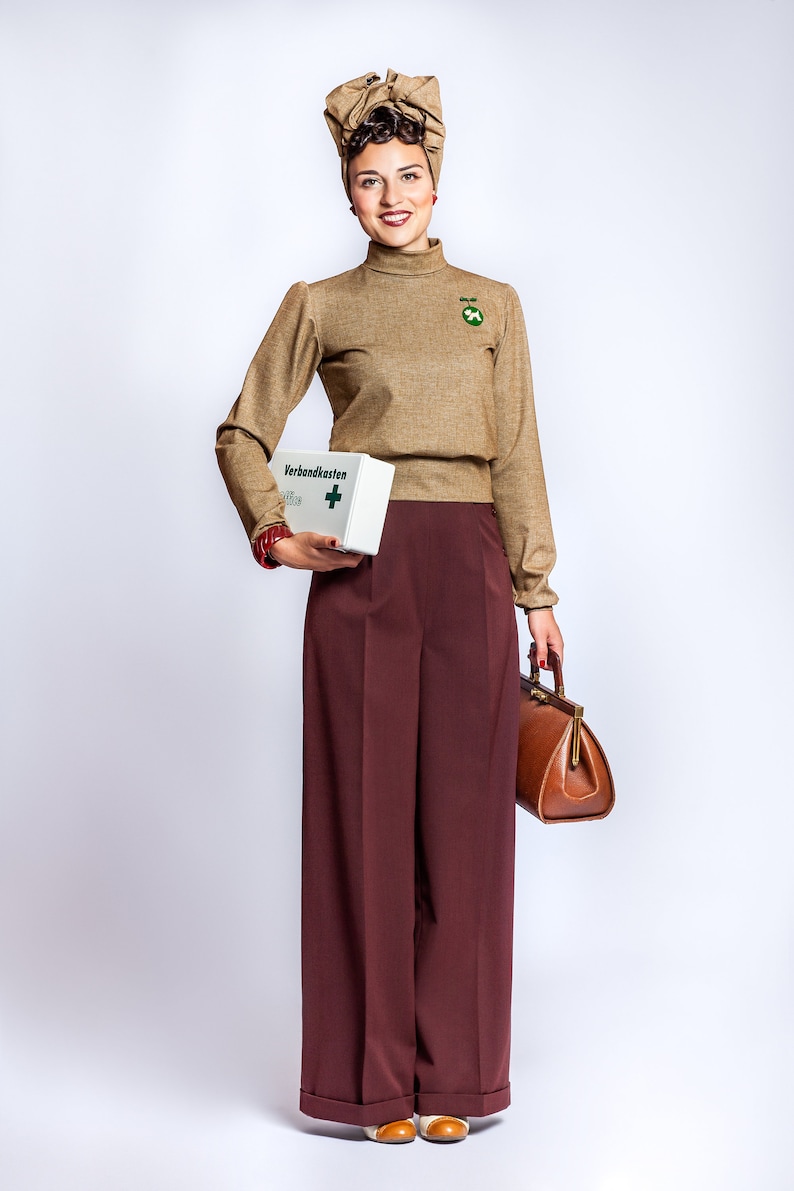 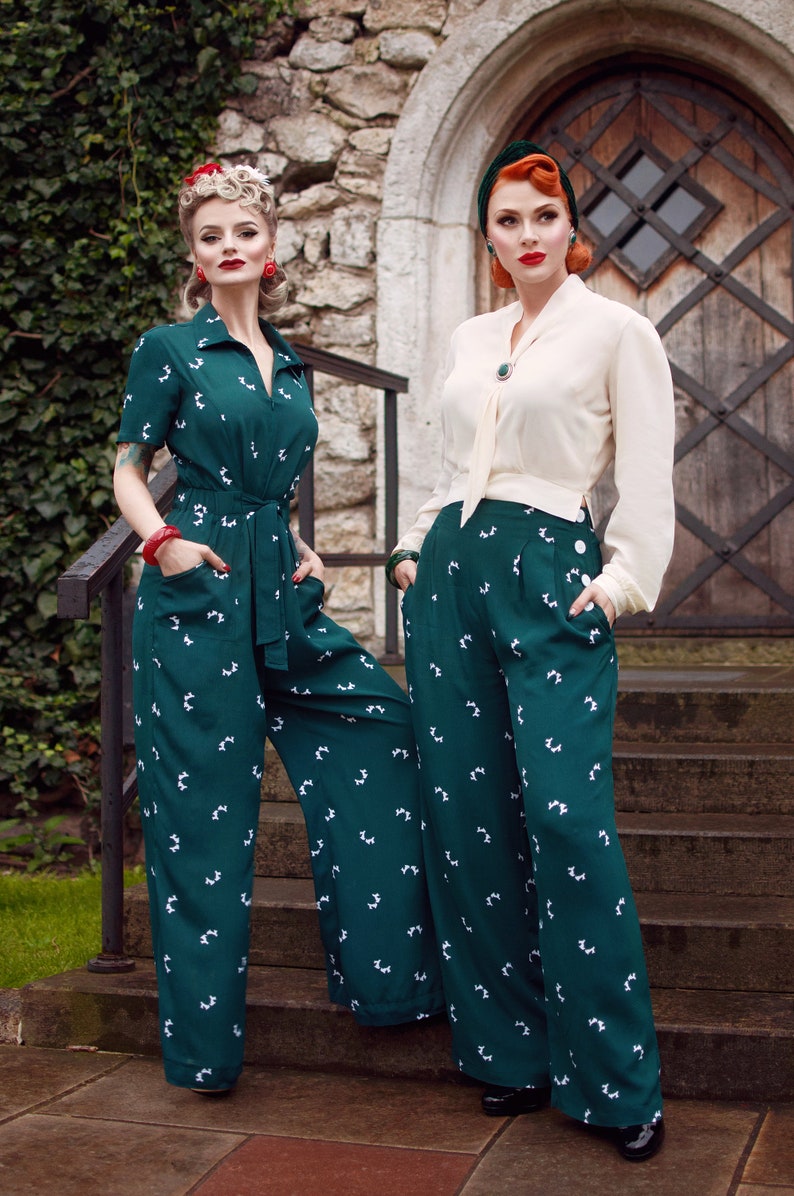 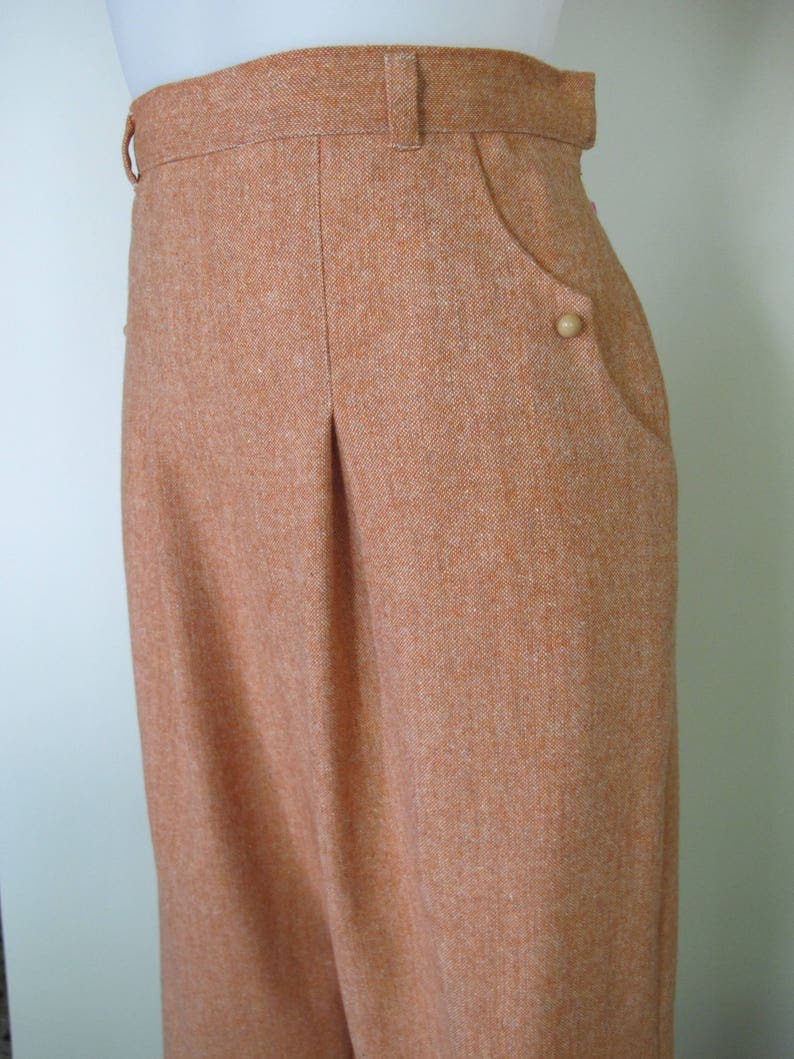 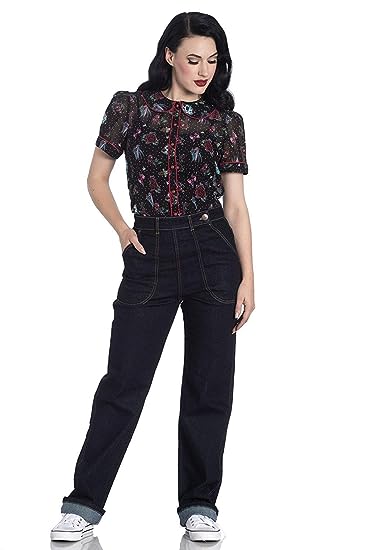 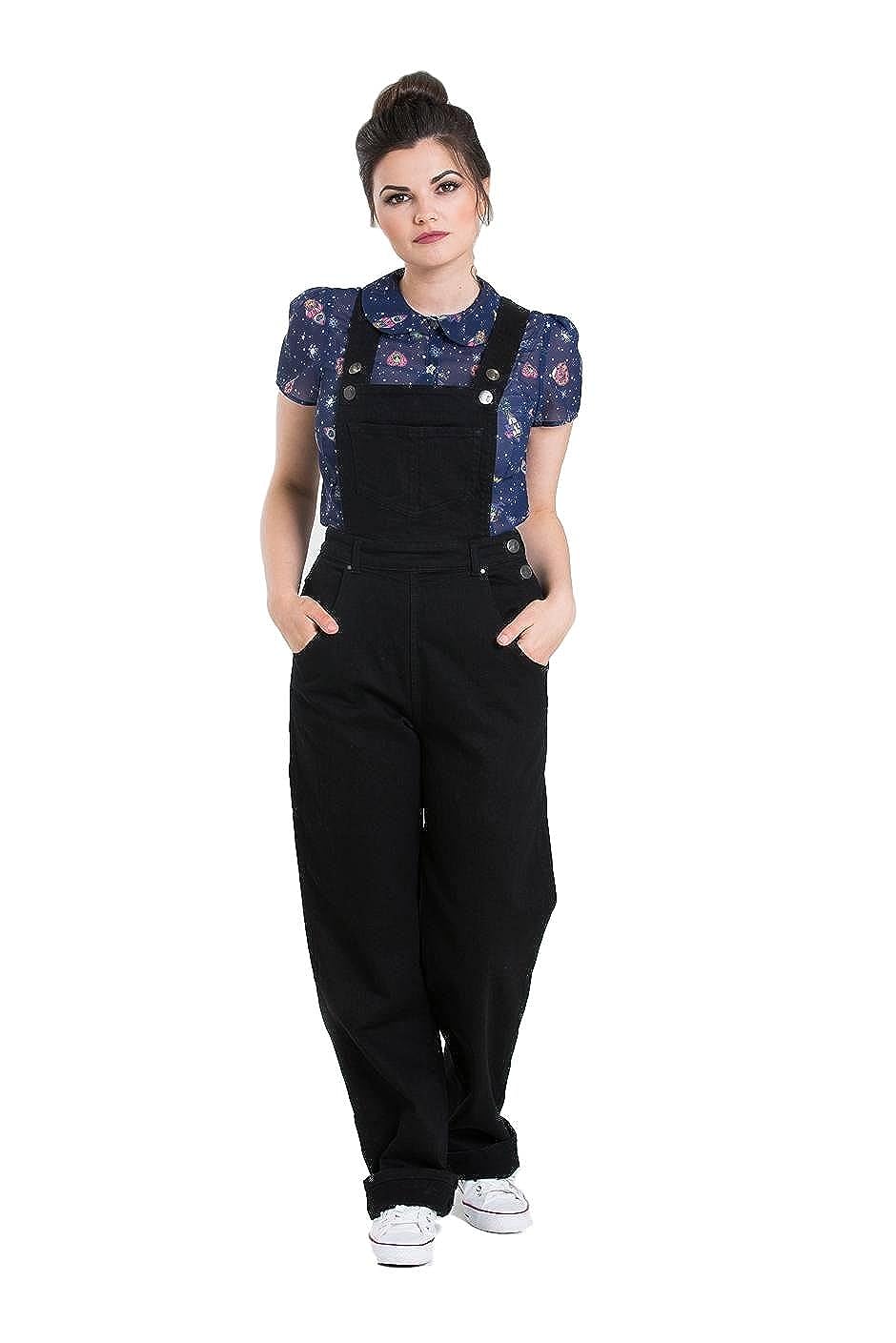 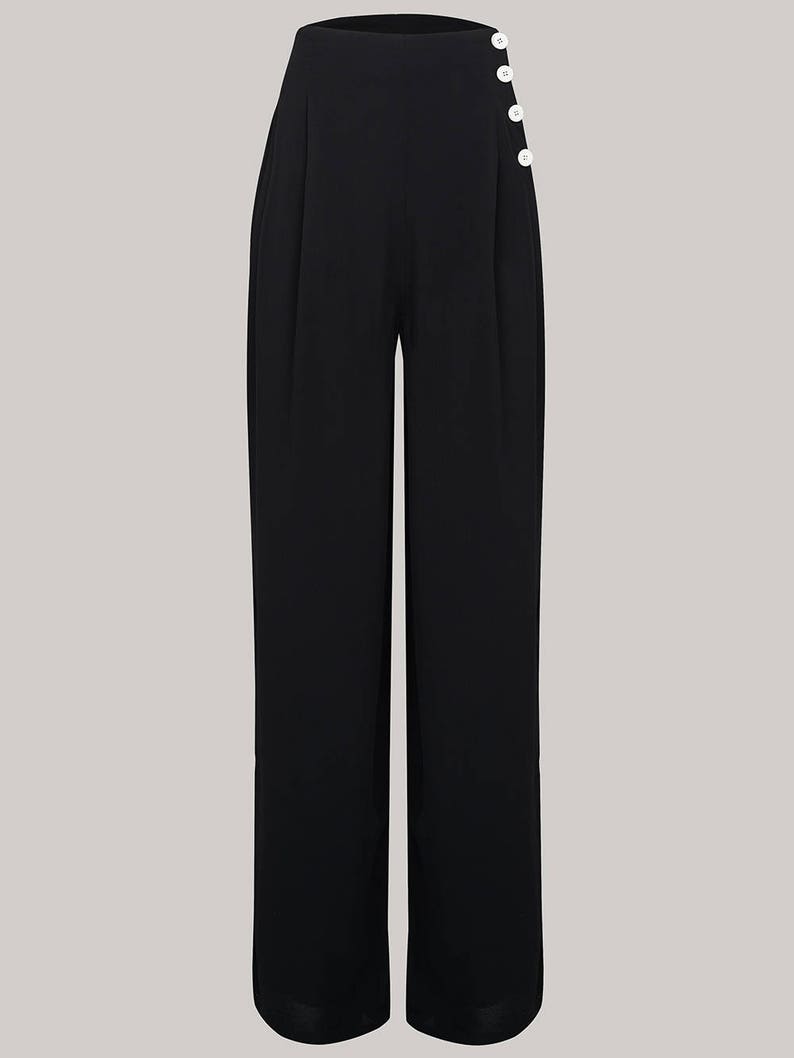 We are Debbie and Oscar, your guides to dressing up like decades past. We are here to help you find clothing online and learn about vintage fashions as worn by everyday people, just like you. Need help with your outfit? Ask us anytime.
« 50 Vintage Inspired Clothing Brands & Stores
1950s Pants History for Women »