Women in the 1950s were the first to really enjoy the freedom of wearing pants as acceptable women’s clothing. While the women in the 1940s loved their men’s inspired slacks, they were gradually losing favor in the 1950s for a more ladylike style. Women’s 1950s pants were taboo on TV.  Lucille Ball and Vivian Vance wore pants them from time to time on I Love Lucy in the early 1950s. But it wasn’t until Mary Tyler Moore was frequently seen wearing them on The Dick Van Dyke Show starting in 1961 that women acknowledged they wore pants. 1950s women were secretly wearing pants at home, but it wasn’t until they were prominently seen on TV that they felt comfortable wearing them outside of the home, too. There are two styles of pants that the 1950s are most known for: capri and cigarette pants. Capri pants get most of the attention, but it was the cigarette pants that were worn more often. Cigarette pants had high waists, side or back zippers, flat fronts, wide waistbands (3 inches), no belt loops, full hips, and were slim fitting through the legs. They ended at just above the ankle bone. Wide leg 1940s pants were still worn into the early ’50s as well with a more tailored fit, higher crotch, and flat front (no pleats).

Good wool or cotton 1950s pants were always lined. Having baggy knees was taboo, so lining helped keep the leg straight and wrinkle free. It wasn’t uncommon for wool to stretch out of shape or linings to bust open with frequent knee bending. An outwardly perfect, good pair of pants could be ruined by a shredded mess on the inside.

Cigarette pants usually came in black. Brighter colors were reserved for capri pants and sport shorts. In the later 1950s, more patterns like polka dots, checks, stripes, and leopard prints appeared on casual cigarette pants. Cigarette pants were sometimes worn with a thin leather belt placed in the center of the waistband. Belts and belt loops were considered too masculine. A smooth, high waistband was more flattering on the cigarette pant. Pants in the 1950s were called ‘capris.’ Not pants, not trousers, just capris. This is confusing today, since we tend to call cropped pants capris and full length pants ‘pants’ or ‘trousers.’ In the 1950s, capris were usually black. Capri pants fit like cigarette pants, except they ended at mid calf with a slit on each side. Every woman a had a few pairs in her wardrobe.

“Black capris were the answer to most casual what-to-wear problems.” – What to Wear

Black matched all colors easily, but they were especially popular with striped shirts. Striped knit shirts were called Italian or Roman shirts. A red and white shirt with black Capris certainly looked very Italian. Pairing it with blue pants gave a nautical look, like summer clothes on the Italian Riviera. To look European was a big deal in the ’50s. Another ethnic style was borrowed from the Spanish matador. Black capris paired with a white ruffled blouse, a Spanish cummerbund, and an optional bolero jacket put the capri into a slightly more formal category. Adding a bi-corn hat put it even closer to a costume look, but women didn’t care. Mixing any of these elements with dresses and suits turned one outfit into many.

Add a wide white belt over black capris and a colored blouse, and the outfit was exactly like what fashion icon Audrey Hepburn would wear. Capris took on other names as different lengths created new styles. Clam diggers or toreador pants were mid calf length pants with wide, cuffed, pant legs. Pedal pushers were another ‘in between shorts and pants’ style. They came to a few inches below the knee and fit loosely, but not baggy. They had the classic high waist and a sharp pleat down the front of the leg. Manufacturers came up with many different names for these 3/4 pants, such as Motor scooter slacks, calypso pants, and pirate pants. Learn more about 1950s shorts here. 1956 capri pants in black and a harlequin print

1950s Jeans for Women and Teens Denim jeans, also called dungarees, were not quite as form-fitting as pants and capris. They were made of heavy dark denim and lined with a vibrant plaid flannel that fit high on the waist, wide over the hips, and tapered down to the ankle or rolled up to a wide cuff at mid calf (Capri length). Extra large pockets were a carryover from the 1940s, but this time the trend was to outline them in contrast stitching.

Adding decorative trim to pocket openings that matched the lining exposed on cuffs was an extra bit of fashion, too. They were only worn for the most casual of at home occasions or on a rustic vacation, like camping. Teenagers developed their own style with pants. Teens, of course, might rebel and wear jeans out with friends on a Saturday afternoon, but never to school. They also liked them a little tighter. The classic outfit was jeans with a white or plaid blouse, thick white bobby socks, and a pair of loafers. Extra loose pants in the early years and extra slim pants worn with ballet flats, short cropped hair and very baggy “Sloppy Joe” sweaters in the later years created a bohemian artist look. Naturally, parents hated the style. In Europe, Teddy Girls mimicked this style with rolled cuff baggy jeans, flat shoes, black knit shirts and long blazers. The ’40s and ’50s obsession with all things Western life extended into women’s pants. Not just for riding horses anymore, women living the western California lifestyle wore western motif slacks and western shirts as everyday casuals.  They appeared in the same cut as other women’s slacks, with a tapered leg from hip to ankle. The western style came in with wide belt loops (and a western leather belt), white piping on the pockets, and sometimes rhinestone decorations for a fancy Western flair.

‘Wrangler’ brand jeans made their mark on ’50s fashion. Heavy “blue bell” denim jeans featured a ‘wrangler’ front fly (oh my!). Large pockets on the back, and a smaller change pocket on the front that was mostly for looks. Classic Wranglers today don’t differ too much from the 1950s style. 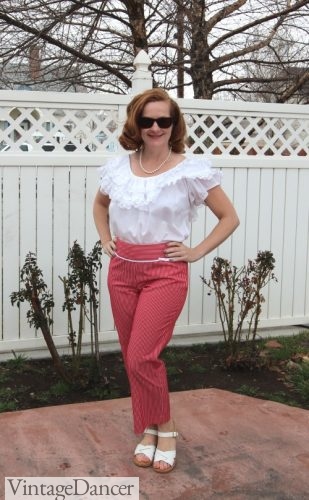 Fortunately, 1950s style pants are in fashion again. While capris are a summertime staple, high waist jeans are now also making a comeback. Plus, there are many ‘50s reproduction clothing brands that are making pants, capris and jeans, too. My favorite place to find ’50s style pants are with brands that target mature women.  They are usually high waisted, side zipping, colorful capris and slacks that look nearly identical to vintage ’50s pants.

I gathered up many of these 1950s inspired pants styles on the 1950s style pants shop page here:

We are Debbie and Oscar, your guides to dressing up like decades past. We are here to help you find clothing online and learn about vintage fashions as worn by everyday people, just like you. Need help with your outfit? Ask us anytime.
« 1940s Pants History- Overalls, Jeans, Sailor, Siren Suits
New 1920’s Beaded Flapper Dresses by Wear Dreams are Made »