Today’s article will explore styles of Old Hollywood dresses and the new gowns inspired by this iconic time. Perhaps no other era in the history of film has held as much influence as Hollywood’s Golden Age. From Rita Hayworth’s Put the Blame on Mame gown, to Marilyn Monroe’s shocking pink dress in Diamonds are a Girl’s Best Friend, old Hollywood produced a plethora of fabulously memorable styles. 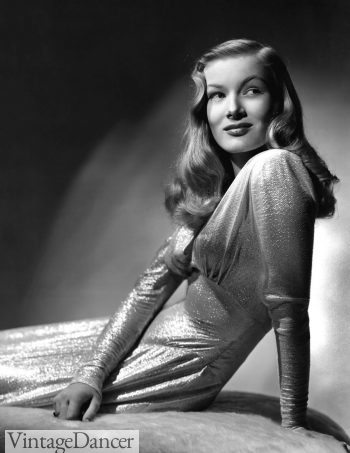 Veronica Lake sizzles in ‘This Gun For Hire’. 1942

When it comes to glitz and glamour, the styles of classic Old Hollywood definitely fit the bill. The medium of film has become an almost universal language, reaching recognition and influencing cultures across the globe. Of course, the visual language of film would not be complete without clothing and costume. While movie directors, film studios and their actors all received accolades in abundance, the masters of costume design were less likely to receive such acclaim.

Fortunately, we now have specific awards and categories to recognize the talents of costume designers in film. As to when the actual Golden Age of Hollywood commenced (and ended), is very much a matter of opinion. Some say the Golden Age started with the end of the silent movie era, others root its beginnings in the 1930s. Generally, the time period of 1930 to the late 1950s is thought to be the key era of old Hollywood. By the 1930s, Hollywood had established a number of studios. These studios were producing movies audiences could find an escape in, perhaps away from the reality of daily life and the effects of the Great Depression. Since the film industry was at this time still relatively new, censorship and ratings had yet to be enforced. The Hays Code was adopted in 1930, but not rigidly adhered to and enforced until a few years later. The Hays Code was a set of rules and restrictions, setting out guidelines as to what was (and was not) appropriate to be seen in movies. Movies of the period from around 1928-1933 were not restricted by the code, and therefore today attract a fan base of Pre-Code Movie fans.

While daywear fashions of the 1930s were simplistic in cut and practical yet demure, evening gowns were unabashedly glamorous. Perhaps no other era quite epitomized glamour as the 1930s did. The female form was celebrated, clearly outlined in gowns of thin, tactile silks. The bias cut clung to every curve, shoulders and backs were exposed – evening gowns of the 1930s were sensual delights, displaying yet concealing the form simultaneously. The Art Deco influence was strong in the 1930s with many Art Deco dresses reflecting this art and design movement. 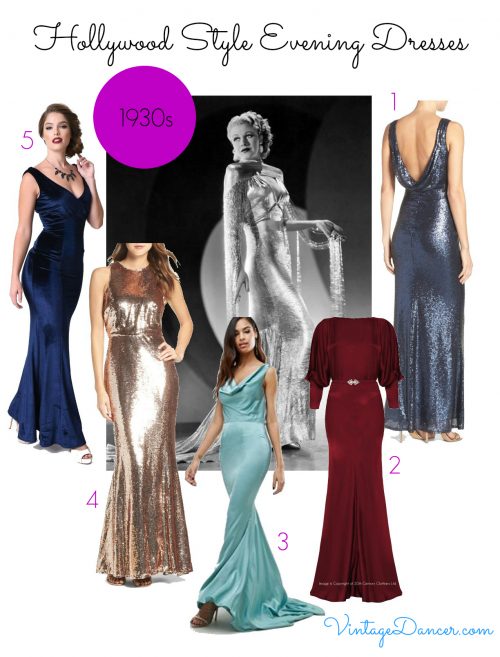 Create a 1930s style with these old Hollywood glamour dresses Evening gowns of the 1940s moved away from the unstructured styles of the 1930s to a more defined silhouette. Lingerie of this period created a gentle cone shape in the bustline, as opposed to the diaphanous styles of the previous decade. Due to advances in technology allowing more structure to be utilized in lingerie, we begin to see strapless styles becoming fashionable. In the 1946 movie Gilda we see Rita Hayworth singing in a strapless gown, complete with matching opera gloves. Old Hollywood gowns of the 1940s could feature various bodice details – including cut out sections to expose the waistline, gentle pleating across the bustline, or plunging V necklines. All of these features would be teamed with a long skirt. The skirt portion of the evening gown may be straight, as evidenced in Rita Hayworth’s Gilda gown, or full to create movement.

Where sleeves were employed, gentle shoulder pads were also utilized. This reflected the general fashion of the decade’s trend of a strong, masculine influenced silhouette. Unleash your inner screen siren with this selection of Hollywood glamour dresses for sale. Evening gowns of the 1950s seemingly had no limits when it came to embellishment and visual impact. After the rationing and hardships of WWII, designers and couturiers were suddenly allowed to once again explore all manner of creative possibilities. By the 1950s, Dior’s New Look became an accepted line of fashion. Nipped-in waistlines served to enhance the juxtaposition of voluminous full skirts. This gown Grace Kelly is seen wearing perfectly epitomizes the femininity and glamour of the 1950s.

Some of the most memorable gowns of the period include Marilyn Monroe’s Diamonds are a Girl’s Best Friend gown, worn in the 1953 movie Gentlemen Prefer Blondes. The gown was designed by William Travilla, and presented Marilyn almost as a confection, waiting to be unwrapped. Incidentally, the crystal-studded gown Marilyn wore to sing “Happy Birthday” to John F Kennedy recently sold at auction for $4.8million. View the gown here.

Many female stars of the era evoke the classic Old Hollywood style. Audrey Hepburn wore creations by Givenchy, not only through many of her films, but also to accept her Oscar award in 1954 for ‘Roman Holiday.’ Givenchy’s designs perfectly suited Hepburn, with their classic understated-yet-fashionable silhouette. If the 1950s are more your style, how about this selection of vintage inspired gowns?

To recreate a 1950s influenced Old Hollywood style, look out for formal dress styles with structured, defined bodices. Full skirts billowing with yards of fabric were also a quintessential element of the 1950s look. Complete the look with accessories – gloves, a matching purse, shoes, and of course sparkling costume jewelry! Opt for black accessories to add understated sparkle and glamour to a Hollywood inspired style. As movies became available in color, this opened up new possibilities for costuming. Red in particular stood out on the screen, evoking danger, glamour, and sensuality. Even modern-day movies acknowledge the influence of Hollywood’s Golden Age – who could possibly forget Jessica Rabbit in her show stopping red gown of 1988s Who Framed Roger Rabbit? Be the belle of the ball in these fabulous Golden Age of Hollywood style gowns. Of all the red old Hollywood glamour dresses available to buy, perhaps this one from Top Vintage is the most show stopping!

To create an impact, red is a perfect choice. Choose from this selection of old Hollywood glamour dresses and accessories to recreate the perfect vintage inspired style. With so many old Hollywood glamour dresses available to buy, you are sure to feel a million dollars on your very own red carpet.

We are Debbie and Oscar, your guides to dressing up like decades past. We are here to help you find clothing online and learn about vintage fashions as worn by everyday people, just like you. Need help with your outfit? Ask us anytime.
« Vintage Inspired Party Dresses
1900s Edwardian Men’s Clothing, Costume & Workwear Ideas »