In the 1920s, men were almost always wearing a hat. While the trend faded with the young collegiate men, the hairstyle for both hatted and unhatted men were the same. The look was for flat, slicked, shiny, medium length hair. The helmet like appearance of men’s hair produced a few nick names for the style such as “Patent Leather” hair or “helmet head.”

What we might call “hat hair” today would have been the style to wear throughout all of the 1920s. Only minor changes occurred in men’s hairstyle during the decade. 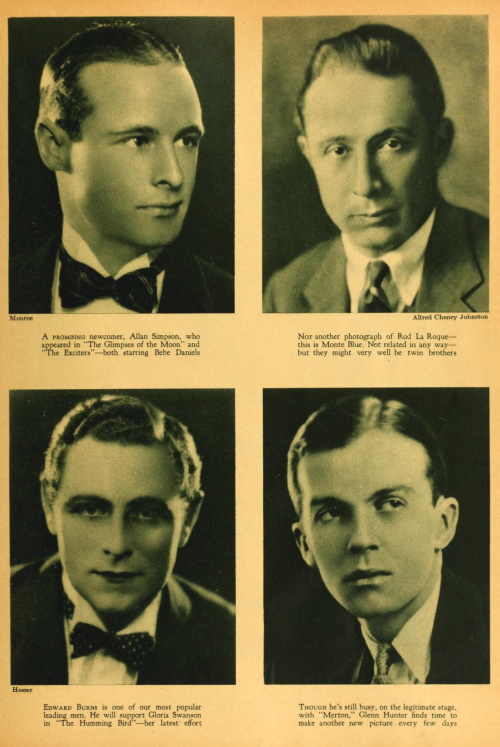 Men’s hairstyles first had to reach the right length. In order to have enough hair to slick back, hair length needed to be about five to seven inches, or enough to reach back over the crown of the head but not too long as to stick out past the crown. If the man was parting his hair on the sides, the lengths were a bit shorter. 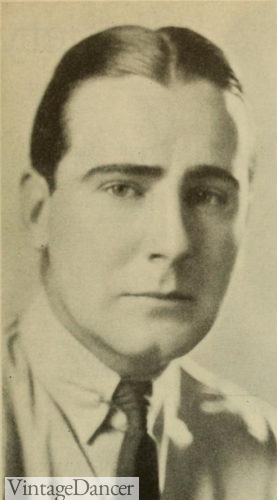 Regular trips to the men’s barber shop (which by now is running amok with women bobbing their hair) were necessary to keep the length in check, the sideburns high and the back of the neck clean. A barber also gave men a hot towel facial and fresh shave. To get the slick look, a product called Brilliantine was used. It was oil based, giving off a slimy residue to anything it touched. Homemakers knit lace doilies to cover the backs of high back chairs and couches to protect the furniture from men’s greasy heads. These household protectors continued to be popular into the 1940s and 1950s when sticky wax pomades replaced the light oil brilliantine. The 1920s version was not meant to hold a shape so much as smooth and flatten. Poor men would sometimes used cheaper petroleum jelly instead of the luxurious brilliantine. It did the job, although it was a mess to clean up. Once thoroughly oiled, a man would then part his hair in one of three popular ways.

2. The second option was parted directly in the center or slightly off center- whichever parting was most handsome.

3. The third option was a deeper part on one side. It was common during the teens and less common going into the ’20s, but sometimes a necessary style for men with thinning hair – AKA the comb over. It was also more flattering on a round face. If you area  fan of Peaky Blinders or consider yourself a hipster, you may wear the half crown.  Hair tops were trimmed neatly with only a few inches hanging straight down. The sides were cut very close with an electric shaver, tapering slightly to above the ears.

The short pompadour was a similar cut achieved with electric cutters but the top hair was only an inch or two on top, combed straight up. The high sides and back with trimmed very short.  You might call this a buzz cut or military cut today. The Half Crown or short pompadour Having straight hair made it easier to achieve the ideal 1920s style. Men with some wave and fullness worked with the natural hair and created styles that were waved on top, usually with a small side part, and brushed to the back. The sides were short and brushed downward and slightly back. Men with curvy or wavy hair had the choices of straightening the hair with hot irons (usually only used in the movie industry) or with lots and lots of heavy oil. Most curly haired men with a bold personality let their curls bounce free with only a light layer of brilliantine to smooth back fly-aways and provide soft shape. A hat did a pretty good job of laying curly hair flat too. Actor Ralph Forbes with a full head of wavy curls that were sometimes ironed straight for the movies.

Curly and wavy hair could be parted in the center, to one side, or with a deep side part. Sides were tapered short and close to the head but usually not “shaved.” The opposite problem of thick curly hair was the man with thinning, balding or no hair. What little was left was still combed back with a light layer of brilliantine to add shine. If a man was bald, he could either get a toupee or just wear a hat. Many mature men began wearing mustaches to counter balance the lack of hair.

Lack of hair on an older gentlemen was not a shunned thing. It was a sign of age, wisdom and respect. Little changed from 1920-1929. The most notable difference is the reduced use of Brilliantine. Men still used it but in less quantities. A fuller, even finger waved, set of hair with a light splash of Brilliantine matched those of the ladies who finger waved their hair into works of art. My husband has thick curly hair that is a bit too short to fit the ideal 1920s mold, yet we make do with what we have and the result is pretty good. Here are some tips on products and styling we have learned:

1. Before applying any kind of holding product, wet your hair down. Gently swipe, not rub, off excess water from the forehead, over the crown and to the back of the head. For thick hair let it dry 5 minutes so that it is damp, not sopping wet. For thin hair, don’t wait – apply product right away. 2. Hair products – There are so many men’s and women’s hair products out there I am not even going to list them all. Holding products- you can use them but you don’t need to. Use an oil based serum, such as Three Flowers Brilliantine Liquid. The look will be more authentic if you do, but it’s a mess! Skip the expensive stuff and just use coconut or jojoba oil  to grease and shine. Olive oil works, too, but has more odor than coconut.

If you need more hold, regular old Vaseline petroleum jelly works well without the smell of dripping oil. You can also use a gel or wax based shine pomade such as Axe Shine Pomade (this is what my husband uses). Comb it into the shape your hair will look best in. For extra smooth flat hair , use a soft brush instead of a comb for the last few swipes. Comb lines were not favorable in the ’20s.

3. Finish – If you are going to oil your hair with anything, I recommend you plan NOT to wear a hat. Save your nice hat and just wash a shine  shampoo or dust your hair with a shine spray such as Garnier Fructis Style Brilliantine Shine.

Note: While men’s hair product lines are expanding you may still have better luck shopping in the ladies’ hair section at your local drugstore. Better yet, the ethnic hair section has the best smoothing products, oils, and curly hair treatments.

Thanks to the invention of the new safety razor by Gillette, men were enjoying shaving again. Except for the ultra-thin mustache sported by heartthrob movie star Rudolph Valentino, men were not wearing full facial hair in the 1920s. To wear a beard was a sign that he was hiding something, such as old scars from a smallpox outbreak. 1920s society was obsessed with sanitary conditions and good health. To hide under hair was to appear unsanitary.

Some older men continued to sport a mustache. A few young movie stars also wore a mustache to create a unique signature look. Men’s cologne was not part of grooming in the 1920s. It didn’t become common until the ’50s and ’60s. Instead, a few men decided to dab a bit of ladies’ perfume under their suit lapels. Subtle yet present. Men were just supposed to smell manly and that was it!

Do you have a hair-styling technique or product that works for you? Leave us your tips in the comments below.

We are Debbie and Oscar, your guides to dressing up like decades past. We are here to help you find clothing online and learn about vintage fashions as worn by everyday people, just like you. Need help with your outfit? Ask us anytime.
« Authentic 1920s Makeup Tutorial
7 Vintage Family Christmas Photo Ideas »