Men’s 1930s underwear followed the same trends in men’s swimwear. Since both knit swimsuits and knit underwear were made by the same manufactures, this makes complete sense.

Muscular men wanted swimwear that showed off their toned and sculpted bodies. Eventually they left the swim top off for a bare chest and short-shorts look. Same for men’s underwear. Body coverage reduced and the fit became closer so that men could feel the ease and comfort of “sporty” underclothes. In 1936, the Jockey Y-Front brief had built in support that promised “a no gap front opening.” It also had a flexible Lastex waistband instead of a traditional sewn waistband with button closure.  Other manufactures quickly copied the designs, coming up with their own comfort briefs. Boxer shorts were the preferred underwear for men in the 1930s. For most of the thirties, the dominant style was a yoke-front band with gathers at the back and three buttons above an open fly at the front. Metal “snaps” replaced easily broken buttons on some models. Then came the Lastex waistband without an open fly.

The “French Back” boxer featured two tabs and buttons on the backside instead of gathers or elastic. The seat was very roomy.  Some boxers had pleated legs for even more roominess up front. 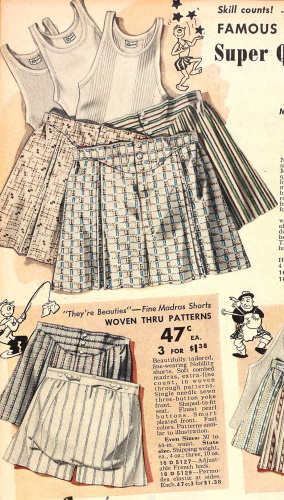 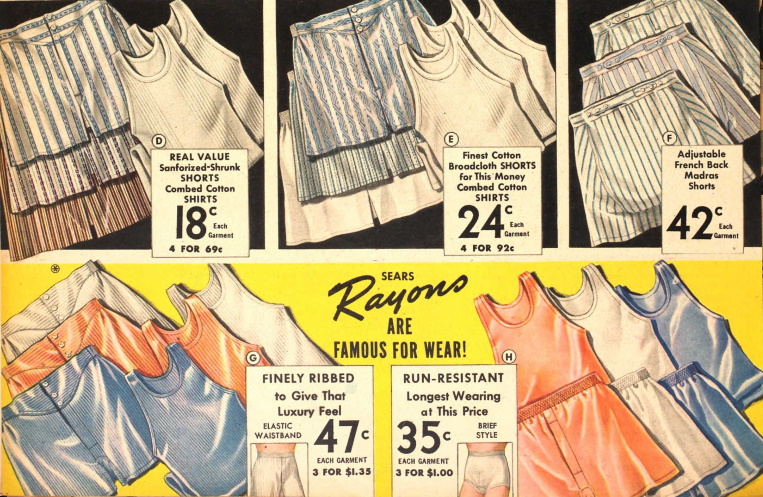 The tank style undershirt was the most popular style in the thirties. Like the swimsuit top, it had very deep arm circles, thin tank top straps, and a deep round neck.

When Clark Gable removed his shirt, exposing his bare chest in It Happened One Night (1934), undershirt sales took a deep nos dive. Men experimented with going without undershirts but ultimately found them necessary. Sales returned to pre-1934 levels a few years later. Combed cotton (ribbed) or cheaper lisle fabrics were worn in summer. Heavier cotton and wool blends were better for winter, although most men turned to union suits instead of sleeveless undershirts.

T-shirt style undershirts, called Gob shirts, began to appear in the late 1930s. They could be worn as undershirts or as sport shirts. They had a wide round neck and short but loose sleeves. The traditional Union Suit (Long Johns) with long or short legs and sleeves was still worn by many men in the 1930s. Winter Union Suits had long legs and long sleeves, with a long button plaquette down the front. They came in white or cream, but grey was the newer thirties color. Summer union suits had the look of a onesie or wrestling suit, with a step in design and thin straps. They could button down the front or had snaps on one sleeve/strap for easy on-and-off access. Short sleeved union suits with a wide cuff were made with short and long legs too. 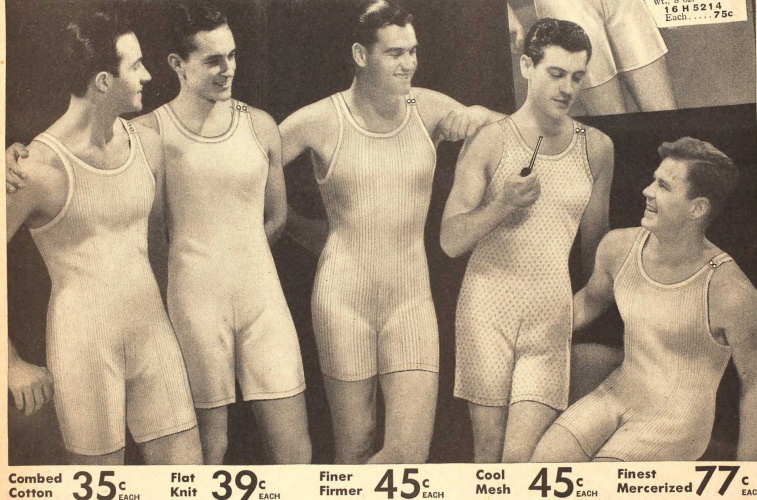 Union suit separates looked like a Henley shirt paired with yoke top long john pants, called drawers. The Henley style shirt could also be worn with boxers, although I have yet to see this illustrated. 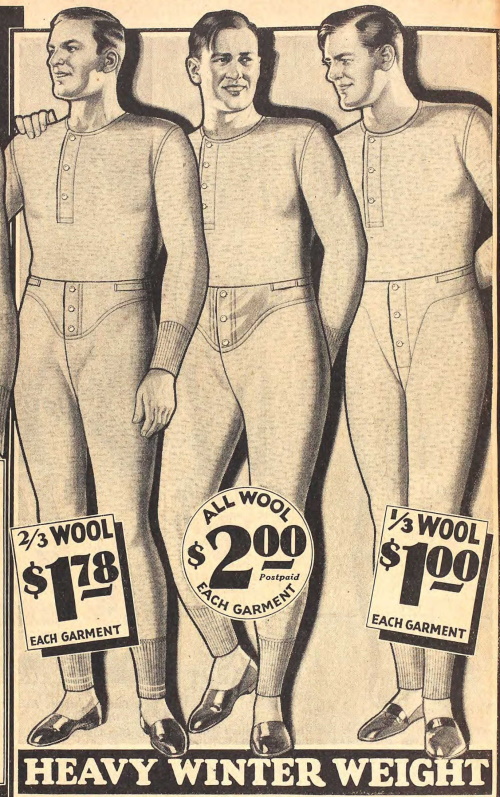 Look here for vintage and classic styles of men’s underwear and union suits.

We are Debbie and Oscar, your guides to dressing up like decades past. We are here to help you find clothing online and learn about vintage fashions as worn by everyday people, just like you. Need help with your outfit? Ask us anytime.
« 1950s Men’s Underwear History
1910s Men’s Hairstyles & Trends »