A hat wearing gentleman of the 1940s continued the tradition of wearing most styles of hats from the 1930s. The classic fedora, homburg, and flat caps were worn with only subtle adjustments in style. The Derby or bowler was still worn in Britain by some from the generations, but the overall trend was for more casual styles and colors. Most trends started on collage campuses, moved to the country, and finally made their way into the city. The newer hat of the 1940s was the Pork Pie, and it carried on in fashion through to the 1950s.

Stylistically, the main difference between hats of the 1930s, 1940s, and 1950s was how they were worn. Most hats of the ’40s were worn tilted to one side. Hat brims took on many shapes, with the back brim curved upwards being the one common feature among many styles of 1940s men’s hats for sale.  The width of the brim was quite wide in the early ’40s and widened  again at the very end of the decade. with the middle years reducing a little. The material was also lighter, especially felt, which was no longer very heavy but softer and more comfortable to wear. This lighter hat also reduced the cost of material, making them more affordable after the war. Most men shopped for a hat from a local haberdasher. The shop owner would advise the customer on the shape of hat that suited his face, body build, and fashion style. He would then take a blank hat and shape the crown and brim to perfection. A hat was an investment — something to be worn with pride, taken care of, and treated with more respect than any other part of his wardrobe. A good straw hat lasted a year or two. Many straw hats only lasted a few months, requiring frequent replacement. Thankfully, they were much cheaper as well. Unfortunately, hats were beginning to experience a downward trend after the war. Casualness in men’s fashion was becoming more and more common to the point most hat wearing was done for leisure activities, sports, and blue collar work. Business men wore hats, too, as they had done for the last several decades, but the younger generation was not keen on the concept. They had nicely combed hair. Why cover that up with a hat? Or deal with the hassle of storing it, taking it off inside or while driving, and not losing it to a hat stand thief? They complained that they were uncomfortable, giving them headaches, and were perhaps unhealthy, too (hats + sweat = acne). They also cited hat styles as old and boring. A young newspaper writer, Sydney J. Harris, in 1944 said that he and his friends “resented the bland uniformity of the dumb-looking hat.” The young wanted something completely new, or else nothing at all. Another reason for hatlessness was improvements to indoor heating and heaters in cars, They made wearing a hat in winter unnecessary. By the late 1940s, only about 40% of men were wearing hats on a daily basis. The rest simply went out without a care in the world.

Since hat wearing isn’t common anymore, putting on a 1940s hat seems necessary when dressing vintage. Determining what hat to choose begins with an exploration of men’s 1940s hat styles: 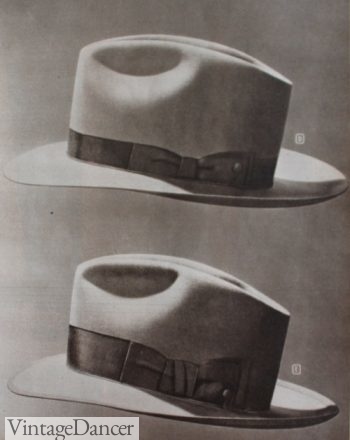 Most men’s hats were just called felt hats, not by any specific name. Of all the variations, the fedora hat was the most common, and in general most felt hats fit the style of the fedora. It featured a snap brim that curved down in front and up in back. The tall center crown had a crease that was either flat or sloped toward the back. The front of the crown featured a pinched indentation on either side.  The finish of the felt was usually smooth, but some styles did have a light fur texture and even very heavy fur in cold areas.

Brim sizes varied through out the decade. The average sizes was 2-5/8 inches, but brims ranged from 2-5/8 to 3 inches. Small faces needed small brims; larger faces needed wider brims. Crowns were also tall but had shrunk down an inch or so for most of the 1940s. The homburg hat gained popularity beginning at the turn of the century and in the 1920s. It was a more formal style than the fedora, with a deep center dent and rolled brim edge. It was only worn with nice business suits. 1947 Fedora hat at top and homburg hat at bottom

The pork pie was a hybrid between a felt hat (fedora or homburg) and cloth summer hat with a round brim and flat round crown. They became popular on college campuses, first emerging in a khaki summer color with colorful band. Summer hats usually had a crown that was a little taller in the front with a mild slope to the back.

The felt version was worn with business suits and semi casual dress. They were the least common felt hat style. 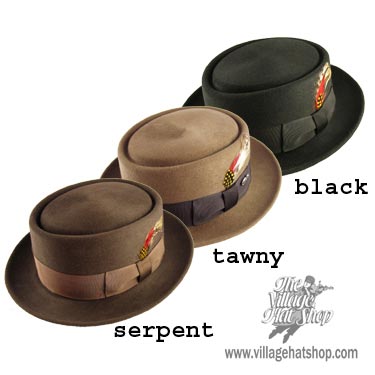 From May to September, men wore summer hats made of straw. They came in all the shapes that felt hats did and in a variety of weave materials such as coconut palm, sennit straw, watersilk palm, cocoa baku, banana palm, and hanoki. Some classic shapes were boater, Panama, optimo Panama, pork pie, fedora, and sloped fedora. A casual, sporty summer or work hat was the bucket cloth hat. It was first worn on golf courses before being picked up by young college kids and men living in the country. It had a floppy snap brim and side air vents. Popular colors were khaki, green, blue, and brown. As a work hat, it often matched the color of the work uniform. They were made of cotton twill, rayon, gabardine, or corduroy.

In winter, the hat came in a lined cotton twill with attached ear flaps. Another sport-to-work hat was the classic cap. Just called a cap, dress cap or work cap in the 1940s, it now has many names today like flat cap, newsboy, ivy cap, Big Apple cap, and more.  The traditional cap was made of 8 triangle panels sewn together in a circle and snapped to a short front visor.  It could also be sewn from one piece of material, called a one piece crown. Caps were rather flat in appearance, unlike the fuller 1920s version, and they came in tweed, cotton gabardine, or wool. Solid colors such as blue, grey, and tan were for summer. In winter, tweed-like blends of speckled grey, dark blue and brown were common.

Flat caps were worn with casual clothing, sporty attire, driving, and working labor jobs. They were still worn on golf courses and other outdoor sports, but otherwise were mostly associated with working classes. Other styles of caps were worn for rugged outdoor sports, like hunting and fishing, or for extremely cold climates. These hats had a visor like a baseball cap and ear flaps that tied up on top of the head or over the visor when not in use. They were fully lined in warm cotton or shearling wool. The outside was usually corduroy, leather or a plaid blanket cloth. Beige, brown, black, dark blue, or red plaid were common colors. Whenever possible, buy a vintage men’s hat (eBay or Facebook groups). They can be pricey to buy, but well worth it if you want the most authentic 1940s hat. Otherwise, new men’s hats continue to be made in vintage styles. Quality fedoras often come with flexible brims so that you can change the brim shape to match that of 1940s style.

You, too, can buy a new 1940s style men’s hat with or without a shaped brim. Most modern fedora hats have smaller snap brims that were not worn in the 1940s. They are also usually black, which was not a very popular color, even for gangsters. Dark grey with a black band is your best choice to wear with suits. Brown is good for brown suits or semi-casual clothing. You could also stand out with a blue or green fedora hat.

We are Debbie and Oscar, your guides to dressing up like decades past. We are here to help you find clothing online and learn about vintage fashions as worn by everyday people, just like you. Need help with your outfit? Ask us anytime.
« My Shabby Apple Swing Dress
1950s Men’s Hats Styles Guide »