Summertime is beach season, and that means shopping for bathing suits has begun. Last season, I saw a continuing revival of ’40s and ’50s swimwear. This year, the 1950s and 1960s swimsuit styles are taking center stage in the vintage, indie, and contemporary fashion world. So let us take a walk down memory lane and revisit 1950s swimsuit and bathing suits styles and see how they have come back around today. American 1950s swimwear designers were most notably Clair McCardell, Tina Leser, Tom Brigance, and Carolyn Schurer. Brand names were Cole of California, Jantzen, Rose Marie Reid, Elizabeth Stewart, and B.V.D. Some catalogs like Sears and Montgomery Ward also had their own lines of swimwear, although the selection was small. Lane Bryant specialized in plus size swimsuits that favored dark colors, modest coverage, and the swim dress style.

The fabrics used for 1950s swimwear were greatly improved in the ‘50s. Nylon and elastic were added to jerseys to up the stretch and make suits dry faster after a dip. Then came improvements to Lastex, a rubberized material developed in the 1940s. This combined with acetate, taffeta, and cotton created most of the swimsuits materials of the 1950s. One and two peice swimsuits

Bathing suits had a slightly knitted feel to them and considerable weight compared to today’s thin fabrics. An effort was made to make smoother fabrics that hugged a woman’s curves but didn’t show any lumps and bumps. Bra tops were usually lined and many also had Pellon firmed bra cups. Some swimsuits were also boned in the chest area or on the torso (like a longline bra). Separate rubber swimming panties were worn under swimsuits to provide even more smoothing and shaping. Needless to say, the swimsuit was less about swimming and more about looking like a pinup. Swimsuit colors and patterns were bold compared to the floral heavy ’40s. Solid colors in black, red, pink, aqua, and white with contrast white or black piping were seen the entire decade. Popular patterns were plaid, gingham checks, candy stripes, and color blocking. Polka dots, despite their popularity today, were not common in the fifties. In the mid to late ’50s, the Artist’s print bathing suit was a novelty with designs that were painted onto one piece swimsuits. Tropical themes were a natural fit as were modern art flora and fauna. 1954 princess swimsuits (Bubble on the Right)

The princess bathing suit of the fifties was a classic sheath. The top usually had a sweetheart neckline with a very tight, short pencil skirt covering the front part of the bottom (sometimes this extended to the back as well). While most ads show strapless princess swimsuits, they were usually sold with removable thin straps in case a woman actually wanted to swim in it. The straps crossed at the back, keeping them from falling off sloping shoulders. They were removed for sunbathing. In the early ’50s, ruching was used on either the sides of the swimsuit, down a panel on the front or all over for maximum body shaping. This fabric trick created an optical illusion, hiding unsightly rolls and making the bathing beauty look slim. This technique is still used today (and it works wonders!). Some suits zipped up the back so that they could be extra form-fitting (or extra form-enhancing). 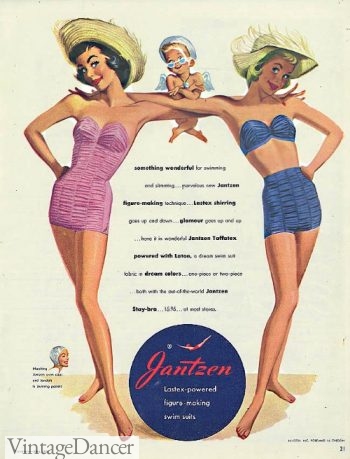 The bubble swimsuit was an unusual princess swimsuit with a puffy short instead of a pencil skirt. I can’t help but laugh whenever I see one and ask “what woman would want to wear that?” The ’50s were all about big busts and wide hips, so if you lacked one or the other, there was a swimsuit to help. The bubble suit didn’t go over too well with women. Instead, suit legs were trimmed in layers of ruffles, like bloomers or pettipants, and that did the same trick. Baby Doll swimsuits were shaped like the classic princess suit, but had short boy shorts instead of a skirt. This was very new to the ’50s. Playsuits and rompers were already one piece shorts, but to turn them into a swimsuit was finally acceptable in the ’50s. Most baby doll swimsuits had cuffs on the shorts, some also had small pockets, and others ruffles or piping trim. One trendy style had gathered ties on the sides of the legs. The baby doll top could be strapless, but many had wide flat straps, creating a look identical to ’50s playsuits.

There was a knit version of the baby doll swimsuit that started to take off in the late 1950s. Knitwear had been seen as “old” since that was the only option prior to the mid-1930s. Now it was back again in solids and especially stripes. Knit was very stretchy and prone to sagging in water, so most swimsuits were heavily boned and lined in a non-stretchy material. Some Lastex materials were textured to look like rows of knitting, but were not actually knitted. One charming baby doll suit was the empire waist swimsuit. It had a band or bow right under the bustline and either a baby doll bottom or ballerina skirt. It was mostly seen in the late 1950s, when many dresses also featured the empire waist with a flat bow. 1957, empire swimsuits on the left Ballerina swimsuits or swim dresses were a modest swimsuit style that was a carry-over style from the 1940s. The necklines were usually square, V-neck, or halter neck with straps and a circle skirt that swung loose around the hips. There were bloomer shorts and panties underneath, making it a 2 piece bathing suit. It could also be a one piece with panties attached to the inner lining. Decorative trim was added to the bust line, keeping the focus up top and not down below. It was a popular style with mature and plus size women. A more youthful style of swim dress tightened in the waist and added a short, ruffled skirt to the mid hip, creating a real ballerina tutu skirt. They could be one piece swimsuits or two pieces. Youthfulness came into play with novelty prints like fruit, animals, dots, plaid, checks, and bows. 1950s Swimsuits for teens – Ballerina swim dress on the right

The bikini, a two-piece 1950s bathing suit was also an option, although the one piece swimsuit was preferred by far. A bikini didn’t reveal much more than a one piece anyways. The bottom half was the same as the one piece sheath suits, often with ruching. The bottom came all the way up to the natural waist (no belly buttons to be seen!) The top was often a strapless bra-top or tube top, sometimes with halter ties coming from the center. The front was rounded and sometimes had a twist or bow in the center. Bikinis were accepted on European beaches years before American morals allowed them at public pools. 1950s bikini swimsuits and cover up Swim caps came back into vogue in the ‘50s after the scarcity of rubber and other materials in the ‘40s made them rare. They were mostly worn by synchronized swimmers, a popular leisure sport for women. Bright colors and textures were popular. Of course, swim caps had to match the swimsuit!

Rubber flowers or petals could cover the entire cap, or they could be printed with polka dots and other cute patterns. Some came in unusual shapes such as the pineapple cap below. The bubble cap was a wavy textured foam cap with chin strap. It and the flower petal cap remain classics (my mom still uses one). When not in the water or while sunbathing, women turned to summer hats and sheer scarves to keep from burning or developing windswept hair. Long chiffon scarves wrapped around the head, crossed under the chin, and floated behind. They did little to offer sun protection, but they were certainly glamorous — especially when paired with cat eye sunglasses.

Sun hats were a better option for outdoor activities. The wide brim straw sun hat in natural, white or colored (pink!) straw was the most practical hat. The low crown and round brim were in style with other hats of the 1950s. Some straw hats were modeled after Mexican sombrero hats, while the bamboo coolie hat was modeled after Chinese hats. We can’t discuss swimsuits without the matching cover up or beach robe. No modest woman would go to the beach or pool and walk around without a white, striped, or matching swim jacket. They were made of cotton and lined and partially lined with terry cloth. Some were a robe style with a belt tied around the waist. Others were a smock style that buttoned up at the neck and flared down to the thigh like a short swing coat. They usually had oversized patch pockets for holding sunglasses and perhaps a book. Some had collars and lapels or none at all.

The swim crop jacket was another option that didn’t last too long. It was fitted like a short dress jacket but made for beachwear in cotton or terry cloth.  It was more fashion than practical, but together created a summer-ready outfit beyond the beach. The 1950s bathing suit inspired the return of the one-piece suit’s popularity.  The two-piece high waist bikini comes in at a close second. Solid colors (black) as well as polka dots are always best sellers among pinups and retro swimwear fans. Vintage style swimsuits with ruching are some of the most body-flattering designs you can wear today.

I LOVE my Esther Williams ruched tropical print swimsuit that I bought at Unique Vintage, but I also have a cheaper retro two piece bathing suit I found on Amazon that isn’t bad either (beware busty gals, they don’t have built-in cups). Buying a vintage 1950s swimsuit is on my dream list, but the price for the best ones are..let us just say.. ouch! Luckily, there are many vintage-inspired swimsuits in all price ranges and sizes for you. Shop plus sizes here, two piece bikini swimsuits here, and all others below:

We are Debbie and Oscar, your guides to dressing up like decades past. We are here to help you find clothing online and learn about vintage fashions as worn by everyday people, just like you. Need help with your outfit? Ask us anytime.
« 1960s Outfit Ideas | Mod, Hippie, Casual, Housewife, Party
1950s Vintage Wedding Dresses & Shoes History »