1950s coats were beautifully constructed and varied slightly in styles, fabrics and design. Most coats were long, some coming all the way to the ankle and others just below the knee and others sat right around the hip. Typical fabrics included camel hair, wool velour, wool fleece, tweed, and fur or cashmere if you could afford it. Coats were often decorated with large buttons, belts or fur collars to add a little glamour to an otherwise simple design. Fur trimmings like beaver, lamb fur, astrakhan, and mink were all popular and a contrast lining on the inside was used to introduce interesting fashion features. 1950s coats and jackets usually were color coordinated with the rest of a woman’s ensemble. Shop for 50s style coats here. Coats were usually either very fitted, semi-fitted, or full and swingy. The full coat was the most common style, although there was not a strict name for this style. For that matter, coat was not a common name in the ’50s. Instead, they were called toppers or top coats. Duster coat, Pea Coat, Long Coat, Swing Coat, Pyramid coat, Princess Coat, and Bell Coat were all used to identify ’50s full fitting coats. Full coats had wide sleeves, a triangular shape, large cuffs, and collars and usually large buttons, too. They came in long (to mid shin) or short (hip lengths). As we know, the fifties are synonymous with full skirts, and dresses and skirts with a fuller bottom were easily worn with a coat that had a straight slim style. Also, after the war we saw a boom in births, so coats that were swing style were very roomy and worked well for women who were pregnant. This was one more step a woman could take to be out in public without “showing” too much. This was a radical step at the time. Much like the desired figure of the fifties, many vintage coats had belts that accented the waist and flared at the bottom. Sometimes known as the princess style, these coats were feminine and figure-hugging. Popular colors were royal blue, dark red, gray, hunter green, dusty rose, black, and tan. Some coat sleeves had wide cuffs at the end or large covered buttons to add some decoration. Coats had buttons up the front, usually from the waist to the neck or just from the chest to the neck, and collars came up high to protect the back of the neck. Coats without buttons were a wrap over style similar to a trench coat. Many coats added pretty details with contrast stitching or embroidery, self-fabric belts, and decorative elaborate buttons. Most coats conveniently had hidden pockets. Coat collars came in all shapes and sizes, and some were made of fur. The round over-sized “peter pan” or “puritan style” collar was especially popular on 1950s coats. It helped make coats appear childlike or doll-like, which was the goal for women’s 1950s fashion.

As for any well-groomed woman of the fifties, it’s all about completing the look. That meant winter stockings, coordinating gloves, a matching hat, and usually a leather purse. A fur muff was borrowed from Victorian and earlier times and became a fashionable accessory to wear with furs or fur-trimmed coats (See photo under 1950s Fur Coats). 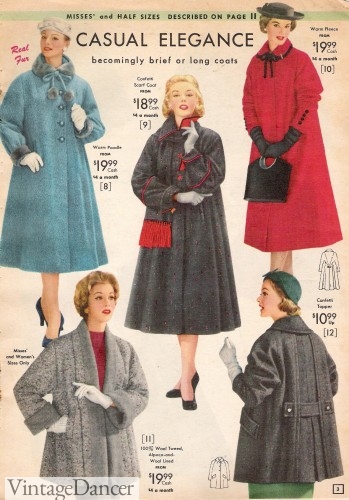 1957 Long Full Winter Coats and Half Coats with Matching Accessories The swagger coat was neatly tailored and fit close to the body through the waist before widening at the bottom. It is the most common style available in repro and inspired 1950s clothing. Depending on the desired look, it usually had buttons from the chest to the waist or could be double breasted. Large pleats on the back added extra room for movement that “swung” as a woman walked, hence the swing coat name. Sometimes with a belt and sometimes without, this style of coat was very flattering and mimicked the same hourglass shape that was popular at the time. The idea was to mimic the dress that was worn underneath the coat. It was also a style borrowed from Victorian ice skating coats.

In reverse, the coat dress was inspired by the swagger coat. It was a dress with double-breasted rows of buttons on the bodice and a full swing skirt. This style was only worn in the fall and winter. Read more about the coat dress here. Another style is the box coat or half coat, which is arguably one of the most iconic styles of the 1940s and ’50s. It hung very wide and straight, much like the shape of a box. They either hit at the bottom of a woman’s hips or went all the way to mid-shin. The 1950s versions often had a fuller shape than the 1940s box coats. Large pleats at the back shoulder line created a swing coat-meets-box coat look.

Collars, pockets and buttons were large. Most came in solid colors: ivory/cream, black, blue, red, or brown. The only popular pattern available was checks. Many coats that came as coordinated sets with dresses were not heavy winter coats. Instead, they were lightweight Spring and Fall top coats that came in many names such as Clutch coat or Tuxedo coat. They often did not have pointed collars, but instead folded shawl collars that ran the length of the long coat. They were made of lightweight wools, cotton blends, and new synthetics.

Unlike winter coats, sleeves were cut full but not wide, folded up to mid arm, and the amount of “swing” at the back was minimal so that the coat hung straight over a dress. They hardly ever had buttons to hold them close, exposing the dress underneath and the matching lining found inside the coat. Decorative embroidery was more likely seen on fashion coats than on winter coats. Fur coats were glamorous and dressier than the everyday coat (for most people). They were cut in the same shapes as other coats of the fifties. The box coat and swagger style looked best with thick fox, sable, and seal fur. Faux furs were an option for the less affluent, as was cheap squirrel and marmot dyed to look like sable. Sleeves were wide and open and collars were high and closed with a longer hair fur piece trimming the collar. To keep with the simple and polished style of fur coats, only two or three buttons or clasps kept the coat closed. Some box styles only had a single clasp at the neckline. Pockets were hidden slashes on the coat sides. The beauty (and wealth) of the woman must be showcased through her 1950s fur coat! While most fur coats were full length or at least hip length, a few came in shorter waist length styles. The cape coat, popular in the 1940s, remained common into the 1950s as well. Coats like this short fur Diamond brand coat (right) became increasingly popular in the late ’50s and ’60s when styles favorited the slim sheath dress rather than the full circle dress.

For those who could not afford a full coat, fur stoles, muffs and shawls were a popular alternative. Fur trim on short or long jackets also added a touch of richness without the shocking price tag. 1950s raincoats were no longer just utilitarian and plain. They now came in fun patterns, such as the rain umbrellas in the below ad. They were made of a cotton + synthetic blended fabric for light waterproofing. Some were made of plastic (clear, color or patterned) that fit like a poncho hood and an elastic or wrap belt.  Non-rubberized raincoats existed in the form of waterproof tweed, corduroy and gabardine fabrics with an optional zip-in lining for warmth.

1950s raincoats mostly came in trench coat style with a single or double breast and belt. They often had matching hats, too. The above are Jockey style hats, while most others were detached hoods with the brim folded back (or not when raining). Popular colors were bright red, navy blue, medium blue, turquoise, and grey.

For the rebellious youth and especially art students, the trend was to wear black raincoats. These also became associated with prostitutes, although I don’t know why.  “Good women” chose brighter colors (pink, turquoise, red, yellow) and avoided dark colors, which were hard to be seen in the rain anyways. Read more details about vintage raincoats. While the most fashionable coat was the long coat or half coat, there were numerous needs for less formal, but very practical winter jackets called surcoats. Surcoat jackets were worn paired with long skirts or pants and were reserved for cold climates with excessive rain and snow. While useful, they were not entirely void of styles. Hip length, with tie belts and point or round collars, were trademarks of the ’50s. They came in warm quilted lined flannel, cotton or fur insides with leather, faux leather, tweed or corduroy exteriors.

Less winter friendly jackets had a fashionable style all of their own. Many were influenced by western styles and featured fringe leather, plaid patterns, and leather or suede looking materials. The corduroy western blazer was adopted from menswear as well as some 40s styles. It was smart, casual, and paired well with slacks or a plain skirt.

The yellow “motorcycle” jacket below, top, right, was another style borrowed from menswear. It usually came in a colorful leather but could also be made of cotton poplin or gabardine, just like a men’s bomber jacket. It was lighter in weight and usually worn in spring in classic men’s colors: navy, red, blue, or green. The poodle jacket was a fuzzy winter crop jacket with a wrap over design. It had large dolman sleeves and a narrow waistband. It looked best paired with suits and pencil dresses. Every winter, a handful of vintage reproduction jackets and long coats are sold. They are more fashionable than warm for very cold climates, so I prefer looking for vintage or classic coats and jackets in more durable materials such as trench coats, tweed jackets, wool overcoats, and suede bomber jackets. Adding a faux fur collar can instantly transform a classic coat into a vintage treasure. Shop 50s style coats and jackets. We are Debbie and Oscar, your guides to dressing up like decades past. We are here to help you find clothing online and learn about vintage fashions as worn by everyday people, just like you. Need help with your outfit? Ask us anytime.
« 1950s Plus Size Fashion & Clothing History
1940s Stockings: Hosiery, Nylons, and Socks History »