Denim has become such an accepted part of many people’s wardrobes that to imagine a time without jeans is almost impossible.

To some, it is even more incredulous to imagine that vintage jeans were actually designed in the late nineteenth century. As fashion trends have come and gone, there are very few items designed in the 1870s that we would still be comfortable and trend to wear today.

The History of Vintage Jeans

By the 1850s, denim fabric itself had already been around for years. However, in 1872, businessman Levi Strauss teamed up with tailor Jacob Davis to create workwear and clothing using denim fabric. By the following year, the pair applied and received a patent from the US Patent office; and denim jeans with reinforced rivets were born. The Levi’s iconic design also included a wing or double “M” shape stitched into the back pockets as well as a leather patch engraved with two horses trying to tear apart the sturdy jeans. For a long time, illiterate customers called them the “Two Horse” brand.

Jeans have seen many design changes over the years, from the wide flares of the 1970s to the skin-tight skinny jeans of the 2000s. Although vintage jeans were originally designed for workwear, this wardrobe staple has transcended the boundaries of a work uniform – only to become a uniform of another kind for a different era. In present times, jeans are almost an accepted wardrobe neutral. They have become a base on which to project ones style choices, as a blank canvas is to an artist. Even though jeans may be the fundamental clothing choice for today’s times, they can still be styled to suit a vintage look and lifestyle.

Take a look at the transition of women’s and men’s vintage jeans  through the years 1930 to 1970.

Men’s jeans had a head-start on women’s jeans, of around 50 years. The first styles of women’s jeans (although technically, these were not jeans as we would imagine them) were Levi’s ‘Freedom-Alls’ released in 1918. The ‘Freedom-Alls’ were a kind of denim two-piece, a tunic and trouser set. However, some years later Levi’s launched ‘Lady Levi’s’ in 1934. These were the first recognisable jeans for women. Adapted from the men’s ‘501’ jeans, these were given a ‘701’ style number. The style was aimed at women working on farmland, in agriculture, or at ranches. At this stage, vintage jeans were still very much work clothing. 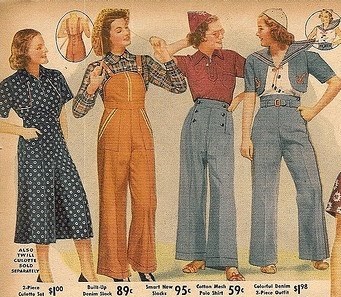 Women’s jeans were high waisted, gently skimming the hips and featuring a straight cut leg. They often had turn-ups/cuffs, and also featured front and back pockets for practicality.

Some denim was used to make pants for women that was not based on men’s work wear. These could include the iconic sailor pants popular in the 1930s and 1940s. The denim was lighter than blue jeans and usually did not come with pockets. These were not called jeans, just pants/trousers made with denim or heavy cotton.

Speaking of names. Blue jeans were not officially called “jeans” until the late 1950s. Instead they were called “overalls” but this confuses us today since we identify overalls with a different style (we will look at them in just a bit.) From the 1930s up to the 1950s, women’s styles of jeans remained fairly similar, although with small alterations in style details. WWII made them more popular as working Rosies took to factories and Land Girls worked the farms.

After the War,  women continued to work and wear jeans at home. It was the 1940s American teenager who adopted men’s jeans and made it part of her casual wardrobe, even in the city. A very loose fit with a rolled cuff was the signature style that lasted into the 1950s. A selection of jeans suitable for a 1940s look. Shop 1940s pants and jeans Whilst jeans started life in America, across the pond in Great Britain designers were realising the potential of this durable fabric. From the start of the 1900s, Morris Cooper was manufacturing work wear and military uniforms. By the 1950s, the company had renamed itself as ‘Lee Cooper’, and started to produce jeans for men, women and children. As jeans were initially designed for work wear, they are both durable and comfortable to wear. Thereby, this combination has facilitated both their consumer appeal and endurance over the years. As women started to wear pants more frequently from the 1950s, jeans became even more popular. Today a 1950s style can be created with high waisted slim cut jeans. Team with a blouse and neck scarf for a perfect casual style. By the 1960s, jeans still sat predominantly on the waist, although not as high on the waist as the styles of previous decades. During the 1950s and 1960s, jeans became synonymous with the culture of the teenager and youth rebellion. In 1955, James Dean starred in ‘Rebel Without a Cause’ – wearing a pair of Lee (not to be confused with Lee Cooper) jeans.

From the 1950s into the 1960s, jeans continued to get slimmer and tighter, mimicking the fit of women’s pants and capris.

Now jeans were worn as a sign of youth rebellion and were a firm wardrobe staple for the masses. By the 1970s, the shape of jeans changed. The bootcut style was developed in the early 1940s to accommodate the boots of rodeo and ranch workers. This style flared out slightly from below the knee, thereby creating a looser fit to skim over the wearer’s boots – coining the name boot cut. By the 1970s, the bootcut had a groovy makeover – turning into the bell bottom flares inspired by the sailor’s swabbies. Flares were worn all day and all night on the disco dance floor. Flared jeans sat high on the natural waist. They then hugged through the hips and thighs, flaring out from below the knee into a large bell shape. These jeans sometimes featured embellishments in the form of iron-on patches, decorative front pockets, hand-painted symbols, and embroideries. Personalizing jeans fit the anti-establishment attitude of the late 60s and 70s.

Flared jeans have made a bit of a come-back in recent years, and various styles can be found from most clothing stores. Team with a fitted t-shirt tucked into the jeans flicked out hair and platform heels for a perfect 1970s style. Styles of dungarees and overalls had been worn by women as work attire from around the time of WWI. However, denim dungarees did not become popular until around the mid 1940s. The Second World War brought about changes in roles and circumstances to many women. Denim overalls / dungarees were worn, as they were practical for a number of these roles. Today, overalls / dungarees maintain the practicality and durability that made them so popular when they were first produced. For a retro look, team a pair of overalls / dungarees with a short sleeved blouse and a headscarf. Finish the look with cute retro shoes like brogues or pumps and you are good to go! 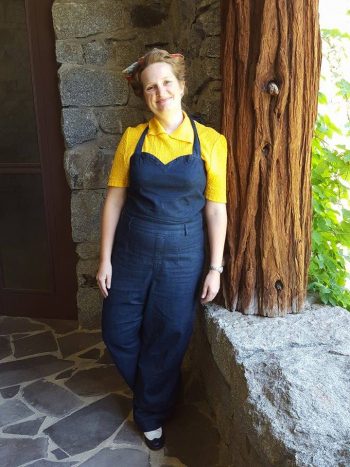 As with women’s styles, men’s jeans have changed in silhouette and shape to match the ebb and flow of the latest fashions. In 1924, the Lee company designed jeans for working cowboys with a deep U crotch in heavy denim, with rivets out of the way of the saddle.  In the 1926, their Cowboy jeans were the first to replace buttons with a zipper or “Hookless Fastener,” also named a “Whizit” after the sound it makes.  Lee also made specific jeans for sailors and loggers to accommodate their unique work needs.

Other changes in men’s jeans were the replacement of button or snap on suspenders with belt loops. In the 1940s and 1950s, jeans slimmed down, lowered the rise, and overall lost the workwear feel to become play clothes, especially for motorcycle riding and other “bad boy” interests.

The iconic Levi’s ‘501’ style, although it has altered slightly to match the latest trends, has also remained timeless. Levi’s have actually recently released a collection of styles reproduced from pieces in their archives, with many men’s styles included. A selection of vintage inspired jeans for men.

Within their vintage collection, jean styles span from the year 1890 with their ‘XX501’ style, up to 1969 with their ‘606’ style. These are sold online only in limited runs. Get yours while you can. These Levi’s 501 jeans are from their vintage collection, based on a style dating to 1915.

Whether it be rockabilly turn-ups or the sleek darker shades of denim favored by Elvis in ‘Jailhouse Rock’, there is certain to be a style of jean out there to suit every need and taste.

We are Debbie and Oscar, your guides to dressing up like decades past. We are here to help you find clothing online and learn about vintage fashions as worn by everyday people, just like you. Need help with your outfit? Ask us anytime.
« 1950s Shoe Styles: Heels, Flats, Sandals, Saddle Shoes
Men’s 1950s Shoes Styles- Classics to Saddles to Rockabilly »