Ever since AMC’s TV series Mad Men went on the air, there has been a lot of demand for vintage and vintage inspired early to mid 1960s Mad Men dresses. Classy ladies love the sexy pencil dresses worn by Joan, while our hearts resonate with Peggy’s innocent personality and cute retro style. Even Betty’s housewife glam is something to “ooo” and “ahh” over.  Thankfully, modern designers have rescued us from moth-eaten vintage frocks and brought back the fashions of the ’60s with modern Mad Men dresses. Let’s take a look at a few of the classic Mad Men clothing styles available today and where to buy them:

While most women didn’t wear their dresses as tight as Joan did, early 1960s women were into form-flattering pencil shapes. The pencil dress and pencil skirt came in various lengths. Your body shape will decide which length is appropriate for you- not your office morals : ). These were not meant to be worn tightly, rather the shape of the dress loosely outlined your natural body shape. Skirts had kick pleats on the back so that you could walk comfortably, rather than hobbling, down city streets.

Waist lines were still high up compared to later decades. Having a tight, tucked, thin waist had been in fashion since the 1940s and it wasn’t going to go away anytime soon. Proper waist cinching undergarments were a must for all clothing of this era. To add a vintage 60s inspired sheath dress to your wardrobe, simply look for a high round neck bodice and shapely fitted skirt. If you see one with a rounded collar or cute side tie, grab it fast. Colors range to suit you best. Plain colors more than patterns were seen on this style of dress. Formal occasions added more shine with jewel tone materials.

These sheath dresses are also called short cocktail dresses. Although the little black dress was developed in the 1920s, it really took off in the 1950s and 1960s. Think Breakfast at Tiffany’s. By season 4 of Mad Men, we start moving into the mid ’60s with plenty of vibrant colors. This is the time where we start to see a lot of bright orange, green, yellow, and loud plaids. Yikes! The sheath dress was still popular, but a little less form fitting and more straight on the body. Mad Men dresses still flattered the body and maintained the personality of the characters. So should yours.

1960s Dresses in the Swing to Pencil Styles

The full circle dress is what Betty and every 1950s housewife wore. They remained popular into the early 1960s, although perhaps a little less full than in the 1950s. The most common style of dress was the shirtwaist. It buttoned down the front like a blouse, fitting snugly over layers of underwear and slips, and then laid out over yards of gathered tulle. House dresses came in many patterns of checks, plaids, and flowers. The later into the 1960s, the brighter the colors became, and the less tulle petticoats were worn.

At the office, these dresses were worn with only a slip – no huge petticoats. Peggy is the champion of the office style circle dress. A bit dated from the 1950s, she didn’t quite fit into the modern look. Towards the final third season, her style took on more buttons and bold patterns to reflect her evolving fashionable personality. Other than a scene with Betty, women’s pants were not worn on Mad Men. It’s a shame, because cigarette pants are simply adorable and flattering on more body types than the popular 1950s Capri pants. Cigarette pants were usually black, flat front, and narrow down to the ankle. They remind me of long capris and are often confused with each other. They are slim, but not quite as body hugging as skinny pants are today. They are sometimes called ankle pants or crop pants. When a woman wore pants or a pencil skirt, it was always worn with an ultra cute top. These could be button-down blouses for a more casual look, or pullover sweater tops that buttoned at the back or shoulder. The plain fronted top with various styles of collars and ties were quite becoming on women in the 1960s.

A slightly more conservative woman may wear a matching top and cardigan sweater called a twin set. These pretty, soft knit sweaters usually buttoned on the top only, exposing the short sleeve shirt underneath. These are highly loved and collected today. If you also watch Glee, you will see Miss Pillsbury wearing twin sets with pencil skirts. Kitten heels or classic pumps were all that women wore in the office and, believe it or not, at home too! Kitten heels are small narrow heels on short, almost flat-like pumps. Decoration was minimal in favor of shoes that matched your dress perfectly. Toes were pointed instead of round and never had ankle or foot straps. A slingback was still OK for summer. Sandals were present but not popular. Shop for 1960s women’s shoes.

Purses always matched a Mad Men vintage outfit.  It was a signature of a well polished lady. The signature style for daywear was a flat, square, or slightly rectangular shaped leather purse with a single arm strap in either leather or gold chain. For evenings or special occasions, plastic Lucite clutch purses were a short lived but very big fad in the early ’60s. These cute rounded bags opened with a clasp or had a short gold chain. Fabric or leather clutches were also common and also always matched the dress. Shop purses.

If you have a mother or grandmother who was a young woman in the 1950s and 1960s, then you probably have noticed that they still wear a strand of pearls with their dresses. Pearl necklaces were the item to have and wear. The fad was started by Jackie Kennedy and remained very popular throughout the ’50s and ’60s. I’m sure other gold jewelry was worn, but the pearls were a stamp of fashion and sophistication. The other popular jewelry element was the brooch or pin. Usually gold or accented in pearls every dress, sweater, or jacket wore one on the upper right side. Flowers, leaves, and sometime animals were shaped into fancy gold pins. Colorful gems acted as the flower center with sprays of gold petals surrounding it. Evening wear was extra sparkly with rhinestones or fancy small diamonds throughout the design. Learn about 1950s and 1960s jewelry styles. This was the last decade where a woman wasn’t a woman if she didn’t wear a hat. In the show we didn’t see women wearing hats much since they took them off in the office. To and from work was a different story. Women’s hats came in a variety of shapes and styles. Felt was the main material, shaped into cloche like hats with wide brims, or sculpted into angular shapes and balanced at an angle. One unique shaped hat style had a crescent shape to it that pinched the head on either side of the head leaving the back of the head uncovered. These were ideal for hairstyles, like Joan’s French twists, because it didn’t mess up the hair when taken off. Shop 60s hats. 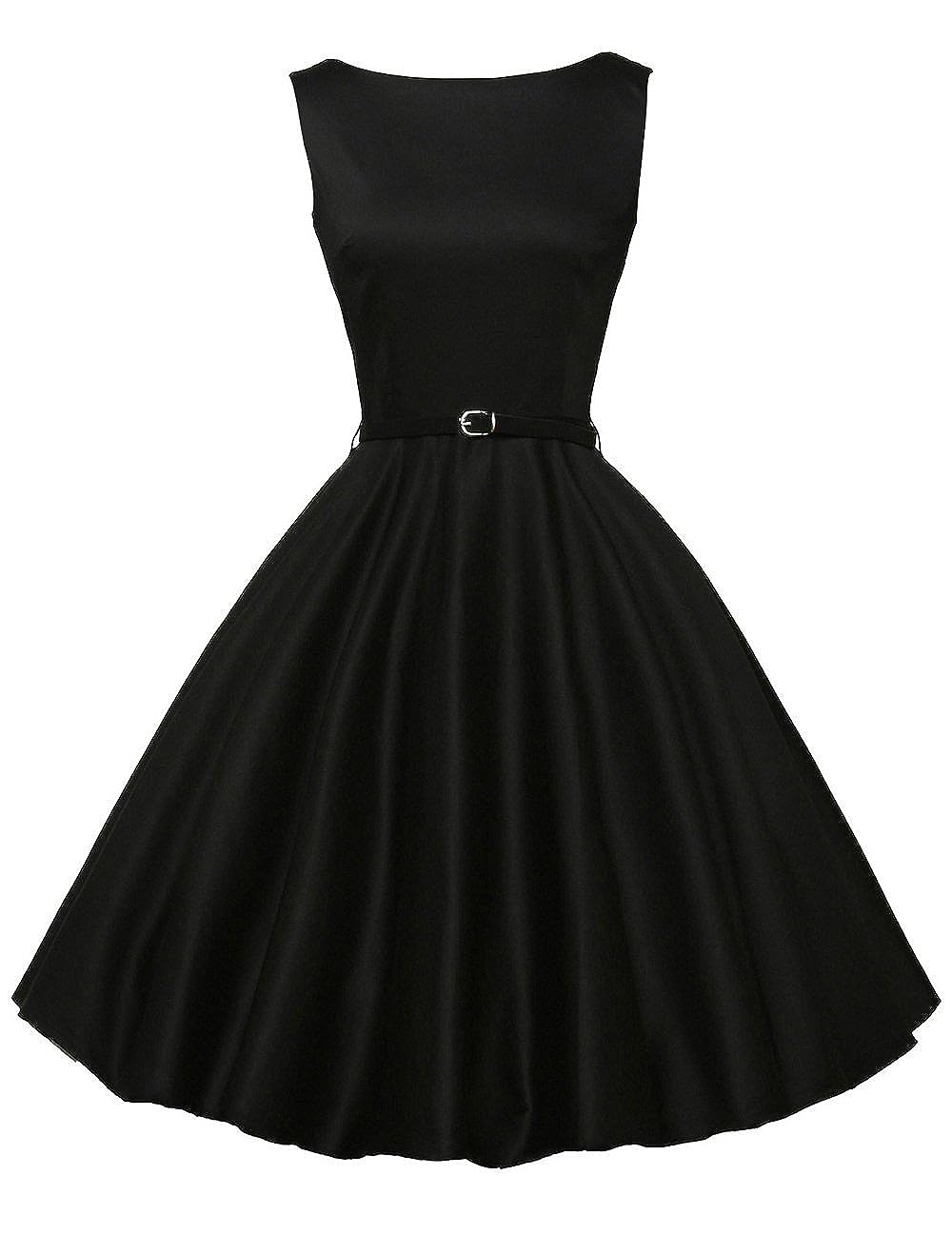 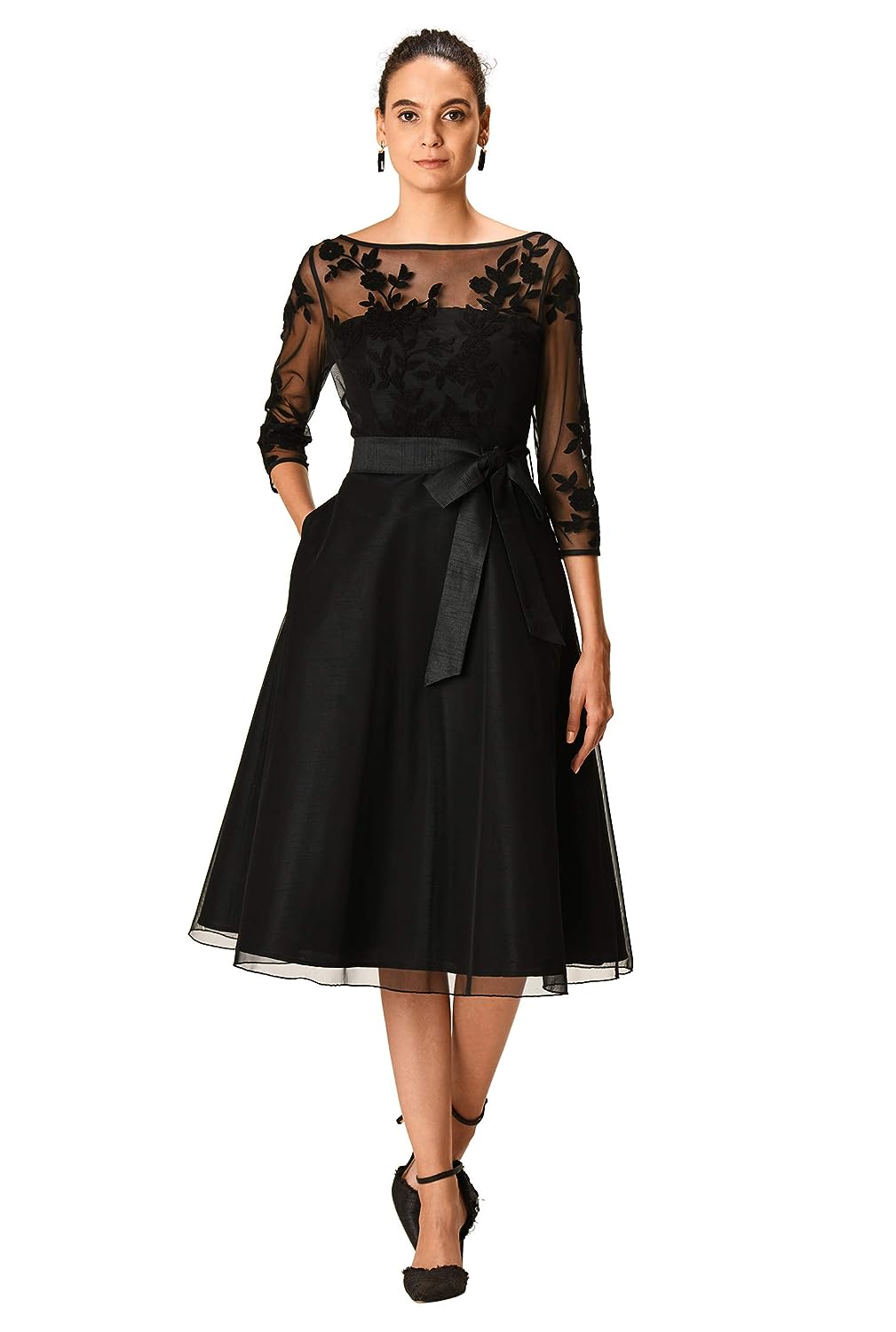 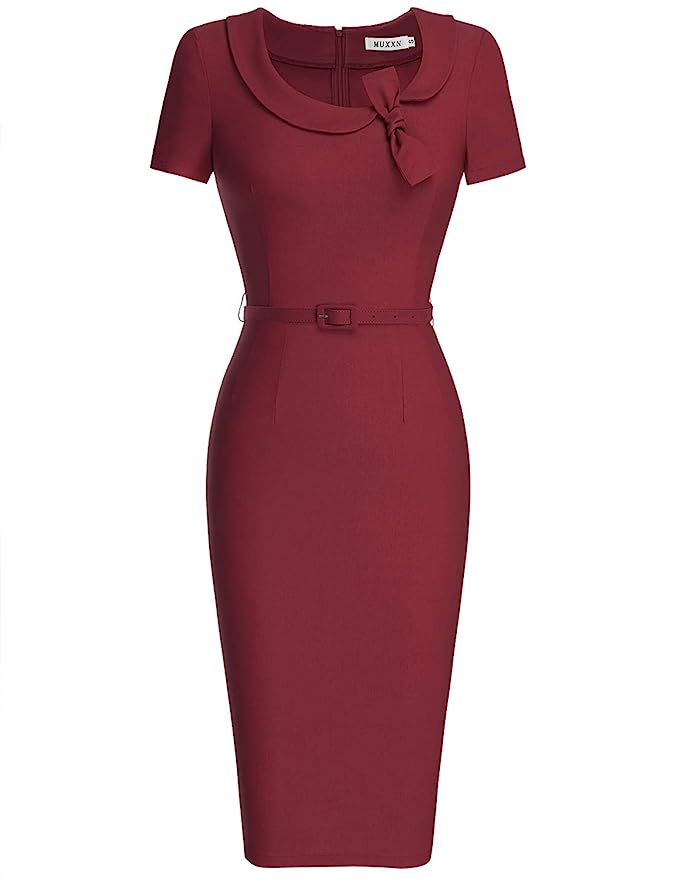 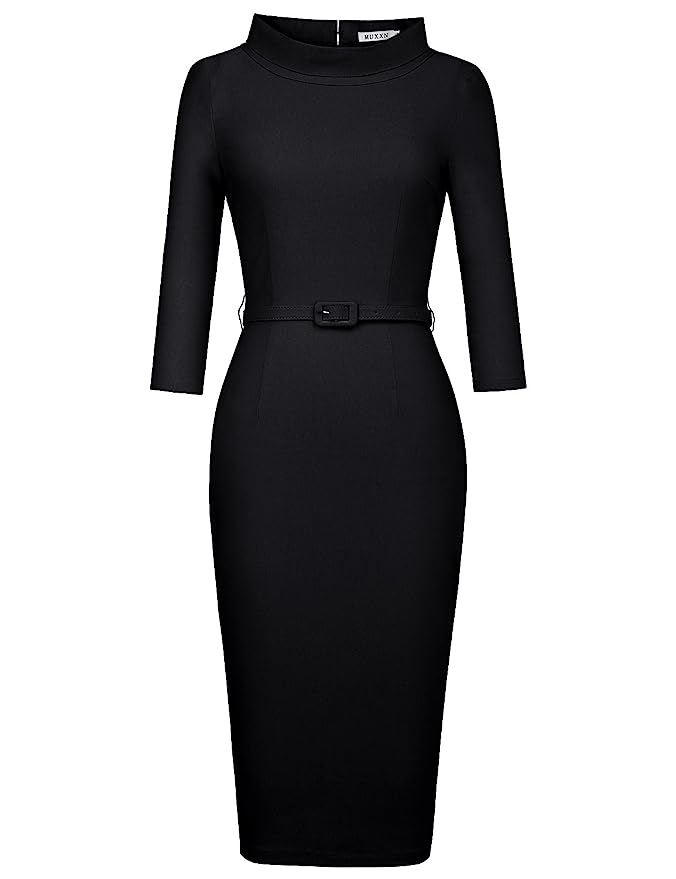 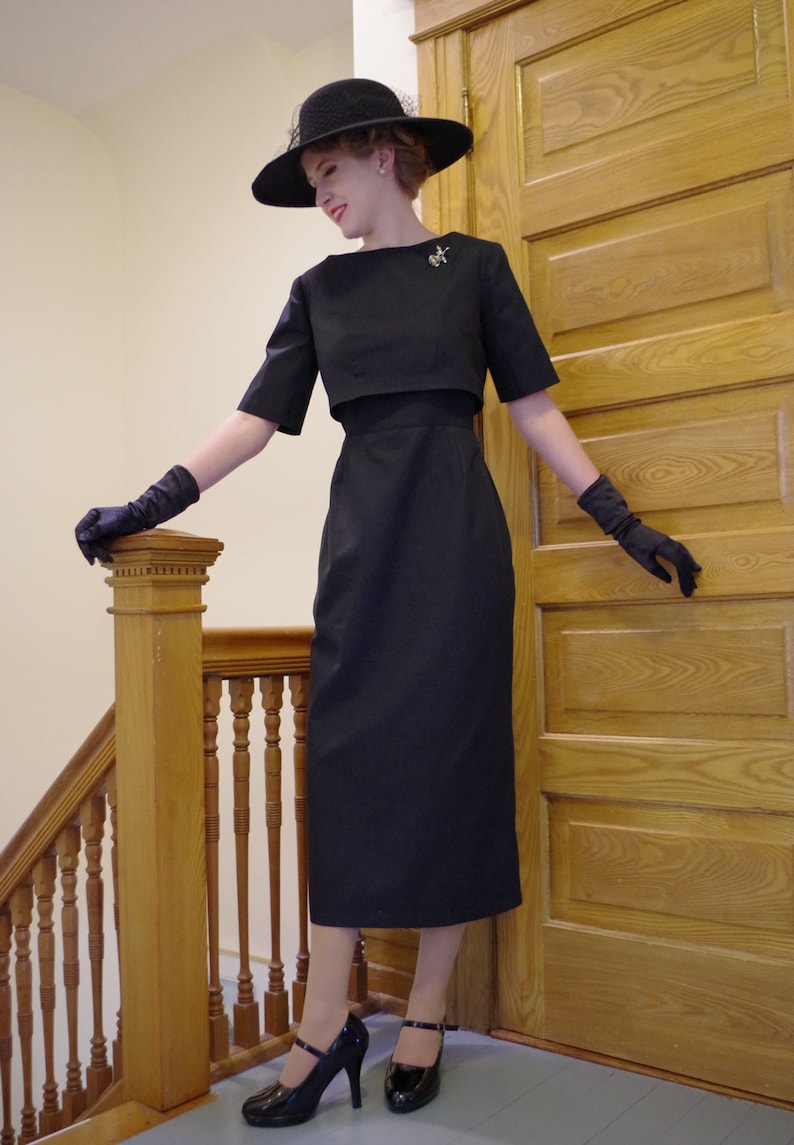 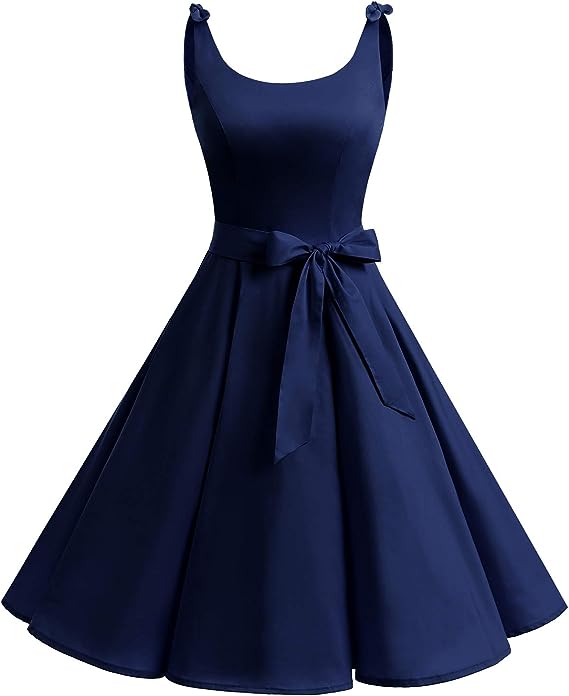 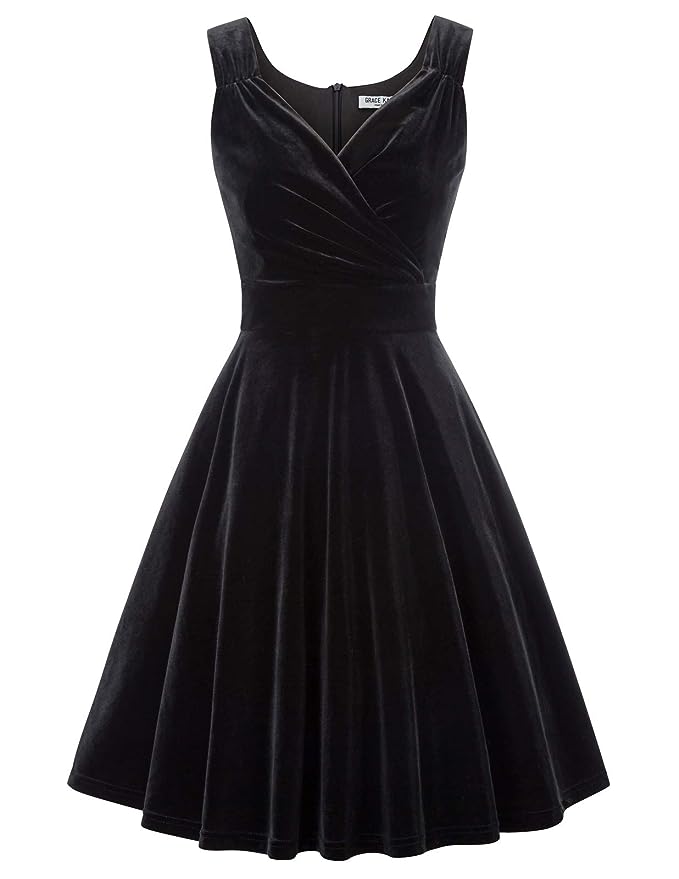 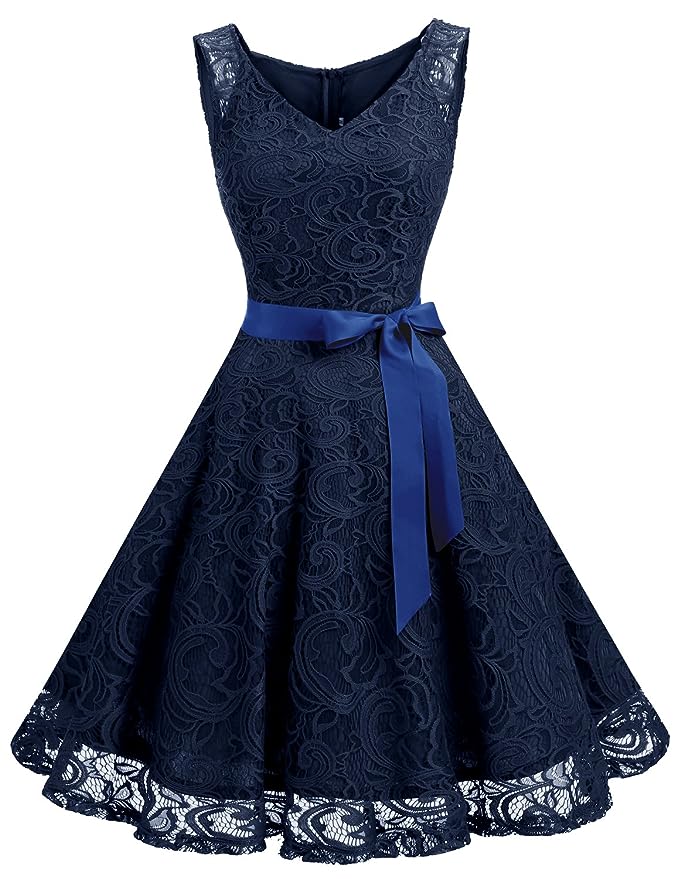 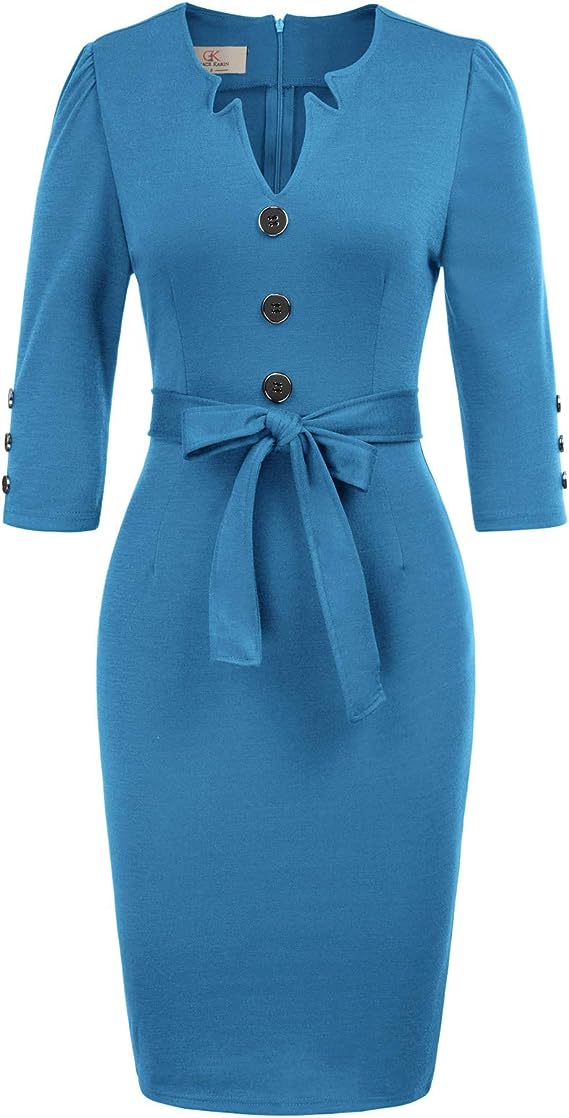 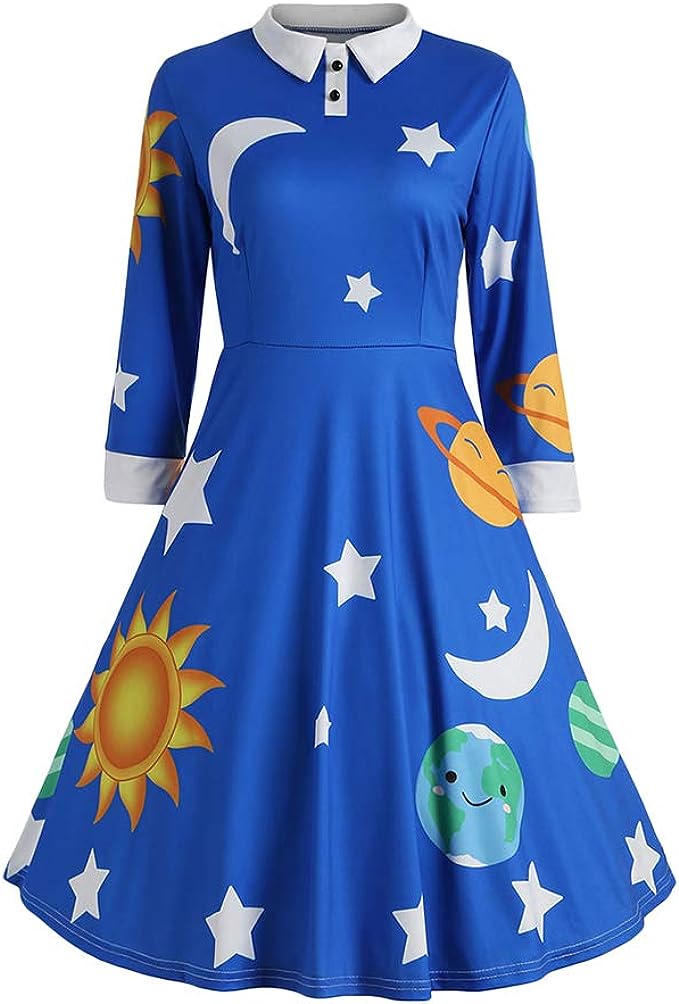 We are Debbie and Oscar, your guides to dressing up like decades past. We are here to help you find clothing online and learn about vintage fashions as worn by everyday people, just like you. Need help with your outfit? Ask us anytime.
« 1890s-1900s Fashion, Clothing, Costumes
Ten 1950s Dress Styles | Vintage 50s Dresses »