The Peaky Blinders TV series has captured audiences around the world with gritty, somewhat true accounts of the lives of Birmingham’s criminal gang Peaky Blinders. The fascination with the 1920s era, gangster life, and questionable characters have led to an interest in early ’20s men’s clothing as worn in the mini-series. Tom Shelby’s character is the most admired style, featuring grey or blue tweed suits, club collar shirts, a long overcoat, lace-up boots, and an iconic grey 8-panel cap. Creating a Peaky Blinders outfit or Peaky Blinders costume is possible thanks to a revival of vintage 1920s inspired men’s clothing. I will show you not only what to look for, but where to buy it online in the UK and USA for reasonable prices.

Shop the Peaky Blinders look at Amazon or scroll to the end for more shopping links. For all 5 seasons, Thomas Shelby has worn the same suit with only some moderate changes in the last two seasons. Set in 1919, which was somewhere in between Edwardian fashion and roaring 20s style, there was the look of the Jazz Age. Men’s Jazz suits that had slim fitting high waisted pants with a tapered cuff hitting slightly above the ankle, a narrow shoulder sack suit coat (loose and straight) with peak or notch lapels, and a matching 5 or 6 button vest. Only the upper and middle classes could afford a new suit, so most people living in Birmingham would have worn older, second-hand clothes that may not have matched or fit well. Wearing a suit without a vest was a common sign a man was working poor. Shelby being a man of the lower class, but having some wealth, he dressed a little better than the neighborhood gang while also being careless in his choice of clothing. Shelby’s suit was usually made of a grey tweed and later a blue wool. Blue suits became very popular around 1924, when season 3 was set, noting a fashion move from the drab post-war years to the colorful roaring ’20s. Wool suits were quite heavy compared to today’s fine suiting material, and the weight gave it a thick textured look to it. You won’t find this fabric available today unless you have a suit custom made. The closest new suits are a textured tweed or faux tweed pattern. The fit is slim, but not skinny.  Most modern skinny suits that are on trend now are even slimmer fitting, but easier to find and more affordable than reproduction 20s Jazz Suits. Shop suits. Other suits worn by Shelby and his gang include brown wool, windowpane blue, pinstripe, and chalk stripe in blue and a tweedy brown-green. There were no black suits or brighter colors, even in summer, in this part of the world. If you want a look that better fits the later seasons (set in 1924 and 1926), your suit will need to feature wide legs with a below ankle length, wide jacket lapels, and a looser fit. Men’s fashion at this time was enjoying greater freedoms of movement, color, and lighter materials. Read more about the history of men’s 1920s suits. 6 button vest matching the suit with a pocket watch

The vest the suit comes with fits short on the torso because the pants came up high to the rib cage. Modern pants are low-waisted, requiring a longer vest to cover the torso (exposed shirt between pant and vest is taboo). Around 1922, vests started to feature notch lapels. Shelby wore a few of these in the later seasons. Shop men’s vests.

The pocket watch looks to be gold plated (alternative cheaper watches were nickel plated). We don’t get a clear view of the watch face, but most watches at the time had a white face and script front like this one: Suit trousers rose high on the waist, ballooned out over the hip, and had a deep crotch and a narrow leg that ended with a 2-inch cuff around the ankle. The length of the trouser exposed men’s boots, but gradually dropped below the ankle by the mid-20s. Shelby’s short pants were a sign he was a few years behind the fashion trends. Shop just pants. Trousers were worn with suspenders or braces to hold them up. They buttoned on the inside with a Y or X back. They were usually made of striped elastic webbing, although leather was also an option for heavy duty use. Shop suspenders. To our modern eyes, the most unusual thing about the Peaky Blinders men is the wearing of white, round, detachable collar shirts.  Detachable collars made is easy to clean or replace white collars without the expense of buying a new shirt. The round collar, often called a club collar, was the primary shirt collar of the late teens and early ’20s. By the mid-’20s, the classic pointed collar began to replace the round collar. Collars and cuffs were almost always white until the mid to late 20s. The shirt body was hardly ever white, instead favoring vertical stripes in blue and grey with brighter colors — yellow, pink, purple, and green — joining in by the mid-20s.  The fit of dress shirts was quite wide and boxy — no slim fit yet! The cuffs were held together with cuff links, an accessory that displayed a man’s wealth (or lack thereof). 1922 men’s striped shirt with white round collar and cufflinks Neckties or bowties were worn with men’s dress suits and shirts. Shelby tended to not wear either, a fashion faux pax unless the occasion called for it. He preferred dark solid colors — black, blue, or burgundy on regular or skinny widths. I occasionally saw him wearing a paisley or Macclesfield tie for dressy occasions. In reality, ’20s ties were much more colorful than what Shelby wore. These were artistic liberties made by the costume designer reflecting Shelby’s dark character.  Other cast members wore similar neckties and or bowties in polka prints or tweed. Shop ties and bowties. Casual caps for these working-class criminals Most of the Peaky Blinders gang and general working-class men wore caps for hats. They were wide and floppy 8-panel caps made of wool or tweed. They were the most affordable hat and durable for manual labor work. It may seem out of place to see a ’20s man wearing a nice suit with a casual hat, but it was trendy, especially with young men and working classes, in the late teens/early ’20s.  Colors ranged from medium grey to dark grey, brown to green, in heavy tweed textures like the suits. Wealthier men topped their heads with felt hats like the fedora, Homburg, or bowler. Shelby’s overcoat was an outdated Edwardian style with black velvet collar, moderate peak lapels, and a fitted waist. It would have been expensive, even used, therefore appropriate for his character, but wearing it clearly shows he was not up to date on fashion. Other men’s coats were more in line with a 1920s style that favored long straight lines, oversized wide lapels, large patch pockets and one but more often double rows of buttons. Coat colors were brown, grey or blue — hardly ever black (another artistic liberty by the costume department). The final element of a Peaky Blinders outfit ends at the feet. Working class men wore lace-up leather boots in black or brown with a thick sole and a cap toe. Gentlemen’s dress boots for business or pleasure were a similar design, but with a thinner sole, shaped toe, and decorative broguing or wingtip perforations.  The photo below shows Shelby in the middle wearing two-tone brown lace-up boots. This was for a dressy occasion. Otherwise, he wore black lace-up cap toe boots. The man on the far right is wearing Oxford shoes, a newer option for gentlemen. Shop boots and shoes. 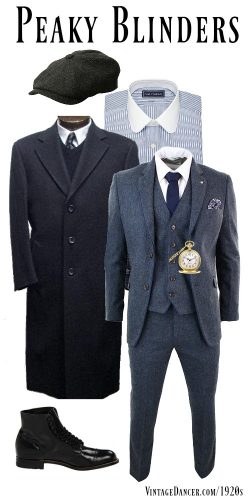 The following are some of the best Peaky Blinders outfit or costume pieces available online at a reasonable price. You can certainly get a custom made or higher quality reproduction outfit from a number of online tailors but for the average man, these are out of reach financially.

For the annual Lake Tahoe Great Gatsby Festival, Oscar chose to dress like Thomas Shelby. We sourced his costume from a mixture of pieces we already owned and some we ordered last minute on Amazon. Oscar also chose to have me cut his hair in Shelby’s style which is very handsome on him and on-trend now. Vintage is back! With cap and accessories Need help with your Peaky Blinders outfit? Ask us anytime.

We are Debbie and Oscar, your guides to dressing up like decades past. We are here to help you find clothing online and learn about vintage fashions as worn by everyday people, just like you. Need help with your outfit? Ask us anytime.
« Victorian Fashion – 1840s to 1890s
1930s Hairstyles for Long Hair »