The 1920s and 1930s are mostly associated with flapper dresses and Hollywood glamour. During the daytime, dresses were still the primary outfits, but that doesn’t mean they were the only thing women wore. I had a few readers ask what kinds of casual ’20s clothing or ’30s menswear-inspired looks they could wear that involved pants, not dresses. Using thrifted and purchased clothes, I put together some 1920s casual outfits with the help of my sister as my model that embrace the rebellious anti -flapper or masculine women’s looks of the ’20s and ’30s.

The first 1920s outfit was inspired by my research of women wearing pants. Some young women decided to adopt menswear as their clothing style as a statement against the flapper movement. Sometimes called “New Women,” they dressed casually in men’s knickers or wide leg pants, collared blouses, long neckties, 8 panel caps, and men’s jackets.  Plaid or tweed pants and jackets were especially common in fall or winter, while solid color cotton knickers with tall socks were worn in summer.  A pair of low heel Oxfords were neither feminine or masculine, and they completed the outfit. For my DIY 1920s outfit, I found a pair of wide leg plaid brown pants (90s vintage), rust colored Peter Pan collar blouse with black tie (Forever 21), tweed check coat from Pendleton (a repro from their original 1910s line), plaid vest, and tweed flat cap. Whenever I source menswear clothing for women, I try to find them in women’s clothing, but sometimes it is easier to buy them in men’s. Vests, for example, are not “in style” for women, but men’s ’20s vests work just fine. 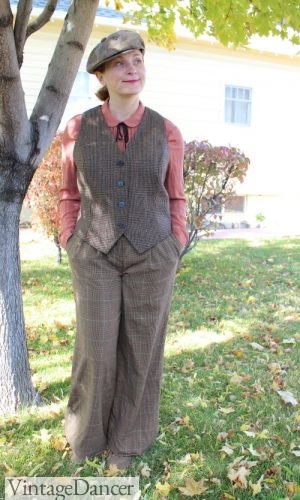 I love the belt back of this jacket A new (thrifted) sweater with large collar was the perfect top for this winter 20s casual style.

I was very excited to find a 1910s-1920s style cardigan sweater at the thrift store (see above photo). The chunky knit deep burgundy red cardigan with an oversized collar and big buttons jumped in my cart. Paired with the same wide leg pants and flat cap above, it easily makes a 1920s casual outfit perfect for fall and winter’s cool days.

I could wear the sweater with a long wool skirt, too, and have a second early ’20s outfit. For spring, wearing the sweater unbuttoned with a belt around the waist and over a flowing pleated skirt takes the look to a sporty relaxed style. Here is another outfit I made using a 1920s style cardigan sweater over a blouse and pleated skirt.  It is one I wear often (although usually with jeans, not skirts). Striped varsity sweaters are in fashion now, so this look is easy to attain. Paired with a cloche hat and two tone Oxfords (saddle shoes would work too), the look is both vintage and modern casual. A reader wanted help finding a 1930s style Marlene Dietrich suit. That is no easy feat, but I was up for the challenge. Marlene usually bought men’s suits and had them tailored to her body. Most women at the time who adopted menswear clothing did this as well. Women’s menswear was not a big enough fad for mainstream clothiers to produce them for the masses.

For accuracy, purchasing a 1930s reproduction suit, sewing a suit, or buying a vintage men’s suit and tailoring them is the best option. For the rest of us on a budget, you can adapt a thrifted women’s suit to the look easily — that is, IF you can find a suit to begin with. I found this grey check suit, but it was the only option that didn’t look totally out of place/ the wrong decade in the several stores I shopped. I searched online, too, but most modern suits have skinny pants (not wide leg) and plain blazers that resemble ’60s fashions, not 1930s. Finding a menswear 1930s outfit was a lot harder than I expected.

Marlene Dietrich in a pant suit

Removing the jacket and wearing the pants with a white button-down collared shirt, dark necktie, and vest creates the same masculine ’30s outfit but without the difficulty of finding a matching suit set. Wearing a fedora hat instead of cloche transforms it into a gangster moll costume (wives of gangsters / female gangsters). These 1920s and 1930s outfits should give you some ideas for menswear-inspired women’s looks. Look at these 1920s non-flapper outfit ideas for even more looks.

Do you have a look you need help with? Ask me anytime!

Breeches (knicker pants) were the most common types of pants for women in the 1920s.  Similar long riding jodhpurs were worn for ranch work, horse riding and various other rugged sports.  Read more about them here.

For a 1920s outfit with breeches begin with a reproduction of inspired pair of breeches, plus fours (golf knickers), vintage riding jodhpurs or a pair of long pants cut off below the knee.  Add a men’s style button down blouse, thin necktie or neck scarf, tall llace up boots (or shorter boots with tall socks), a wide brim hat or Gatsby cap, and an optional blazer type coat or sweater.  Have fun with this outfit! Ideally I need to find tall lace up boots that will fit a wide calf but short boots were available in the 1920s and 1930s too.  My grandmother wore mid calf tall hiking boots in the 1920s. For  quick beach pajama outfits begin with a pair of wide leg palazzo pants. You can also use a silky or velvet pair of pajama bottoms. Add a loose blouse and a velvet wrap coat like the one above. For shoes focus on flat slippers or low heel pumps.  A turban headwrap is the best hat or hairstyle to use for this outfit. We are Debbie and Oscar, your guides to dressing up like decades past. We are here to help you find clothing online and learn about vintage fashions as worn by everyday people, just like you. Need help with your outfit? Ask us anytime.
« 1960s Evening Dresses, Bridesmaids, Mothers Gowns
1960s Wedding History: Brides, Bridesmaids, Mothers »